Stephen Sizer of the Church of England offers a recommendation:

It is a link to an insane piece on the Palestine Telegraph website. It claims Israel has bumped off hundreds of nuclear scientists around the world, including by arranging plane crashes.

The author of the piece is Wayne Madsen, an antisemitic conspiracy theorist. For another measure of Madsen’s sickness and madness, see this interview. An excerpt:

I don’t believe the [9/11] attacks were planned by the FBI. I believe they were an operation carried out by Mossad, Saudi intelligence, with which Mossad has had and continues to have a close relationship since the days of the Safari Club of western and Middle East intelligence services combining their operations, and elements of the CIA. Cossiga, Gul, parliament members in Germany, Britain, and Japan, the late British Foreign Secretary Robin Cook, and others all understood this was an inside job that also involved a handful of people at the top of the Bush administration, including Dick Cheney, Donald Rumsfeld, A.B.Krongard of the CIA, and Rudolph Giuliani, as well.

The Palestine Telegraph is of course the hate publishing operation of Sameh Habeeb. Here are just a few examples of what it gets up to:

– Publishing a ludicrous story about Israelis stealing organs in Haiti after the earthquake.

– Running a piece by the racist Khalid “Kikes” Amayreh where he argues the USA is far more evil than Osama Bin Laden.

– Threatening legal action against “Nothing British About the BNP” when it criticised Habeeb for his role in inviting Hungarian neo-fascist Krisztina Morvai of the Jobbik party to a London conference of the pro-Hamas Palestinian Return Centre.

– Publishing another Israelis-are-Nazis slur and a ludicrous terrorism denial piece by Mahboob Khawaja. No wonder Khawaja engages in terrorism denial: his own son, Mohammed Momin Khawaja, was convicted in 2009 of taking part in the UK fertiliser bomb plot. The judge in the case suggested he should have known what his son was up to. For example by noticing the, er, collection of rifles and crates of ammunition in the basement of the family home.

No wonder Sizer reads the Palestine Telegraph. He must love it.

The PSC likes him too. It is advertising two of his speaking events – a talk at Friends Meeting House in York on 20 July and another at Halifax Minster on 21 July. (Click to enlarge the images.) 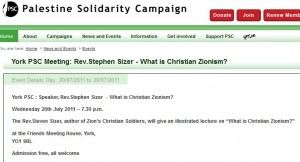 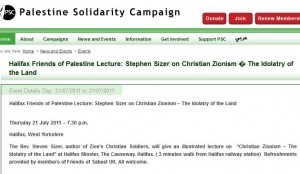 If you would like to ask the Church of England if it is at all concerned about one of its men promoting a hate publisher and an antisemitic conspiracy theorist, please write to Sizer’s Bishop in Guildford through Mary.Morris@cofeguildford.org.uk and cc contact@lambethpalace.org.uk.

Stephen Sizer smearing Zionists in Malaysia last month, where he was helping Viva Palestina Malaysia, a band of racists and material and political supporters of Hamas.