The Palestine Telegraph– which still lists George Galloway and Lauren Booth on its “Board of Patrons”– features an extended sympathetic interview with Fredrick Toben, a leading Holocaust denier. 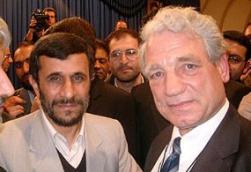 Dr. Fredrick Toben is a German author and founder and former director of the Adelaide Institute. He has written numerous books on education, political science and history and is best known as a historical revisionist who has extensively argued the veracity of Holocaust accounts by the Jewish historians. Due to his holocaust denial, he has been imprisoned three times in Germany, United Kingdom and Australia.

Here is a segment of Toben’s rambling, as published by the Palestine Telegraph:

FT: The Second World War’s legacy is still with us to this day and that is why it is important to have an historical perspective on all this, namely that World War One and World War Two were actually a 30-year war period, which can be called a European civil war. The outcome was the establishment of the State of Israel that is quite clear when one asks: who benefited from this conflict? The Zionist program of the 1890s had come to fruition at the expense of the Palestinians. The fabricated ‘Holocaust’ narrative assists in cementing the myth that Palestine was a land without people, and the world knows that to this day ethnic cleansing continues unabated with the western democracies not lifting a finger to stop this process.

When White House correspondent of over 50 years, Lebanese Helen Thomas, was asked about the Palestinian crisis she responded honestly: send the Jews back home. Where is home, she was asked. Germany and Poland, she replied. The next day she apologized and lost her job.

It must be remembered that any kind of war is multi-faceted, as we witnessed in our time with the Iraq-Iran war, the 2003 Iraq invasion by the Anglo-American-Zionist forces, the Afghan conflict and the current intention by these forces to attack Iran.

The ideological battle lines are still national versus international, and not the false dialectic of left and right-wing politics, as Anthony Lowenstein wishes to believe. As a Jew Lowenstein opposes the Zionists but believes in the ‘Holocaust’ ideology-lies as well as in the Marxist-Trotskyist nonsense that is based on Talmud thinking.

KZ: Your viewpoint regarding Holocaust has been usually distorted and misrepresented. What’s your exact stance on it? Did the mass killing of Jews by the Nazi forces in concentration camps take place? Has its extent been exaggerated by the Israelis to attract the commiseration of the Western powers? Is it being employed as an instrument of subjugating and oppressing the Palestinian people?

FT: I follow Professors Arthur Butz and Robert Faurisson in their deliberations on this topic, and both conclude that the premise, pillars on which the ‘Holocaust’ narrative rests, 6 million Jews killed, systematic state extermination policy, murder weapon a gas chamber, cannot be sustained as being the truth of the matter. As Butz says, it is rubbish to hold such a view, and Faurisson calls it a lie. It is not for Revisionists to prove their assertions but for those who believe in the ‘Holocaust’ to prove their case, which to date has not been done. Faurisson’s challenge: ‘Show me or draw me the homicidal gas chambers at Auschwitz’ has not been taken up by anyone. What does happen is legal persecution that leads to personal and financial ruin and imprisonment. That speaks for itself, and then there is the defamation of those who refuse to believe in the ‘Holocaust’ with the following shut-up words, hater, Holocaust denier, antisemitist, racist, Nazi, and even terrorist.

It is thanks to the courageous Iranian President, Dr Mahmoud Ahmadinejad, who informed the world that the ‘Holocaust’ is being misused by those who oppress the Palestinian people. This linkage is fundamental in solving the crisis facing the Middle East, and only after its resolution will the area come to rest. The focus on Iran as a rogue nuclear state is a mere pretext used by the Anglo-American-Zionist powers to retain the myth of the Zionist entity called Israel.

Now I know Galloway, who has said that Holocaust denial should be a crime, will be outraged at this news. He will resign from the Palestine Telegraph’s Board of Patrons and call for the rearrest of Toben. The only question is whether he will demand the prosecution of the PT’s founder, Sameh Habeeb, for propagating the views of a Holocaust denier.

Here, for those who missed it, are Galloway and Habeeb exchanging views about Harry’s Place (starting about 6:00) on his Press TV program earlier this year.