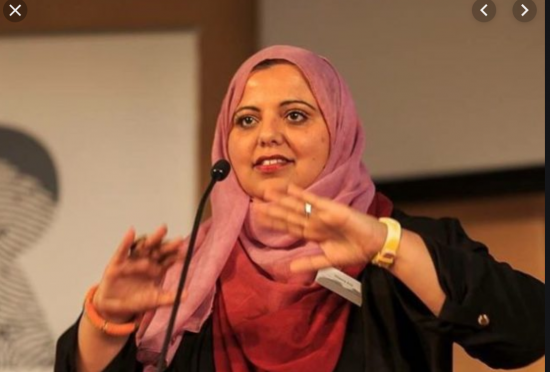 Although I am writing a response to yesterday’s post because there were several elements in it – and particularly in some of the further reactions – which I disagreed with, I do understand why readers have found some of Shaista Aziz’s words disconcerting.

I’ll begin with a brief discussion of her 2004 article ‘On the Street’. Here she describes how she travelled to the Middle East to engage in a range of (peaceful) activities inspired by her pro-Palestinian sympathies.

My jihad – my personal journey to learn more about the struggle of my fellow Muslim brothers and sisters – enabled me to have direct contact with Palestinian and Israeli activists working towards establishing a just peace for both sets of people, and also brought me closer to my faith.

Although I can understand why it might be thought that Shaista Aziz was condoning the terrorist murders of Israelis she goes on to describe, my own sense was that she condemned them, but failed to make this absolutely clear – perhaps because she took it for granted this could be taken as read. This certainly ties in with Aziz’s own statement yesterday.

I wrote clearly about sick ideology of terrorists twisting their interpretation of faith and to justify killing innocent people.

Having defended – at least up to a point – Aziz’s original post, I’d also like to invite those who thought yesterday’s Harry’s Place article no more than a ‘smear’ to look again at ‘On the Street’ in order to understand how it could be misread.

Given how often depictions of the Star of David are vectors of antisemitism I can quite see why people might find this comment disturbing:

When I saw that body bag with the star of David  on it, something inside me snapped.

However I would differentiate between her emotion when seeing the sign of another religion in this highly charged context, and actively antisemitic usages. (By analogy, perhaps someone very sympathetic to Israel might feel upset by seeing Islamic symbols used on body bags covering the bodies of IDF soldiers in a conflict.)

This is not to say that I find the article in question – ‘How I became a Terror Tourist’ – sympathetic.  It demonstrates no empathy with the Israeli perspective – no attempt to understand, for example, why the Israelis might be nervous of ambulances. This is predictably consistent with the fact she travelled with the ISM.

Her careless use of the term ‘Zionist’ as a term of abuse is another problem – demonstrated in yesterday’s article by a selection of tweets from 2011.

I think this is an issue which a lot of people have learned more about over the last few years.  For example a relative recently described how she had always assumed ‘Zionist’ meant something really hard line and zealous but now understood that the term included those who simply supported Israel’s right to exist – including fierce critics of Netanyahu’s policies. I think this is what Aziz is getting at in this recent tweet. 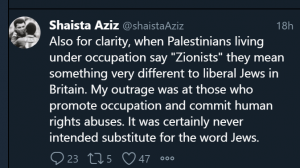 And here’s another helpful explanation/apology. 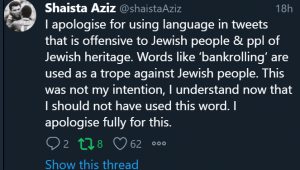 I’d like to turn finally to Shaista Aziz’s more recent record.  Although local activism cannot always be fully evidenced with documentation I have spoken with someone who has first hand knowledge of her track record on these issues and can report that she has demonstrated a forthright and genuine support for those opposing antisemitism – and that this includes supporting the IHRA definition and examples at an early stage of those debates.

I believe her views on this are evidenced – albeit a little obliquely – here. 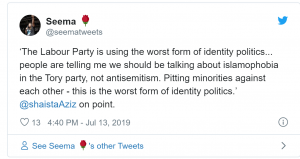 Shaista Aziz has clearly really divided commentators, including many who are often in broad agreement with each other.  I’d like to encourage those who have condemned her to look again, and see whether at least some of her comments can be viewed in a different light. But I hope those standing up for her can understand why others might, in good faith, have been really concerned. As so often, this has become a more binary divide than necessary – you can disagree significantly with Shaista Aziz while recognizing that she seems to have nuanced her approach over the years, and of course acknowledging that she isn’t in the same category as some of the many recent disastrous candidates Labour has selected to stand for office.