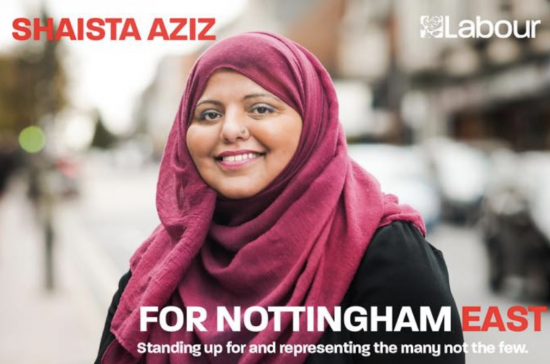 Shaista Aziz is on the shortlist to be the Prospective Parliamentary Candidate for Labour for the constituency of Nottingham East.

She has the support of Owen Jones:

It was a huge honour to help organise the anti-Trump protests with Shaista. She’s an incredible campaigner on everything from homelessness to child poverty and she would make a superb MP. https://t.co/4xzBOoGcJL

On a BBC Q and A (publicising a documentary she made for them) she says:

“I’m a British, Pakistani, Muslim, European woman, a journalist, a storyteller and I dabble in stand-up comedy. I’m a professional nomad! I’ve spent more than ten years working across the Middle East including Palestine, Lebanon, Iraq and Syria, Yemen with a number of international aid organisation gathering stories. I’ve had the absolute privilege and honour to meet incredible people and tell their stories. It’s something I never take for granted.”

A few other things make her a great candidate to be a Labour PPC.

At the height of the al Aqsa Intifada she volunteered with the International Solidarity Movement in Nablus in the Northern West Bank. She wrote an article about why Muslims are going off to Jihad in an article here where she claims that:

“In 2002, I packed my bags and headed for the occupied Palestinian territories to participate in jihad”

She elaborates that for her Jihad means “struggle”…as it did for the British suicide bombers who murdered several innocent people at the Mikes Place pub on Tel Aviv beach:

It’s the duty of every Muslim to engage in jihad. The word literally means ‘struggle’ and is very rarely used correctly by the Western media who believe it only means ‘holy war’.

There are two levels of jihad: the greater jihad is what every Muslim should be striving for – the quest to follow through with their faith in all aspects of their daily lives and the ongoing internal struggle to become a stronger Muslim, a more compassionate and kinder human. The lesser jihad is the duty of all Muslims to protect one’s religion and people, and if needs be take up arms to do so.

It was the same strong belief in Islam that motivated two other British Muslims to travel to Israel in April last year and engage in what they perceived as their jihad. Omar Sharif, 27 and Asif Hanif, 21 were recruited by the armed Palestinian group Hamas to travel to Tel-Aviv where it is believed they assembled bombs that they later strapped to their torsos. Hanif detonated his bomb outside a busy bar in the city, killing himself and three others and injuring 65. Sharif’s bomb failed to detonate and he fled from the scene. His body was found 12 days later in the sea off the Israeli coast.

This was the time when Hamas were sending suicide bombers onto buses to murder civilians. In a second article entitled How I Became a Terror Tourist she writes how grotesque it was to see a Jewish Star of David on a body bag:

These tweets are all pretty old, from 2011, so if she no longer holds these views it shouldn’t be a problem for her to say so and move on with her campaign:

The honourable Egyptians are the”infiltrators” while the Saudi regime pimps out Arab lands & people to colonialists & zionists SHAME! #Egypt

Libyan State TV: “The zionists have launched an attack on a hospital in Tripoli.” #Libya #Gaddafi

@Avavidal Louis Theroux meets Zionists. Tonight #BBC 2 9pm. Apparently they are not ultra. But do they have wings? #Palestine

And it’s the above expressed views that inevitably lead to the conspiratorial Zionist money trail theories which are everywhere in the hard left – those sneaky Zionists and their money: