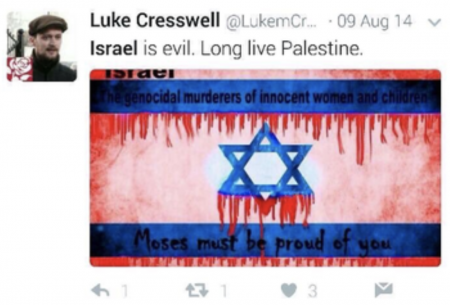 The people named in the headline are a selection of individuals running for, or touting for, various political offices under the auspices of the Labour Party.

They represent the depths Labour has sunk to under Jeremy Corbyn.

Let’s take Ali Milani. He apologised for his use of antisemitic discourse and the party attempted damage control. Were Milani a private citizen that would be fair enough but not only has he been selected to be a Prospective Parliamentary Candidate for the Labour Party but they’ve got him running in the Prime Minister’s own constituency.

Why would they run a candidate with this kind of baggage?

NEW FOOTAGE: This is the candidate who @JeremyCorbyn and @UKLabour are backing to beat @BorisJohnson in Uxbridge appearing on PressTV in 2015. In the footage Milani talks about ‘lobbyists’ and how ‘the other side is a lot better funded’

From the Jewish Chronicle:

Mr Milani has previously apologised for comments he made between 2011 and 2013 on social media.

As part of an exchange on Twitter in 2012, he wrote “Nah u won’t mate it will cost you a pound #jew”

He also wrote that “Israel has no right to exist” and “Israel is a land built on ethnic cleansing and colonialism. Oppression is something your people should know about”.

On another occasion, he wrote: “So lecturer asks the class today ‘nobody in this room would ever want to go to war right?’ My hand rises. ‘Who?’ Me: ‘Israel’.”

He also responded to a tweet by Piers Morgan, former editor of News of the World and the Daily Mirror, by calling him “a Zionist and corperate [sic] jackass”. Mr Morgan’s original tweet had not been on the subject of Israel or Jews.

Salma Yaqoob brings even more baggage with her, not least the fact that she spent rather a long time competing against the Labour Party as a member of George Galloway’s Respect party.

According to an account in Pickled Politics she referred to the 7/7 terrorist bombings as “reprisal attacks” during a debate with Douglas Murray and Andrew Pipes.

When three men were convicted for plotting terror attacks she was upset that no one was paying attention to their concerns about British foreign policy, writing:

The recent convictions of three young Muslim men on charges of conspiracy to cause explosions highlight the ongoing and real threat of terrorism.

In video messages explaining their motivations the culprits make a clear and explicit linkage between their intentions and the impact of Western foreign policy in Muslim lands.

Yet despite it coming from their own mouths that it is anger over foreign policy driving their hate, the Government continues to deny it as the primary factor.

Instead it blames a “dangerous Islamist ideology” for creating a hatred of the “Western way of life” as if such ideology is free standing and exists in some kind of vacuum.

In this discourse all Islamic political or social activists who are critical of the Government, from whatever political hue, get lumped together with the sinister description of “Islamists”.

The impression is created that all Muslims who are critical of the impact of foreign policy – and certainly any Muslim who recognises the rights of those in Palestine, Afghanistan and Iraq to resist the occupation of their countries – give succour to those who preach the language of violent extremism here.

Yaqoob has announced she will be in the race to become Labour’s candidate for West Midlands Mayor and has received the backing of John Lansman:

Welcome to @SalmaYaqoob who is a great addition to the male candidates to become West Midlands mayoral Labour candidate – and has my full personal support https://t.co/Eq1fhycAXF

Jo Bird is a Jewish Voice for Labour activist and a Labour councillor. Her antisemitic defence of Chris Williamson saw her suspended from the party but apparently wasn’t enough to convince the local party that she isn’t suitable as an MP. The Jewish Chronicle reported she is being lined up to replace Louise Ellman who has just (finally) quit the Labour Party writing that:

Under Jeremy Corbyn’s leadership, antisemitism has become mainstream in the Labour Party. Jewish members have been bullied, abused and driven out.

‘Antisemites have felt comfortable and vile conspiracy theories have been propagated. A party that permits anti-Jewish racism to flourish cannot be called anti-racist.

It was probably inevitable that the hardcore Corbynistas in Liverpool thought it made sense to get a Jew to run in Ellman’s place. The fact that Bird has been suspended probably enhances her credibility in their eyes. But likely not in the eyes of the rest of the country.

Luke Cresswell is the only one we haven’t previously featured on our blog. He has been short listed to be PPC for South Suffolk. He thinks Israel is an “evil” country and shared an Israeli flag dripping with blood with the words “The genocidal murderers of innocent women and children. Moses must be proud of you.”

This is Corbyn’s Labour Party. Voting for them would be your shame and the country’s should they be elected. These are the only people willing to run for election under a Labour banner because anyone who might wish to help the country has now been hounded out.

Vote anyone but Labour.