The latest blood libel from the Palestine Telegraph, the website that dares to speak troof to power, is the Haitian version:

US, February 1, 2010 (Pal Telegraph)- On January 15, Haaretz reported that: “The Israel Defense Forces’ aid mission to Haiti left Israel overnight (January 14) with equipment for setting up an emergency field hospital. Around 220 soldiers and officers (were) in the delegation, including 120 medical staff (to) operate the hospital in the Haitian capital, Port-au-Prince.”

According to Israel’s Ministry of Foreign Affairs, it includes “40 doctors, 25 nurses, paramedics, a pharmacy, a children’s ward, a radiology department, an intensive care unit, an internal department and a maternity ward (able to) treat approximately 500 patients each day,” including in two surgery rooms.

On January 20, Lebanon’s Al-Manar TV reported on the mission, citing a damning You Tube video posted by an American named T. West from a group called AfriSynergy Productions. “The video presents something to think about while exploiting the horrible tragedy that has befallen Haiti where Israeli occupation soldiers are engaged in organ trafficking.”

Israel faced these charges before. In November 2009, Alison Weir’s article in the Washington Report on Middle East Affairs headlined, “Israeli Organ Trafficking and Theft: From Moldova to Palestine.” She cited an August Donald Bostrom article in Sweden’s Aftonbladet suggesting that Israel illicitly removes body parts, including from Palestinians.

“….Israeli organ harvesting – sometimes with Israeli governmental funding and the participation of high Israeli officials, prominent Israeli physicians, and Israeli ministries – have been documented for many years. Among the victims have been Palestinians.”

On and on in this gutter it goes, finishing this way:

Its medical teams apparently are doing it in Haiti, exploiting fresh corpses and the living. The Manar TV cited You Tube said “there are people operating in Haiti who do not have a conscience and are members of the search and rescue teams, including the Israeli occupation forces,” far from home harvesting Haitian organs, and the pickings are plentiful.

Apparently, the publicity about providing humanitarian aid is cover for this illicit operation, another crime against humanity among Israel’s growing list, matched and exceeded by its Washington benefactor with generations more practice.

In the past, the sole reported patron of the Palestine Telegraph was Lauren Booth. Well, now she has highly suitable company. Can you guess who? 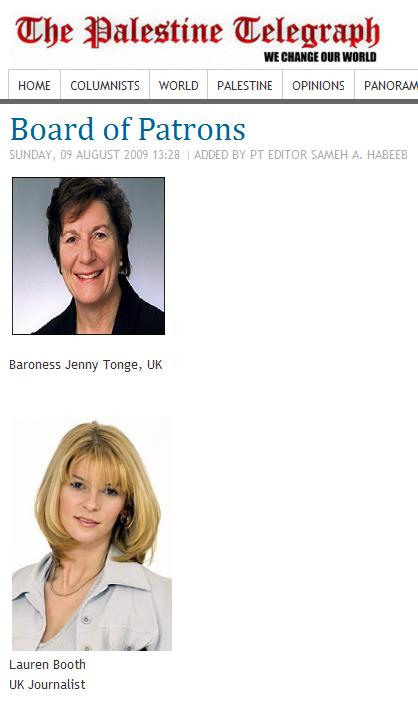 Sameh Habeeb also wears a hat for the pro-Hamas Palestinian Return Centre. Here he is organising a Gaza conference in its name in Westminster on March 1. 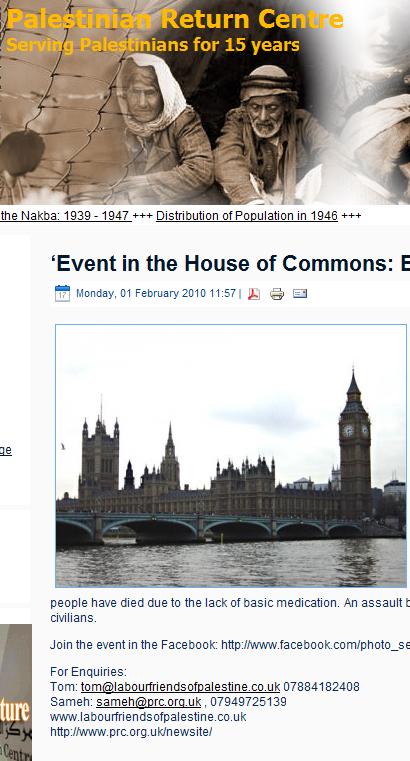 His partners for the event are the self-styled Labour Friends of Palestine. The MPs on the group’s committee are Richard Burden, Martin Linton and Phyllis Starkey.

These Labour politicians promote and happily associate with supporters of terrorism and publishers of the most vile racist hatred. They are a mark of shame for the Labour Party.

Not that they or the party care.