Activist Sameh Habeeb of the Palestine Telegraph has marked Holocaust Memorial Day by publishing a poisonous piece by the Holocaust denier Gilad Atzmon. It is titled “The Holocaust Backfires”.

The true interpretation of the Goldstone report is that Israelis are the Nazis of our time.
…
In fact, those world leaders around the world who bowed to Jewish pressure and made the Holocaust into an international memorial day must have been convinced that the Holocaust carries a universal message against oppression and racism. They were actually correct, if the holocaust has any universal and ethical meaning, stopping the ‘Jews only state’ and bringing its criminal political and military leaders to justice is the true interpretation of the lesson of the Holocaust.

Propaganda Minister Edelstein added “on the Holocaust memorial day of all days, which also marks the battle against global anti-Semitism, we must discuss this connection, because today the soldiers of the Israel Defense Forces are accused of harvesting organs and murdering children”. The Israelis better internalise that the truth of Israeli brutality is now common knowledge. IDF mass murder of children, elders and women is part of our collective memory. The Israeli institutional involvement in organ harvesting is also well documented and an accepted fact.
…
In the wake of the ‘International Holocaust Memorial Day’ I will say it loudly and openly. To oppose the Jewish state and Jewish nationalism is the true meaning of the memory of the Holocaust.

Sameh Habeeb has form. His website overflows with repulsive far right racism and bigotry, as reported here. You will find more poison from Atzmon here, here and here.

Habeeb is also the man who penned the “Frankstineine is Jew” legal threats to Nothing British About the BNP when they criticised the pro-Hamas Palestinian Return Centre – where Habeeb has worked – for inviting Hungarian neo-fascist Krisztina Morvai to a London conference.

Lauren Booth is still listed as the sole “patron” of the Palestine Telegraph. 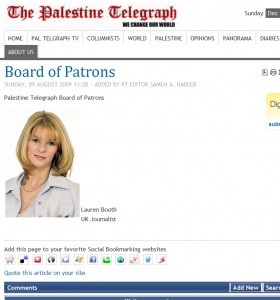 Why, what a surprise, the Leeds branch of the Palestine Solidarity Campaign. Habeeb is due to address a meeting tomorrow at 7:00 PM at the University of Leeds.

To get into the Holocaust mocking spirit, Leeds PSC has published another piece from MPACUK. It is titled “Milking The Holocaust For All It’s Worth”. It stands up for Holocaust denier Ahmadinejad and suggests everything is just peachy for Jews in Iran:

Despite Israel offering substantial bribes to emigrate to Israel and occupy even more Palestinian homes, the 30,000 plus Jews of Iran have decided stay put in Iran. I guess that gives he lie to the narrative that Ahmedinijad is an anti-Semite.

Anyway, how about a new slogan for Leeds PSC: “Racist scum! In our meetings!”

In London, the PSC will be welcome at this weekend’s “Progressive London” (tee hee) conference.