A row has brewed up at Leeds University, where an edition of Leeds Student newspaper has been pulled because of a comment in an interview with Sameh Habeeb, editor of the Palestine Telegraph website. Specifically, when asked whether mainstream news organisations have a hidden agenda, Habeeb replied:

They are certainly pro-Israeli. I think you have to ask yourself who controls the media.

This reply certainly hints at the well-known canard about Jewish or Zionist media control, which has been a staple of antisemitic conspiracy theorists for over a century. Given that Palestine Telegraph has form where such conspiracy theories are concerned, it is not surprising that some people suspected this is exactly what Habeeb was getting at. But even an understandable defensiveness does not explain their jaw-dropping response, which involved posting this cartoon:

This is just about as antisemitic a cartoon as you could find. The devil-monster appears to have the face of Ariel Sharon; note how the devil’s trident has been changed into a seven-branched Jewish menorah. The original of this cartoon was published in the Qatari newspaper al-Watan on 19 July 2002. In the original, pictured below, the devil was marked with a Star of David and there was no speech bubble:

Palestine Telegraph has developed a particular animus for Harry’s Place blog, and in their version of the cartoon the Star of David has been replaced by the label “Harry’s Place”; but the Jewish nature of the creature – as represented by the menorah – is still unmistakable. Even the ‘Jewish horns’ make an appearance. The creature walks on human skulls, depicting the bestial cruelty of Jews/Zionists.

The caption seems to have been put there by Palestine Telegraph themselves, and relates to two claims that Eyre often makes: (a) that Israel has used depleted uranium in Gaza and (b) that there are huge oil and gas fields off Gaza which Israel wants to get its hands on. Here is a report of him making these claims at a meeting in London in January.

Far from disputing the interpretation which Leeds Student Union put on Habeeb’s words, Palestine Telegraph seems intent on confirming them. The cartoon is used to illustrate an article by Peter Eyre, one of their regular columnists, in which he argues that the media is indeed controlled by pro-Israel people, which he tries to prove by claiming (falsely) that Rupert Murdoch is Jewish:

The bulk of the media certainly is controlled and does carry an allegiance to Israel. It has been pointed out historically for many many years that the media is now a monopoly and one leader figure is of course none other than Rupert Murdoch.

I note that many times there appears to be a cover up as to if Rupert is of a Jewish family. His father married an extremely wealthy Jewish girl which basically launched Rupert on his very successful career. No matter what Harry’s place tries to say according to the law of the Talmud that certainly makes him Jewish.

Note how Eyre presents the ‘fact’ that Murdoch is Jewish as prima facie evidence that the media he owns is pro-Israel. According to Eyre’s Blogger profile, he also believes that:

world politics are controlled by Wall Street and London Bankers with Christian and Jewish Zionist at its heart.

The al-Watan cartoon was included in Joel Kotek’s Cartoons and Extremism, and featured in an exhibition of cartoons from the book that was curated by CST and held at the Political Cartoon Gallery. As Kotek explains in the book, the depiction of Jews as devil-like creatures has a place in the history of antisemitic iconography. An example can been seen in this Viennese cartoon from c. 1910 (also from Cartoons and Extremism), titled “The biggest usurer in the world”, which shows a Jew with multiple faces and a dragon-like body with wings and a tail, sitting atop a globe:

Palestine Telegraph is a website which has promoted the blood libel about Israel stealing organs in Haiti; claimed that Israel was behind 9/11; and denied the Holocaust. Most recently, it published a video by former Klan leader David Duke. This final act proved too much even for Baroness Tonge, who stepped down as one of their patrons as a result. The current patrons of Palestine Telegraph are listed as George Galloway, Lauren Booth and Luisa Morgantini. Galloway in particular, for all his opposition to Israel, has always steered clear of this sort of overt antisemitism. Is he really going to remain the patron of a website that publishes this kind of material?

Gene adds: The PT cartoon originally featured the Star of David, but it’s been changed to the label “Harry’s Place”– which I suppose the editors believe eliminates any possible suggestion of antisemitism. 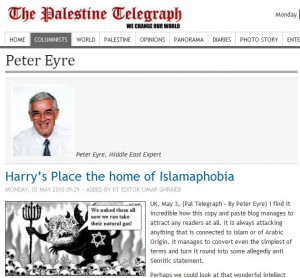 Who else wants to hear from far right hate publisher Sameh Habeeb? The Reading group of the self-styled Palestine Solidarity Campaign. This Sunday Habeeb will speak at a fundraiser for the next convoy for Hamas. (Click the image to enlarge.)