Viva Palestina, George Galloway’s Hamas support operation, has confirmed that it will join Turkish charity IHH this May in an aid convoy to Gaza by sea from Turkey.

In January of this year, IHH was an integral partner with Viva Palestina on the convoy to Gaza, where 500 people in over 200 vehicles successfully broke the siege on Gaza and delivered essential humanitarian aid. Viva Palestina are therefore very proud to announce their involvement with IHH again on this flotilla, and in addition to sending medical and building supplies, a Viva Palestina Coalition team will be on board this historic journey.

If you would like to help Hamas, you can donate to Viva Palestina via its bankers, the “ethical” people at Co-operative Bank.

IHH was indeed a leading contributor and organiser of last winter’s convoy. On the road, the convoy was an open celebration of Hamas and the Muslim Brotherhood. When it reached Gaza, it handed over its goods to the terrorist group, as confirmed by IHH (pdf):

Ismaiil haniyeh, the prime minister of Hamas-ruled government in the Gaza Strip, received at his office a group of representatives from Freedom to Palestine Convoy, which managed to enter Gaza after a three-week travelling and waiting. Bülent Yıldırım, the president of the IHH Humanitarian Relief Foundation, members of the IHH executive board and Mazlumder Chairperson Ahmet Faruk Ünsal were present during the visit.
…
Hamas leader thanked the IHH for its help. “The IHH has particularly delivered substantial amount of aid to the people of Gaza. IHH President Bülent Yıldırım offered help and stood beside our side during the war. This is an example of Islamic fraternity, an indication that we are all parts of the same umma. Muslims are like walls reinforcing each other.
…
The keys to the 145 vehicles brought along the convoy were handed over to Gaza authorities in a ceremony held at 11:00 a.m. IHH president, Turkish MPs Murat Mercan, Hüsnü Tuna, Mehmet Nil Hıdır, Seracettin Karayağız, Cemal Yılmaz Demir, deputy chairperson of Saadet Party Temel Karamollaoğlu, Ahmad al-Kurd, Hamas minister of social affairs, and British MP George Galloway attended the ceremony.

Hamas is grateful for the continuing support. Earlier this month IHH held a convoy fundraiser in Ankara, Turkey. It was addressed (pdf) by Hamas leader Khaled Meshaal via video link:

A screening of a video recording of Khaled Mashal’s address to the guests of the event followed Yildirim’s talk. Mashal, the leader of Hamas, said “Turkey is doing what is expected of her by sending us humanitarian aid by the sea. We are expecting the same from all Muslim countries.”

Some of the UK organisers are very enthusiastic. Here is the eliminationist “from the river to the sea” message which greets you on the Facebook wall of one group, “Gaza Boat Convoy UK”: 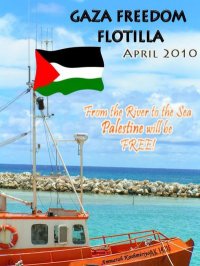 In the photos section, there are some heartwarming images:

There’s an inspirational video too:

One of the fundraisers will be held on May 9 in Bradford at the Mayfield Centre (pdf). It is a public sector venue.

It is illegal to fund Hamas from the UK, but Hamasniks need not worry, for that law is never enforced.