I’ve been mulling over the illustration that accompanies the Palestine Telegraph’s latest attack on Harry’s Place and me in particular (“that wonderful intellect called Gene”). 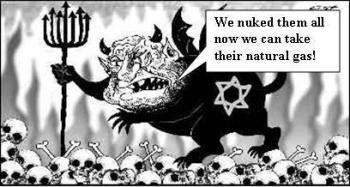 Aside from the fact that I look nothing like that (for one thing, my wings are bigger), it appears the drawing comes from another source, while the speech balloon was pasted on. (Does it refer to Israel’s supposed plan to nuke Iran?)

It looks like some kind of Jewish devil, so I went to Google Image and typed “jewish devil” in the search box. Guess which drawing appeared first?: 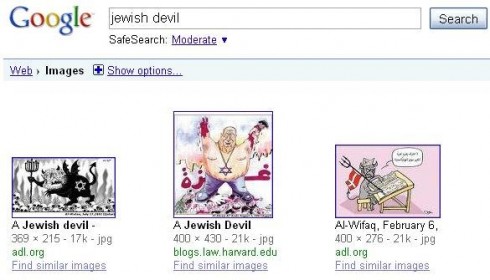 It’s from a display of antisemitic cartoons in the Arab media at the Anti-Defamation League website. According to the ADL, it appeared in the Qatari newspaper Al-Watan in 2002 and depicts a “Jewish devil – possibly Ariel Sharon – walk[ing] over the skulls of its victims.”

After charging that Harry’s Place “manages to convert even the simplest of terms and turn it round into some allegedly anti Semitic statement,” the PT goes on to repeat the canard that there has been a “cover up” of the alleged fact (of which I can find no evidence) that media mogul Rupert Murdoch’s mother was “an extremely wealthy Jewish girl.” Of course I don’t need to tell you what kind of people are obsessed with trying to prove Murdoch’s supposed “Jewish heritage.”

The author of this PT piece is none other than Peter Eyre, who posted on his blog earlier this year about his participation in a “Palestine memorial week” meeting in London:

I listened to a lady in the audience who asked if we were aware of the fact that many political figures in senior position were Jewish and could this create a problem. Jeremy Corbyn an MP with the current Labour Party quickly dispelled the topic and suggested we did not go down this road. This was also supported by a Palestinian member of the panel who supported Corbyn’s views…….I however took the microphone and advised the audience that the lady did have a valid point. I said “Maybe we are all not aware that Governments and Political figures are given huge sums of money in their respective election campaigns by the pro Israeli lobbyists”

And yes– last time I looked, George Galloway and Lauren Booth were still listed on the Palestine Telegraph’s Board of Patrons.