The late Ralph Miliband was a Marxist. Michael Crick, in a pretty fair assessment of the man’s politics, described him as follows:

Ralph Miliband was not a Marxist in the Marxist-Leninist sense. He was no fan of the Soviet dictatorships and one-party states. Nor did he believe in violent revolution to overthrow capitalism.

In crude terms he was neither a Stalinist nor a Trot. Yet he was deeply sceptical about whether Parliament would ever do much to emancipate the working class.

Miliband was convinced instead that progress would depend on activity outside Parliament, through trade unions and other protest groups liberating themselves through radical activity.

There is, in my view, absolutely nothing wrong with criticising a philosopher’s worldview. As Dan Hodges points out it is also entirely fair to do so, when his son – who may be the next Prime Minister – invokes him as his inspiration. But Geoffrey Levy’s article in The Daily Mail – as Sarah AB argues – was far from a fair assessment of the man’s politics and career. I therefore sympathise with those who found the Mail’s article to be obnoxious – and I say this as somebody who believes that Marxists are wrong about almost everything, often dangerously so.

The Daily Mail has also been accused, in various quarters, of antisemitism in its attack on Ralph Miliband. Daniel Trilling in The New Statesman puts it clearly:

To me – regardless of the author being one “Geoffrey Levy” – the piece drew its venom from a well-worn anti-Semitic stereotype: that of the rootless Jewish subversive who hates his or her adoptive country and even works to undermine it.

Others make similar charges in The Jewish Chronicle – now online: 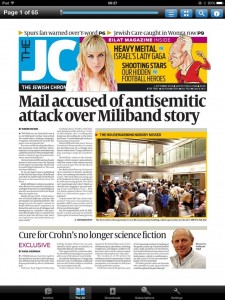 I wouldn’t completely discount the argument that Trilling and others make, although I think it is relatively weak, at least in relation to the Geoffrey Levy article itself. It is stronger in relation to the Daily Mail’s editorial, defending their story, where they said:

We do not maintain, like the jealous God of Deuteronomy, that the iniquity of the fathers should be visited on the sons. But when a son with prime ministerial ambitions swallows his father’s teachings, as the younger Miliband appears to have done, the case is different.

A common theologically-inspired jibe against Jews is that Judaism is a religion of vengance, while Jesus brought to humanity a “new covenant” premised on love and forgiveness, which overwrites the generational curse of Deuteronomy. Jews, by contrast, were often portrayed as those who invoked a generational curse upon themselves, for the crime of deicide. That’s an unfair characterisation of the difference between the two religions. Deuteronomy is equivocal about generational curses in any case.

On the subject of generation curses: it is notable that the response to the Daily Mail’s articles is to remind people that the grandfather of the present Lord Rothermere wrote articles supporting Oswald Mosley’s blackshirts in both the Daily Mail and Daily Mirror. The Daily Mail’s present obnoxiousness is presented as a continuation of that tradition: sins passing down along the family line, in much the same manner contemplated by the Mail’s own editorial line on the Miliband family.

But that’s not my point. The invocation of Deuteronomy was entirely unnecessary here. It struck me as a dog whistle.

Not everybody will accept that. Some will see the reference as merely an innocent turn of phrase. They’re right: in the same way that a few years ago, many people didn’t regard gollywogs as anything other than a beloved and slightly archaic toy, and were genuinely astounded that they might have anything to do with a cultural history of racism against black people.

What I did find remarkable, however, were the quarters from which cries of “antisemitism” were raised.

The New Statesman, which published Daniel Trilling’s piece, is hardly at the forefront of opposition to antisemitism: when it comes from those on the Left and from Islamist groups in particular. Mehdi Hasan, who was pretty much the only New Statesman writer to take Holocaust denial in the Muslim community seriously, then went on to write a very sympathetic – even triumphalist – piece on the legal victory of the blood libel sheikh, Raed Salah. After a series of additions to his article and backtracking, he eventually admitted:

As for the “blood libel” row, let me say that it is one of the most disgusting, heinous and unforgivable of anti-Semitic smears in existence – which is probably why Salah has been so keen to deny having used it, though it does, I have to say, seem as if he did use it.

Daniel Trilling himself spoke on a Unite Against Fascism platform alongside the extremist hate preacher, Shakeel Begg, who has said:

“You want to make jihad? Very good… Take some money and go to Palestine and fight, fight the terrorists, fight the Zionists.”

Frankly, I think that’s a slightly more dangerous expression of Jew-hatred than the Daily Mail suggesting that Ralph Miliband didn’t like Britain very much.

Among those quoted in The JC article are Rabbi Danny Rich and Lord Glasman. Danny Rich, “breathing deeply and with a sigh or two” encouraged Jews to vote for Ken Livingstone, whose antisemitic statements went well beyond those expressed by the Daily Mail. Danny Rich has also participated in various London Citizens campaigns, and is a supporter of Jewish involvement in that organisation. London Citizens is the brainchild of Lord Glasman, and has been criticised correctly for its close connection with the Jamaat-e-Islami aligned institutions: the East London Mosque, the London Muslim Centre and the Islamic Forum Europe. One of its trustees and its vice chair regards Hamas as “heroes”.

So, sure. It is great that some people on the Left have detected a whiff of ‘traditional attitudes about Jews’ eminating from a nasty Right-wing mag. Well done them.

But when those accusations are made so freely and quickly against the foes of the Left, and so guardedly and slowly against Islamists and those on ‘our own side’, I get a nasty feeling that accusations of antisemitism are being rationed for what is essentially a strategic purpose. 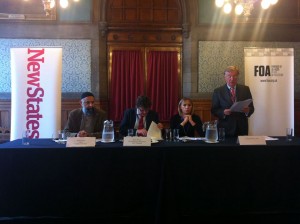 Ismail Patel, of Friends of Al Aqsa, is a fan of the late Holocaust denier, Roger Garaudy. He famously recommended his books in lecture (as documented by Engage and shown by citations of Garaudy in a Friends of al Aqsa report).

Speaking at the same meeting was Peter Oborne, the Chief Political Commentator, The Daily Telegraph. Oborne has made a splash over the last few years, as an opponent of “the pro-Israel lobby”. If portraying Ralph Miliband as a rootless cosmopolitan has an element of antisemitism to it, similar concerns could be raised about those who fulminate about Jewish conspiracies to control British politics.

But the New Statesman is quite happy to host these men and promote their views.

You don’t have to go back to the 1930s to find an example of a brush with antisemitism at the New Statesman.  I am sure many readers will remember the Kosher Conspiracy furore.