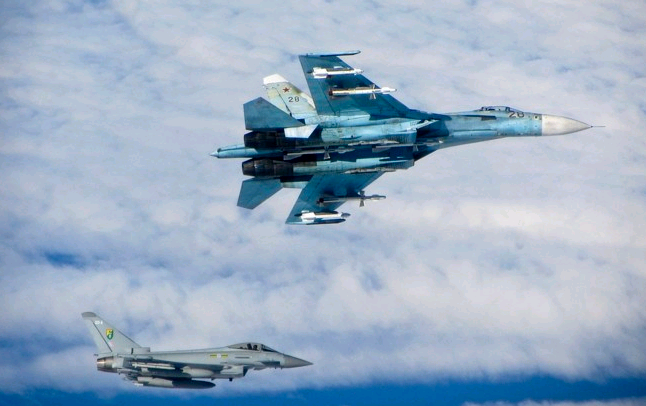 From a government press release:

This weekend’s activity means that RAF jets operating from Ämari Air Base in Estonia have made eight intercepts of Russian aircraft since taking over the Baltic Air Policing mission on 3 May 2019.

Typhoon jets on QRA alert launched during the evening of Friday 14 June to intercept a Russian SU-30 fighter aircraft that was flying to the north of Estonia.

A Typhoon pilot from XI(Fighter) Squadron on duty when the scramble was called he said:

We were scrambled to intercept a contact close to Estonian airspace in the early evening, between two periods of poor weather. Shortly after getting airborne we came alongside a SU-30 Flanker fighter aircraft. We escorted the fighter over the Baltic sea, around Estonia and passing over another Russian military transport aircraft in the process.

RAF crews made a second scramble on Saturday 15 June to intercept a Russian SU-30 Flanker fighter and an Ilyushin IL-76 Candid transport aircraft transiting north from Kaliningrad towards Estonian and Finnish airspace.

A Typhoon pilot from XI(Fighter) Squadron on completion of the intercept said:

We scrambled to intercept two contacts that were approaching Estonian airspace from the south. We escorted the two aircraft for 15 minutes as they transited back towards mainland Russia. We then handed over responsibility to two Finnish QRA aircraft, which had also been scrambled as the Russian aircraft operated on the airspace boundary between Estonia and Finland.

During both intercepts, the aircraft were flown at a safe distance and operated in a professional manner throughout.

The Royal Air Force is deployed on Operation AZOTIZE in Estonia in support of NATO Baltic Air Policing.

The UK operates in support of NATO to reassure our allies and is a further demonstration of the UK’s commitment to the security of the region.

Elsewhere in the region over 800 personnel from the British Army lead the NATO enhanced Forward Presence battlegroup in Estonia and Poland, while nearly 2,000 UK Armed Forces personnel are contributing to the Joint Expeditionary Force’s (JEF) maritime Baltic Protector deployment this summer.