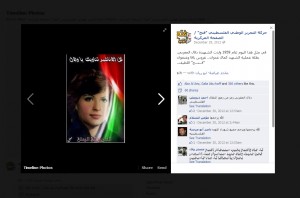 David Pollock is the Kaufman Fellow at The Washington Institute (This is a crosspost from Fathom.)

CAPTION. Fatah Facebook page 2012. Image of Dalal Mughrabi, a female terrorist who participated in the deadliest attack in Israel’s history – the killing of 37 civilians in the 1978 Coastal Road Massacre. The image was posted with the declaration: ‘On this day in 1959 Martyr (Shahida) Dalal Mughrabi was born, hero of the ‘Martyr Kamal Adwan’ mission, bride of Jaffa and the gentle energizing force of Fatah.

Even as Israeli-Palestinian peace talks begin again, official Palestinian Authority (PA) media are still broadcasting girls singing about Jews as ‘the sons of apes and pigs,’ and still paying effusive tribute to Palestinian terrorists convicted for murdering Israeli civilians. To get these negotiations started, Israel agreed to release over one hundred such prisoners; but the Palestinian government continues to glorify them as heroes, offering them as role models for the next generation. If this kind of incitement keeps up, how can Israel reasonably take risks for peace – and how could any peace agreement endure?

The start of peace talks makes it all the more urgent to examine incitement and related inflammatory rhetoric – what would be referred to in the United States or Britain as hate speech – in the official public record of the PA. In recent years that record reveals relatively few high-level expressions of religious hatred, but numerous official messages that nonetheless run counter to the goal of peace. Addressing the problem of incitement now, at the start of this current peace effort, will help promote an atmosphere of good will and improve the chances of success in the negotiations.

On the whole, the PA messaging trend over the past year has been negative, and the tone has been reflected by the rhetoric of Palestinian President Mahmoud Abbas himself. A comparison of the UN General Assembly speeches by Abbas in September 2011 and September 2012 shows a much more accusatory and less conciliatory tone toward Israel in 2012, with just a passing mention of peace.

When examining day to day cases, the most common form of recent incitement, with nearly one hundred documented cases between March 2011 and December 2012 according Palestine Media Watch, is that of glorifying terrorists, often manifested in statements by PA officials. The list of honourees includes occasional mention of earlier assassinated PLO leaders like Abu Iyad (Salah Khalaf) and Abu Jihad (Khalil al-Wazir). Most frequently mentioned, however, are individuals convicted of terrorism since the PLO officially renounced it at the start of the Oslo process in September 1993, and including those recently released from or currently serving time in Israeli jails.

In a particularly striking case, at the end of 2012, the Fatah Facebook page posted an image of Dalal Mughrabi, a female terrorist who participated in the deadliest attack in Israel’s history – the of killing 37 civilians in the 1978 Coastal Road Massacre. The image was posted with the declaration: ‘On this day in 1959 Martyr (Shahida) Dalal Mughrabi was born, hero of the ‘Martyr Kamal Adwan’ mission, bride of Jaffa and the gentle energizing force of Fatah.’

Another theme of recent official Palestinian incitement is the demonisation of Israelis and Jews, often as animals. For example, on 9 January 2012 PA television broadcast a speech by a Palestinian imam, in the presence of the PA Minister of Religious Affairs, referring to the Jews as ‘apes and pigs’ and repeating the gharqad hadith, a traditional Muslim text about Muslims killing Jews hiding behind trees and rocks, because ‘Judgment Day will not come before you fight the Jews.’

Denying Israel’s existence or rejecting the possibility of coexistence with it is another form of incitement. This may be either explicit or implicit. Fatah’s own websites in Arabic continue to feature the original PLO and Fatah covenants and other founding documents, all of which explicitly rule out recognition or peace with Israel and assert a claim to all of historic Palestine.

Direct statements by PA officials often deny Israel’s historical legitimacy and accuse it of inherent injustice, even if they do not deny its existence or explicitly threaten to destroy it. For example, PA Deputy Minister of Information Al-Mutawakkil Taha told official PA daily newspaper Al Hayat Al Jadida in early 2012 that, ‘Israel has gone beyond all forms of oppression practiced by fascism throughout history, and that it does more than racist discrimination and ethnic cleansing.’

But what are the motives behind such incidents? Many Palestinian officials, academic specialists, and other experts argue that this is simply an expression of anger at Israeli occupation, and the absence of any sign of it ending. Some Israeli analysts see this situation in precisely the opposite terms. Incitement, they maintain, is actually a form of political ‘insurance,’ keeping the fires of popular hostility and irredentist grievances smouldering, and therefore keeping open the option of reverting to ‘armed struggle’ even after signing an accord with Israel, as Arafat did in the Oslo era. A final, even more discouraging possibility is that senior PA officials actually believe some of the anti-Israeli and even antisemitic screeds that their media propagate.

Some argue that the trading of accusations over incitement is a secondary issues and distraction from the real substantive issues to be negotiated between the sides; the problem that will go away on its own once a peace accord is signed. However, the lesson from other conflicts is that waiting for a conflict to end before addressing the incitement which fuels it can be a prescription for disaster.

The international tribunals held following the end of armed conflict in the former Yugoslavia and in Rwanda set new precedents for the prosecution of incitement, at least of incitement to genocide. Perpetrators of the most serious forms of incitement were judged as international criminals deserving severe punishment. Sadly, these measures were taken only after the most deadly and destructive phase of conflict was over. Better late than never, some might say, but too late to avert the damage wrought by incitement while the conflict still raged. Furthermore, incitement that does not reach the level of instigating mass murder has not been prosecuted in international tribunals – leaving a vast playing field free for lesser yet still noxious forms.

It is difficult to make direct links from incitement of the kinds seen in Palestinian media to violent episodes. However, strong circumstantial evidence suggests a possible connection between particular messages and specific terrorist or other violent episodes. The Itamar massacre of March 2011 for example, in which five members of the Fogel family were murdered in their beds, followed a month of commemorations on PA media of other Palestinian terrorists – beginning with a DFLP (Democratic Front for the Liberation of Palestine) militant who murdered two Israelis at the same West Bank settlement in 2002. A 2011 Pew poll shows that 68 per cent of Palestinians in the West Bank and Gaza say suicide bombing is justified, at least ‘sometimes’, compared with much lower percentages in other predominantly Muslim societies.

Finding ways to ensure the PA stop, or at least reduce, official incitement against Israel would have other positive effects, aside from potentially reducing the motivation for future would be terrorists. It would indicate that the PA was willing and able to take the kind of unpopular steps required to keep an agreement with Israel. Most important in the long run, it might gradually accustom or encourage more Palestinians to accept permanent peace with Israel, making a compromise agreement less risky and more durable.

So, tackling incitement matters; but how should international third parties address it? Beginning in the Bush Administration, the US paid particular attention to the issue of incitement in Palestinian and Israeli textbooks. In part, as one policymaker from that period privately explained, the decision to focus on textbooks reflected a feeling that teaching prejudice and training a new generation for endless conflict was tantamount to ‘child abuse.’ In tandem with the pressure on Arafat to empower Abbas as prime minister in 2003, and in particular following Arafat’s passing in late 2004, this counter-incitement initiative actually did produce results.

Similarly during the Obama Administration, public reproaches from Secretary of State Hillary Clinton and other relatively high-ranking officials in early 2010, along with their push for a halt in Israeli settlement-building to jump-start peace negotiations, helped produce a decline in PA anti-Israel media messages. This time, however, the improvement proved only temporary. Once the short-lived peace talks and Israeli settlement moratorium ended in September 2010, PA incitement picked up again, without eliciting a prompt high-level US or international protest. The lesson appears to be that unlike with textbooks, which are less susceptible to change, an improvement in media can easily retrench without persistent pressure. A counter-incitement effort should be serious, sustained, and comprehensive if it is to have any success at all.

It should also be focussed on the worst cases: any support on either side for violence or violent offenders coming from government officials or institutions with governmental authority or funding. The less extreme forms of incitement such as historical denials or distortions should be relegated to the background for now, however important those might be in the longer term. Neither side should be allowed to use allegations against the other to deflect or excuse its own failings. Leaders must set the right tone, and stick to it without exception or equivocation.

It is futile to debate whether Israeli settlements or Palestinian hate speech are more or less to blame for the conflict’s persistence. The major lesson of past successes, failures, and false starts are that incitement is a serious problem, but also a fixable one. It is at least as much an obstacle to peace as any other more tangible issue, so steps to end it should be integrated into any attempt to address the Israeli-Palestinian conflict. All interested parties – Israelis, Palestinians, Americans, Europeans, and others – should now pay at least as much attention to hate speech as to housing starts.

Fathom marries the authority of the old-school journal with the accessibility provided by modern technology: Fathom is available online at fathomjournal.org and as a free app for the iPad and iPhone and, for the first time, Android.

Dr. David Pollock is the Kaufman Fellow at The Washington Institute focusing on the political dynamics of Middle East countries. He has served as a senior advisor on the Middle East at the US Department of State, as a visiting lecturer at Harvard University and as assistant professor at George Washington University.