Today the London Muslim Centre of the East London Mosque hosted another radical event: “Ramadan – The Month Of Conquest”. It was organised by a group called Ummah Voice. 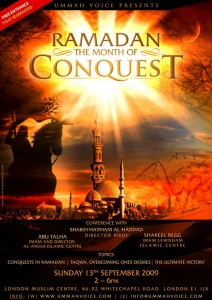 One of the speakers, Haitham al Haddad, an Islamist of Palestinian origin who grew up in Saudi Arabia and studied sharia at Omdurman University in Khartoum, Sudan, will be familiar to readers of this blog.

Here he is in the midst of a speech hailing the “victory” of Hamas in the Gaza war, saying that he wants the state of Israel to be annihilated. He also offers some utterly bizarre ideas about Jews uncovering Jesuit conspiracies.

My proposed solution for the Israelis is to leave Palestine and to go back to their own countries to live in peace. If they want to live in peace, in real peace, they should leave Palestine and leave it for the Palestinians and those Jews who would like to live in Palestine, but under the Palestinian government, not under the Israeli government.
…
Many Jews believe that no, they should not live in a separate state in Palestine, and they should not establish the Temple until the antichrist come. So the antichrist should come back first, and then the Jews can have their own state, not the other way around. Many Jews believe that they were fooled by the Jesuits, many of the Jesuits, that they should establish the Temple first, in order for the antichrist to come back. Have you noticed the difference, OK, this is a major difference.
…
One of the strategic mistakes that Israel fell into is that many Israelis now, many Jews, started to think about this more and they are questioning themselves. Why do we take part in these wars? On behalf of who? Is it on behalf of the Jewish ideology? No, the Jewish ideology does not say this. Some of them question that. Are we, they are saying, are we taking part in this war on behalf of the Jesuits? On behalf of some of the neocons? If so, why do we need to do so, so we have to think about it. So more Jews are starting to think about this. This is another big mistake that Israel, in my opinion, made.

Another speaker is Shakeel Begg, the imam of the Lewisham and Kent Islamic Centre and the Islamic chaplain at Goldsmiths. He was born in Kenya and grew up in London. He is a graduate of the Islamic University of Medina in Saudi Arabia.

According to a report in The Times, he too supports terrorist attacks on Israel:

Shakeel Begg, another radical cleric, recently urged students at Kingston University, southwest London, to wage jihad in Palestine. In a tape-recorded speech obtained by The Sunday Times, Begg, who is a Muslim chaplain at Goldsmiths College, part of London University, said: “You want to make jihad? Very good… Take some money and go to Palestine and fight, fight the terrorists, fight the Zionists.

Earlier this year, at another seminar at the London Muslim Centre titled “Heroes of Islam”, Begg chose to celebrate Aafia Siddiqi. She has been accused of attempting to murder American soldiers and officials in Afghanistan. Here he is championing her again (at 8:35 in) at a rally staged by Cage Prisoners, Moazzam Begg’s outfit.

Shakeel Begg also works with the Muslim Prisoner Support Group, a charity which has had two terrorists as trustees.

The police are one of his bugbears. He tells Muslims to see the police as the devil, at war with Islam. Even giving a speech to police officers is a betrayal of Allah.

It is with much sadness that I read Tawfique Chowdhury’s speech to the anti-terrorism officers in Wales, which he brazenly posted on an Islamic blog. I was deeply shocked and appalled by his enthusiasm for collaboration with a body that has failed its own war against Islam and the Muslims at home and abroad. It is deplorable for a graduate from the prestigious Islamic University of the Prophet’s city – the first Islamic State – where the subject of ‘Aqida is emphasised the most, to declare himself an ally of the West against Islam, not even by choice, but naturally. It is ridiculously outrageous for a Muslim speaker to lure the anti-terrorism officers into using him and other religious leaders against the Muslim community. This is not to say that we should not work to prevent unlawful violence. In fact, many have been at the forefront of this work, without signing a deal with the devil, or joining any sort of alliance, be it natural or otherwise, with the brutal, cunning and oppressive anti-terrorism workforce.

In light of this, I urge Tawfique Chowdhury to publicly and unequivocally retract his irresponsible and reckless speech, in order to save himself and his institute from disrepute. The failure in doing so will only reaffirm the public sentiment in the UK that he has clearly taken sides with the enemies of Islam and the Muslims. I would also like to take this opportunity to remind the scholars, preachers and Imams that their silence is consent. Tawfique Chowdhury is not the first to fall into disrepute and controversy, and he certainly would not be the last, unless and until they fulfil, and not betray their covenant with Allah, like those of whom Allah makes mention in His Book: “(And remember) when Allah took a covenant from those who were given the Scripture to make it known and clear to mankind, and not to hide it, but they threw it away behind their backs, and purchased with it some miserable gain! And indeed worst is that which they bought.”

In July this kind of divisive and spiteful message was pushed at a seminar at the Lewisham centre titled Al Munafiqeen [“the hypocrites”] – The Enemies Within. Begg was one of the speakers. The event was advertised on Islamic websites, including the site of the Muslim Council of Britain, this way:

A seminar discussion pressing issues facing the Muslim community such as the sinful acts of spying, informing and betraying other Muslims; the evil call to abandon ones faith through Secularism; and the traits of the hypocrites. This seminar is part of ‘The Muslim Nation – Rights and Obligations’ seminar tour.

Amazingly, no, scratch that, this is the UK we’re talking about, entirely predictably Begg is a member (pdf) of the Lewisham Community Police Consultative Group. He has also spoken at an Amnesty International event.

The third speaker at today’s event is Abu Talha of the Al Ansar Islamic Education Centre in Goodmayes, Essex. He is another graduate of the Islamic University of Medina. Here he is pouring scorn on the enemy – Muslims he calls “modernists”, such as Shiraz Maher; the Quilliam Foundation leaders, who are actually “not Muslims”; Usama Hasan; and even Tariq Ramadan. (Part 1 of the video is here and part 3 here.)

This is from the East London Mosque’s “About us” page:

Our Imams and community workers encourage constructive engagement in society and a rejection of extremism in all its forms. We unequivocally reject all terrorism.

Update: from an opinion piece by Ed Husain:

Nor are our politicians standing up to the threat. When Quilliam’s researchers revealed that Abu Qatada, “al-Qaeda’s ambassador to Europe”, was smuggling propaganda letters from inside a British prison, the then justice minister turned up on the BBC to dismiss our findings and say such work was “unhelpful”. Boris Johnson recently called for greater understanding and tolerance of Islam at the East London Mosque – the same place where I and many others were introduced to radical Islamist ideology, and whose Saudi-trained imam is a signatory to a document that many say calls for attacks on the Royal Navy.

Yes, Shah Jahan Abdul Qayum, the imam and khatib of the East London Mosque, is listed as a signatory of the pro-Hamas Istanbul declaration (pdf), the work of this assembly of jihadi preachers and practitioners in Turkey in February 2009.