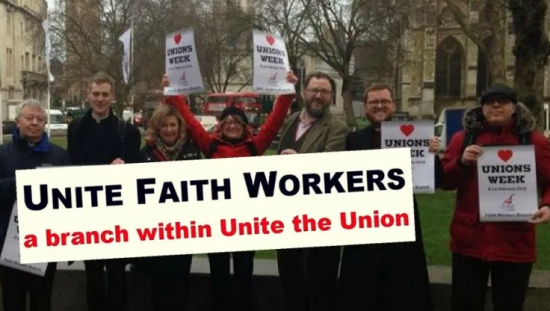 This is a guest post by Pandit Satish Sharma, Hindu Theologian and General Secretary of the National Council of Hindu Temples, he tweets @DharmaRising

The Jewish Chronicle recently reported how, Anna Turley, former Labour MP and vocal critic of the Party’s record on antisemitism, won a libel battle against Len McCluskey’s Unite Union, including her claim that Unite had misused her private information.  In addition to being awarded £75,000, it later emerged that the legal costs payable by Unite could amount to more than £1.5 million.

This is hardly the first time that Len McCluskey’s Unite has been the subject of successful legal action for harassment and discrimination against whistleblowers of racism and bullying within the Union.  But rather than being chastened by such wrongdoings, legal experts have pointed to an “endemic culture of aggressive institutional victimisation and cover-up” by officials in the Unite London and Eastern Region, as elsewhere.

Turley again alleged that the stain of antisemitism within Unite reaches up to McCluskey himself.  Notably, the Unite General Secretary’s criticism of the Chief Rabbi’s intervention during the recent general election, should be seen in the context of last year’s resignation of several rabbis from the Unite Faith Workers’ Branch, its clergy division, in protest at McCluskey’s prior offensive comments about Jewish “truculent hostility” towards Labour.

The same ugliness within the Unite Faith Workers’ Branch has again come into focus following the disturbing report in the Church of England Newspaper by Andrew Carey, son of the former Archbishop, concerning the victimisation of Muhammad Al-Hussaini, an imam and theologian who has been an outspoken commentator on Islamist religious extremism and abuse within the Muslim and church leadership.

Al-Hussaini, who is himself an Executive Officer of the Unite Faith Workers as well as a Core Participant Witness in the government’s child abuse inquiry, had published two newspaper articles on institutional bullying and victimisation of whistleblowers of abuse by religious leaders, which led in turn to a torrent of harassment against him. The documentary evidence shows also how, following criticism of the articles by Church of England authorities and political pressure, the Anglican Treasurer of Unite Faith Workers’ Branch, Peter Hobson, published a press statement purporting to be issued in the name of the Faith Workers’ Executive which distanced itself from Al-Hussaini – but did so without the consent of the Chair, Secretary and other Executive Committee Members.

As a result of the ensuing row, the Chair, Stephen Trott, a senior and respected clergyman involved with the Anglo-Israel Association, resigned at what he called the “vendetta” against Al-Hussaini, and due also to the unresolved issues of Unite antisemitism, as well as the prior resignation of yet another Faith Workers Committee Officer, Dean Henley, due to his allegations of experiencing homophobic bullying by the Union.  The Secretary of the Faith Workers, David Isiorho, further reported he had been rudely put under pressure by Unite Regional officials for defending Al-Hussaini, and raising concerns about this institutional bullying.

Notable in the “vendetta” was the role of Steven Saxby, the Corbynista “red rev” Labour candidate for Westminster and City, and himself one-time head of Unite Faith Workers, who other Executive Committee Officers alleged was acting at the “agitation” of William Campbell-Taylor, a controversial fellow Labour Party vicar also in the City of London.  Saxby was since suspended from parliamentary candidacy by Labour due to allegations of sexual harassment, which stand alongside prior alleged “conduct unbecoming of a clergyman”.  Saxby has, of course, been the subject of prior articles on Harry’s Place, his advancement in Labour coming significantly on the back of his leadership in the Unite Faith Workers’ Branch.

Since this scandal, with the support of a small “rebel alliance” of principled clergy Members and Officers, this ungodly history within the Unite Faith Workers’ and the wider Union is now the subject of legal processes, and public exposure of how antisemitism, homophobia, discrimination and bullying have become endemic to this particular holy huddle of clergy union men.  Predictably the initial reaction the Unite Regional Secretary was to attempt to dismiss the complaints after a farcical internal “investigation” in which none of those raising concerns were actually contacted by him.

I am a spiritual teacher in a Hindu community which only too well recognises and stands with the Jewish community’s anguish about antisemitism, and my people have deserted Labour in droves precisely for the same issue of liberal narcissism, which loudly vocalises its abhorrence of racism, antisemitism, homophobia and other prejudices, while actively colluding with cover-ups of the very same within its own institutions.  That’s part of the problem of nice people who are always right and better than the rest of us – they just can’t possibly ever be in the wrong, and how dare you anyway…

From my years of dealing with religious power and hierarchy, I found Unite Faith Workers’ Branch as infected with narcissistic clericalism and tribalism as any Archbishops Council, and the behaviour of union officials as boorish as party cadres who have for far, far too many years been elevated in unaccountable greatness.

It is within such a substrate of cosy self-congratulatory committees which for years remain quite devoid of any culture of self-criticism and self-checking, that quiet backroom targeting of whistleblowers, discrimination and abuse fester and grow.

As the Labour Party now faces its reckoning with precisely such a cultural legacy of endemic Jew-hate and cover-up, it is vital that we turn now our searchlights brightly upon the unions and also those faith-based political groups, NGOs like “London Citizens”, and assorted narcissist “red reverends” who have actively colluded with such corruption.