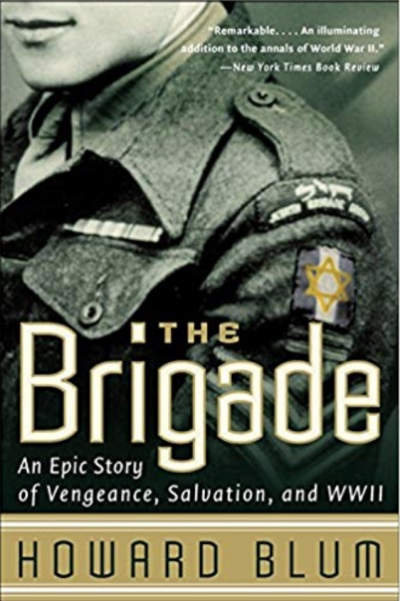 I have been reading the book The Brigade by Howard Blum and was unable to put it down until I finished it. The book documents the activities of the British army’s Jewish Brigade at the end of World War II and in the following months.

A unit 5,000 strong and mostly consisting of Jewish volunteers from Palestine, but also with a fair few Jews from elsewhere, Blum does a fantastic job of bringing this unit to life.

He mostly tells the story through the eyes of three soldiers in the brigade and their role in hunting down Nazis and rescuing survivors from the camps and engineering their arrival in Palestine.

Blum estimates they hunted down and killed between 200-300 Nazis using their status as British Army troops to move around Europe with impunity in the immediate post war Europe. Some of their activities are also covered by Ronen Bergman in his, also excellent work, Rise and Kill First.

Some quotes from the book that affected me:

In camp, the colonel was furious. “If you have the opportunity to shoot the enemy,” he lectured a startled Peltz,  “do it! Don’t think so much. That’s what’s wrong with you people. You think too much.”

“Fix bayonets!” he ordered.
There was the distinct sound of the steel bayonets clicking onto the steel barrels of the rifles.
“Up…”
Two platoons of soldiers rose.
“…and charge!”
Shouting madly, a roar in a Babel of languages and accents, Hebrew, Polish, Yiddish, English, the troops raced
forward, bayonets in their hands.

Zekowitz attached the flag to the barrel of a rifle, and then climbed to the roof of the
German command building. High in the Italian sky, the Star of David blew in the small, soft breeze. Standing on farmland littered with the bodies of dead Wehrmacht soldiers, the men
cheered. They had won. Jews had beaten Germans.

Finally, Carmi moved to the center of the room and spoke to the men. He did not attempt to put together an argument, a justification for the course they were setting out on. Vengeance was like faith. You believed, or you did not. You either accepted that blood would assuage blood, or you did not. The fact that the men had come to the farmhouse was proof of their commitment.

In his brusque voice, he told them how it would be arranged.

“This is family business,” Carmi said toward the end of his brief remarks. “Only Jews can do what has to be done.”