The UK Islamic Mission (UKIM) has added another speaker from Jamaat-e-Islami to its upcoming tour: Abdul Rashid Turabi. He is the Islamist party’s leader in Kashmir.

He is scheduled to speak in Birmingham on 23 October, along with fellow party members Qazi Hussain Ahmed and Siraj ul-Haq. 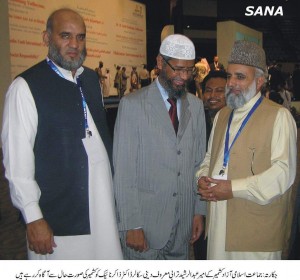 Abdul Rashid Turabi, on the right, at a conference in Indonesia with Zakir Naik (centre), an Islamist preacher who has been banned from the UK.

Here is how an enthusiastic supporter describes Turabi on a blog that has been shut down:

Abdur Rashid Turabi had been worked as the JI AJK Secretary General since 1984 to 1985 while he was elected as Amir in December 1989 after death of Col. Rasid Abbasi from 1989 t0 2002. He played very vital role for the freedom of Kashmir and made arrangements for people in the launching of Jihad in 1990 and people migrated from occupied Kashmir.

Abdur Rashid Turabi held conferences and Jihad rallies in various areas of AJK to create awareness among the people about Jihad. During his Amir as the JI AJK, he visited various countries and addressed conferences, seminars to highlight the Kashmir issue at international level and he is basic role of the freedom movement.

He convinced and prepared Pakistani people for Jihad and took part in the struggle of Mujahideen and Muhajreen.

The West, Turabi says, wants nothing less than the destruction of “Islamic identity”, while the US and “Zionists” want to get their hands on Pakistan’s nuclear weapons:

Azad Jammu Kashmir (AJK) Jamaate-Islami (JI) Amir Abdul Rashid Turabi stated the youth of Ummah was the real target of Western cultural invasion. He expressed these views while addressing a convention held by Jamiat Talba Arbia NWFP in Peshawar. He said that the conspiracy to snatch the Islamic identity from the youth by misguiding them was being hatched and the efforts to divide the Ummah in sects were being made. He said the US imperialists and Zionists were conspiring to snatch the Pakistani nuclear assets and Kashmir which was the lifeline of the country.

The Jews are definitely up to no good. In the aftermath of 9/11, Turabi said they have teamed up with the Hindus to destroy Muslims:

Abdul Rashid Turabi has said that peace and harmony in the world could not be achieved until the independence of suppressed Muslims of Kashmir and Palestine. Addressing the office bearers of Jamat-e-Islami AJK, he said that Jewish and Hindu community had both joined hands for annihilating Islamic community and all of their actions were targeted towards the destruction of Muslims.

He also argued against Pakistan’s official support for the invasion of Afghanistan, which risked “irreparable loss” for Muslims:

He resented military government’s stand on the prevailing crisis in Afghanistan and said that cowardliness by Muslim leaders at this occasion could cause irreparable loss to the overall standing of Muslims. The Ameer said that America and its allies were also targeting Muslims after airborne crashes of planes in United States and no body was pointing out terrorism of Indian and Israeli forces killing thousands of innocent Muslims.

Nor should al Qaeda and Taliban finances be touched:

He flayed United States declaration of Al Rashid Trust as a terrorist organization saying it was not involved in any kind of terrorist activity and it was a planed move by America trying to sabotage the image of Jihadi outfits.

The Rashid Trust was one of America’s first terror finance targets after 9/11. This is how the government described it:

This organization had been raising funds for the Taliban since 1999. The Al Rashid Trust is a group that funded al Qaida and the Taliban and is also closely linked to the al Qaida-associated Jaish Mohammed terrorist group. Al Rashid has been directly linked to the January 2002 abduction and subsequent murder of Wall Street Journal reporter Daniel Pearl in Pakistan. Al Rashid and other fronts and groups have used a British internet site called the Global Jihad Fund, which openly associates itself with Usama bin Laden, to publish bank account information and solicit support to facilitate the growth of various jihad movements around the world by supplying them with funds to purchase their weapons.

All of this is par for the extremist course with Jamaat-e-Islami. Consider this ludicrous bid to stir up religious hatred from earlier this week:

[Current party leader Syed Munawar Hasan] said the world peace and the Middle East were threatened by the US-Israel collusion while Islam, the Islamic civilisation and the Muslims were the target of the biased Christian rulers, and now the Christian religious leaders too had joined them.

This should be an eye-opener for the Muslim rulers. The Quran burning plan of a priest and the Church was not simply a brainchild of a single mind as the whole Christ is a world and the Vatican was behind the move, he pointed out.

Or this press release from early October:

Dr Farid Ahmed Piracha, deputy Secretary General, Jamaat e Islami, Pakistan, has exhorted the rulers to announce permanent stoppage of NATO supplies as a token of national self respect and dignity.
…
He demanded total ban on NATO supplies, shooting down of drones and helicopters intruding into Pakistani territory and withdrawing air bases under the US control.

Among others, those supply lines serve British troops in Afghanistan. If they were shut down, the effect on the war effort would be devastating.

And senior leaders of this party expect to be welcomed to this country? Apparently so.

It seems that one person who will welcome the Birmingham group is Salma Yaqoob of the “Respect” party. She is scheduled to speak at the event.

This is what the party said in September when one of its members was exposed as an antisemite:

The Respect Party is committed to opposing prejudice and racism wherever it appears. We believe that racism divides communities, undermines human dignity, leads to hate and allows those trying to reduce resources and facilities to find easy scapegoats. Anti-Semitism has been a favoured form of prejudice in Europe over the last century and Respect is totally hostile to it.

So I look forward to Salma Yaqoob withdrawing from this UKIM / Jamaat-e-Islami event.