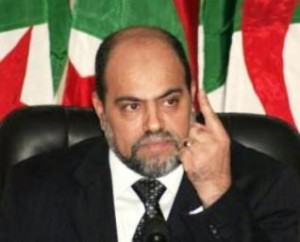 This makes him a natural for work with Viva Palestina, George Galloway’s Hamas support operation.

Sure enough, members and supporters of his party took part in the convoy by sea in May. Their efforts were hailed by Hamas leader Ismail Haniyeh:

He further indicated that the Algerian vessel represents the Arab Nation’s resistance and the Algerians’ pride that have always been at the forefront for the support of the Palestinian cause.

Hania’s declaration has moved thousands of participants that flocked from different corners of the country to take part to this event, including representatives from different movements in the Arab world like the Islamic Resistance Movement “Hamas” led by Ahmed Merzouk and Oussama Hamdane and the Mauritanian movement “Tawassoul”.

According to this report, Soltani is at it again.

Algerian leaders bring a message of solidarity to convoyers at Latakia, Syria. Abudjarra Sultani, a minister in the Algerian government, called on all Arab couintries to “make a siege on those who make a siege on Palestine”.

Soltani is certainly a very big fan of Hamas. Here he is at a press conference in 2009:

“I will be the first to lead the batallion of young Algerian jihadis if we find the way to jihad in Gaza.”
…
Denouncing the classification of resistance organisations as terrorist groups, Soltani hammered home, not without pride, that he would be the first to be classified in this case.

Furthermore, the head of the MSP will today send a delegation to meet the leaders of the Palestinian resistance [i.e. Hamas] and notify them of “our gratitude for their fighting, our support and our solidarity”.

In addition, and as surprising as it may seem, Soltani announced that his group will hold a ceremony on 29 January at La Coupole in Algiers to celebrate the victory of the Palestinian resistance in its war against the Israeli occupiers.

Soltani has it in for the US too. In 2004 he signed this jihadi declaration (pdf) calling for attacks on US troops in Iraq and support for al Qaeda detainees. Have a look at the kind of language this man backs:

In view of these savage crimes implemented in Iraq and Palestine by the hands of the Zio-American pact not only against the Arabs and Muslims, nay against humanity in general, and the preparations taking place in Darfur in Sudan, the signatories of this call who incorporate religious scholars, leaders of the Islamic Movement, intellectuals and preachers:

1) Express their utter condemnation of the savage crimes that are taking place in Iraq and Palestine night and day, by the hands of the Zio-American pact and its allies, and even those who follow it quietly.

2) Reiterate their complete solidarity with the Iraqi and Palestinian people, and their honourable and courageous national and Islamic resistance; call on both to unite their ranks to resist the occupation, avoid collusion or extremism or sectarianism of any kind whatsoever; confine [their activities] to military resistance against the occupation; and consider the Iraqi and Palestinian blood to be a red line.

3) Reassure their full support in the case of the detainees in all Zionist and American prisons in Palestine, Iraq, Guantanamo and Afghanistan, and condemn the savage crimes involved in these detentions – crimes that disgrace humanity.

As for his own opponents, how about torture? In 2009 Soltani was due to address a conference in Switzerland. He fled the country when he learned the Swiss authorities were looking for him. Here’s why, according to a Swiss human rights group:

On 12 October 2009 TRIAL (Track Impunity Always – Swiss Association against Impunity) submitted a criminal complaint to the investigating judge in the Canton of Fribourg, charging Mr. Bouguerra SOLTANI with acts of torture. The following day, the victim, Mr. Nouar ABDELMALEK, joined the proceeding as a civil party.

In July 2009, TRIAL had already filed an individual communication against Algeria before the UN Committee against torture on behalf of M. ADBELMALEK. The communication referred to the multiple tortures he suffered in his country between 2001 and 2005. Mr. SOLTANI is among the individuals denounced by the victim for having organized a torture session. Mr. ABDELMALEK, owing to the abuses he endured, was later granted refugee status in France, where he is now living.

In the framework of his functions at the Ministry of Defense, M ABDELMALEK published a report in 1998 in which he expressly mentioned Mr. SOLTANI’s implication in the recruitment of a young Algerian Islamist sent to Afghanistan. After the report was released, Mr. ABDELMALEK was discharged from his official functions but continued criticizing Mr. SOLTANI in the press.

In June 2005, Mr. ABDELMALEK was arrested on the basis of fallacious charges. Policemen brought him to the brigade of Beni Messous where he suffered torture for several days. In the morning of the 1 July 2005, officials transferred Mr. ABDELMALEK to the Châteauneuf facility, notorious for being Algeria’s main center for torture and arbitrary detention.

Electric shocks and other abuses

On the same day, Mr. SOLTANI, then Minister of State, went to the room where Mr. ABDELMALEK was detained in order to personally direct a torture session which lasted for about 2 hours. During that session, the victim was subjected to waterboarding, to several electric shocks on the stomach, feet and hands, his ankles were twisted as if to break them and a screwdriver was even introduced into a recent wound on his right foot.

With the purpose to make Mr. ABDELMALEK sign fake declarations and blank documents, Mr. SOLTANI openly directed the session, encouraging and inciting the agents to carry out these inhuman acts. Mr. ABDELMALEK was also threatened of not leaving the facility alive.

Yes, Mr Soltani is another perfect partner for the fanatics and extremists of Viva Palestina.