Jamaat-e-Islami is a South Asian Islamist party. It was founded in 1941 in Lahore by Maulana Maududi. You can read a short profile of the “godfather of Islamism” here. His main goal in life? An Islamic state. In the whole world.

It must now be obvious that the objective of the Islamic jihad is to eliminate the rule of an un-Islamic system, and establish in its place an Islamic system of state rule. Islam does not intend to confine his rule to a single state or a hand full of countries. The aim of Islam is to bring about a universal revolution. Although in the initial stages, it is incumbent upon members of the party of Islam to carry out a revolution in the state system of the countries to which they belong; their ultimate objective is none other than world revolution (from his book “Al-Jihad fil-Isla” [Jihad in Islam] ). 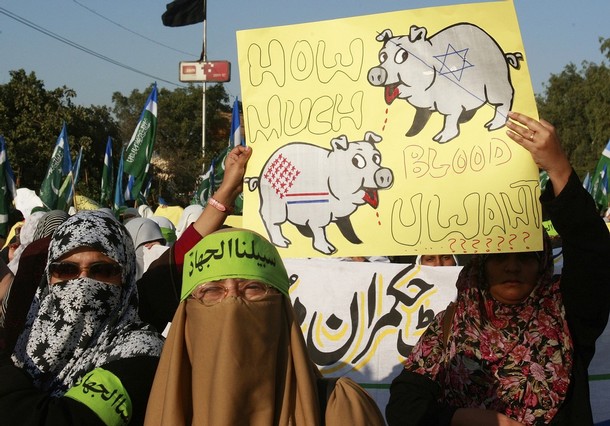 A Jamaat rally in Karachi, 2009. The headband reads “Our path is jihad”.

The UK Islamic Mission (UKIM) is one group that continues to follow the man’s teachings, which you will find on its “dawah” (propagation) pages here and here. In fact, secularism is one of UKIM’s top targets:

This is only through sincere and dedicated efforts in this direction that we can, with the help of Allah, ensure a brighter future for the Muslim community in the UK, and for the British society as a whole, to be saved from the pernicious effects of materialism and secularism.

UKIM is also a promoter of Jamaat-e-Islami. From October 22 to 31 it will run a fundraising drive at ten events up and down the country featuring two Jamaat leaders. They are Qazi Hussain Ahmed, a former president of Jamaat-e-Islami who also headed the MMA, an alliance of Pakistani religious parties, and Siraj ul-Haq, a regional leader in the North-West Frontier Province.

It’s a safe guess that UKIM is very pleased to host such “distinguished” Jamaati guests. Others should be horrified that any British Muslims want to hear from men who are simultaneously completely ridiculous and quite sinister and nasty.

As for the government, it should consider banning both of them. That is just what the Belgian and Dutch governments did to Ahmed in 2004, when he was due to address a meeting of the Arab European League, a Belgian extremist group led by Abou Jahjah, a disgusting antisemite and riot starter.

Let’s take a look at just a few of Qazi Hussain Ahmed’s opinions over the years. 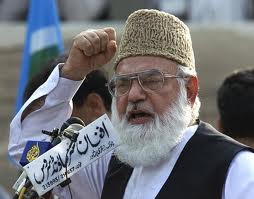 He also said Bin Laden could not have carried out the 9/11 attacks because he lacked the “ability”; he said the Jews had done it, first giving the day off to all Jews working in the World Trade Centre.

You can see Ahmed running the same ridiculous line in 2005 in a BBC Hard Talk interview.

I don’t believe that Osama bin Laden is capable of this sophisticated activity.

The Muslims are not the beneficiaries. The beneficiaries are the Zionists and this has been planned so that this clash of civilisations, this theory is proved

This is actually quite funny when Ahmed himself met bin Laden during the rather successful jihad against the Soviet Union in Afghanistan (Jamaat-e-Islami was a key player in that war).

On the Taliban and al Qaeda
Leave them alone. Or else. This was the party’s reaction to the invasion of Afghanistan in 2001:

Chanting “Osama is our hero” and “US should stop atrocities on Afghanistan,” the protesters from the right-wing Jamaat-e-Islami party clashed with police after evading tight security in Jacobabad in the southern Sindh province where the US military is using an air base to provide logistical support for attacks on Afghanistan.

The clash came after hundreds of activists from the party — the largest religious party in the country — and other pro-Taliban groups were detained during the previous 24 hours in a government crackdown on anti-American demonstrations in the city, police and party sources said.

Party sources said they would attempt more protests after Qazi Hussain Ahmed, the head of the party, vowed to defy a government ban on the demonstration.

“We will continue our peaceful campaign till the removal of [military ruler General Pervez] Musharraf’s government, which has supported the United States,” said Ahmed, who was stopped by officials from boarding a plane to make his way to Jacobabad.

“We don’t want to fight in the streets but if Musharraf’s government falls, the policy will automatically change,” he said.

Some party members do rather more than leave al Qaeda alone:

Since 9/11, the JI have also been accused of providing al-Qaeda operatives with safe houses, and when 9/11 mastermind Khaled Sheikh Mohammed was apprehended in 2003, Pakistani authorities claimed that he was being sheltered in the house of a JI district counselor. According to Ahmed Rashid, in his latest authoritative study on the Taliban Descent into Chaos:

“Al-Qaeda’s attacks after 9/11 in Pakistan and abroad would have been impossible without the support network provided by Pakistan’s extremist groups and individual militants from mainstream Islamic parties such as the Jamiat-e-Islami.”

While addressing a press conference at Idara-e-Noor-e-Haq on Monday, Qazi rejected the notion that Taliban were destroying girls” schools in Swat. He alleged that Pakistans intelligence and security agencies were involved in schools destruction, and the allegation was was part of the governments propaganda.

On Kashmir
In 2002 President Musharraf tried to rein in the jihadis who wreak havoc in Kashmir. Ahmed was furious:

He said no one in Pakistan had the right to create obstacles in its way.

The Jamaat leader accused President Musharraf of giving in to the pressure from the United States and Britain, which he described as nothing short of betrayal.

Mr Ahmed said the people of Pakistan were not afraid of another war with India and asked President Musharraf to take a firmer stand in support of the struggle of the Kashmir’s Muslims.

“Now is the time that we should be prepared for Jihad. This Jihad will be against oppression,” he told the rally.

“And the jihad in the way of Allah (God) is not terrorism.”

“I salute the girl who killed five American soldiers in a suicide attack in Iraq,” referring to an attack late on Saturday on an allied military checkpoint.

On Terrorism in Pakistan
This one too is easy peasy. It’s the Americans. For example:

And the Indians, in cahoots with the Americans:

Alleging that the government was providing logistic support to the US forces engaged in “killings Muslim brethren in Afghanistan”, he said that the US government wanted to establish Indian hegemony in the region and for this purpose, it was using the armed forces of Pakistan.

Gen Musharraf’s foreign policy, Qazi Sahib lamented, had remained a total failure since the Pakistan friendly government in Kabul was overthrown and now pro-Indian administration in Kabul has established Indian missions in every Afghan city from where terrorists are operating inside Pakistani territories.

In 2006 Pakistan passed a “Protection of Women Bill”. There was a serious problem to address:

Until now, rape cases were dealt with in Sharia courts. Victims had to have four male witnesses to the crime – if not, they faced prosecution for adultery.

Under the amended law, the civil courts will be able to try rape cases according to the British-influenced penal code

Once again Ahmed was furious:

Meanwhile, in a continuing series of angry diatribes, MMA leader and chief of the influential Jamaat-e-Islami party (JI), Qazi Hussain Ahmed, described the bill as being “un-Islamic and designed to encourage immoral behaviour.”

Indeed, better protection of basic rights for women is another US plot:

Qazi said that US want to impose its new world order, and Women Protection Bill in Pakistan is a component of that strategy.

US wants to dismantle the family structure in Pakistan to prevail obscenity.

The title of the Jamaat-UKIM tour is “European Muslims: Working For A Better Future”.

The future would indeed be better if the whole tour was cancelled immediately.