Rachel Riley, co-host of Countdown, has recently emerged as an eloquent and determined voice against antisemitism on the left. Although today’s papers are full of her spat with George Galloway – she got an awful lot of likes for that tweet – of more interest is her long interview with Channel 4’s Krishnan Guru-Murthy.

Riley spoke very compellingly about how she gradually became aware of antisemitism having previously had little direct experience of the problem and not been politically active.

It was the ‘Enough is Enough’ demonstration which first made her take notice of the crisis in the Labour Party – initially she hesitated to get involved (2:00) but eventually got pulled in to the debates on Twitter.

She discussed very thoughtfully why the ‘Israel is a racist endeavour’ posters unsettled her (around 5:00), and went on to her explain her opposition to anti-Zionism as a response to the complexities of the current situation, as well as robustly defend her right to take a stand against antisemitism without being drawn into arguments about Israel (12:00)  She was also very forthright and precise on just why there is a problem with Jeremy Corbyn (from 19:30) and (from 23:00) on the insidious nature of antisemitic tropes.

One detail from this interview has been singled out for unfair criticism. Early in the interview she responded to a question about her Jewish identity. During her response to Guru-Murthy’s observation that many people didn’t know she was Jewish, Riley observed ‘I don’t look like a typical Jew’. (6:55) On the page, that might look careless or naïve.  However if you watch the interview it is clear that she put virtual ‘scare quotes’ around this statement – and if she had said ‘stereotypical’ that might better have captured the thrust and tone of her point in its context.

Michael Rosen was quick to interpret this brief aside in the most unsympathetic – and indeed perverse – way. 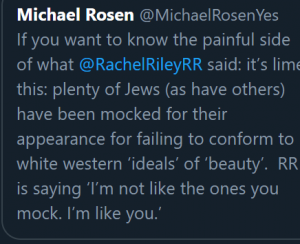 Here’s a sample of just a few of the well-earned rebukes which came his way. 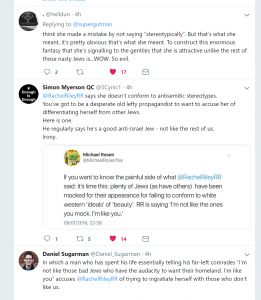 And finally here’s Daniel Sugarman’s own very helpful analysis of the ‘typical Jew’ controversy and some broader reflections on the attacks on Rachel Riley.