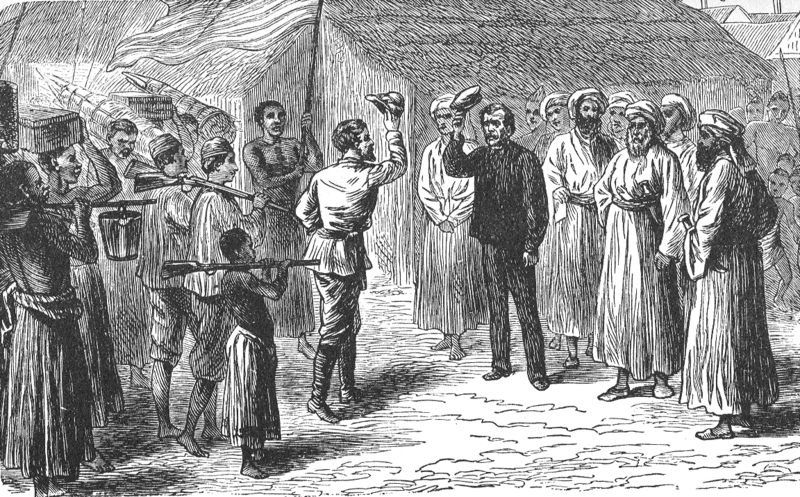 Stanley’s first meeting with Livingstone is one of history’s most memorable, but a Glasgow statue of the great abolitionist is now “problematic”.

At ten he started working at a mill that “likely” used West Indian cotton, the owners of which were more benevolent than many, enabling him to become educated. He later praised them (for helping him) so he’s “problematic”.

The first is anti-imperialism, the “West”, (particularly) America, Britain, NATO and, of course, Israel – racist white imperialist European settlers invading and colonising Palestine – is the root of the world’s problems while aggressive, expansionist, imperialist countries like Russia and China are excused.

The second is Critical Race Theory (CRT) which Delgado and Stefanic define as:

That’s a revolutionary rejection of the modern world. Marx’s oppressors and oppressed change from the bourgeoisie and proletariat to whites and blacks; Marx sought class conflict, CRT seeks race conflict.

“I have a dream that my four little children will one day live in a nation where they will not be judged by the colour of their skin, but by the content of their character.”

by assigning characteristics on the basis of skin colour, i.e., racism.

It contends that the “system” was created by racist whites to preserve their supremacy/privilege, hence systemic/institutional racism and, whatever the question, the answer is racism.

If the modern, western, world is systematically/institutionally racist the past was the same, so the aim is to “tag” historical figures as racists or slavers.

The rules are made up as you go along, and the goalposts move continually. A good analogy is Mornington Crescent, but this game finishes when someone cries “racist!”

Slaver, imperialist and colonialist are used synonymously with racist. Outside wokeland it ain’t necessarily so as none a priori require racism.

“Decolonisation” is a tenet, although dewesternisation or dewhitification are more accurate. UCL wanted to limit the number of “dead white men” – Lysenkoism.

Livingstone had few options, being born when most children had to become productive as soon as possible. Early nineteenth century children probably knew little about cotton and others were “complicit”. Everything was transported resulting in wages that paid rent and fed families. The landlords and merchants then fed their families… Where does it end?

Two centuries later we’re economically intertwined with China and if only a few of the reports about the Uighurs are correct it’s a massive crime against humanity.

Normal becomes exceptional. Many worked in cotton mills and some employers were above average. Livingstone is remembered as he rose above the circumstances he was born into.

An important lesson is how children were removed from factories, the “bad news” is that it’s largely because of dead white men legislating.

Dead white men abolished the slave trade and slavery in the Empire before Livingstone arrived in Africa – but the East African trade continued. There’s more “bad news” as Africans often enslaved other Africans and the first transaction was one African selling another.

Slavery has existed for millennia and even the Romans recognised it as a potential powder keg. Europeans arrived late and joined existing networks, subsequently saw it as evil and Britain expended blood and treasure on its suppression. The dead white men made mistakes but the world was a better place.

Livingstone isn’t unique; Wordsworth, another abolitionist, was “tagged” by the National Trust because his brother John captained an East India Company ship to China!

Like To Kill a Mockingbird none of this fits the “Theory” and those aware of the underlying ideology weren’t surprised at a “problematic” Livingstone, it just reinforces the need for Save our Statues, History Reclaimed and Restore Trust.

Livingstone wasn’t a saint but a true anti-racist social justice warrior who cared about Africans and strove to get them a better deal, they knew it as do their descendants.

Britain made the equivalent of about three per cent of all capital formation in 1770 from slavery and a few Britons became wealthy.

Industrialisation put the Great into Britain; the inventive genius of the Enlightenment, powered by water and then steam, dramatically increased productivity and helped make slavery obsolete.

There’s plenty of this tawdry stuff, often from supposedly reputable organisations, full of the sins of the father, guilt by association, etc, etc but it can be countered to show that, although the “Theory” predetermines guilt for anyone western/white, the real number is small, which doesn’t fit the “Theory”!