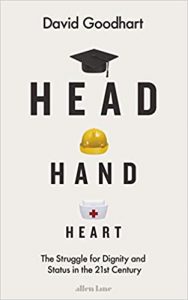 David Goodhart’s Head Hand Heart: The Struggle for Dignity and Status in the 21st Century is a continuation of the themes the author identified in his influential previous work – ‘The Road to Somewhere’ (2017) – in which he argued that high achieving and  high status  globalist workers (the ‘Anywheres’) are increasingly, and wrongly, valued over and above the ‘Somewheres’.

Adding to this division in his new book, Goodhart addresses what he refers to as the three human aptitudes of Head, Hand, and Heart, corresponding roughly to cognitive, manual/craft, and caring/emotional aspects. The central argument of the book is that cognitive ability has taken over and has become the gold standard: a highly esteemed cognitive class now shapes society in its own image, whilst people who work in skilled trades, even though they may have a great deal of technical knowledge and might earn a good living, are not awarded the same kind of status and influence. And Heart workers, such as care assistants, are at the bottom of the pile.

Hand and Heart workers, Goodhart suggests, tend to be ‘ Somewheres’ – people who value stable neighbourhoods, community and belonging, continuity and tradition, want well managed national borders, may not have a college degree, and may not want a career, preferring instead to see a job primarily as a means to earn money and support their families. Their feelings, priorities, and values, are not well represented among the political class.

Contrastingly, the highly educated are usually more affluent and liberal than the average, and have ‘a disproportionately loud voice in the political system ‘ (p149) They generally prioritise individual success, self-actualisation, opennness, novelty, autonomy, and find social change comfortable. This mindset dominates higher education, media and government, and makes it difficult for highly educated people to ‘understand small-c conservatives’ (p11).

But the author argues that economic trends will eat into much cognitive employment, and in any case, the Covid pandemic has brought about a re-evaluation of care work, and consequently, those deemed essential workers, who are not usually accorded high status, have become more appreciated. He suggests that a significant proportion of jobs that require quite high levels of academic qualification are demonstrably less useful for society and are less productive than many less qualified jobs.

The question is then how to get a better balance between the three domains so that, for example, going to college to get a degree is not seen as preferable to learning valuable and practical skills via apprenticeships. Currently, non–academic post school training has become a Cinderella. Yes, as one might say, a degree in post-colonial studies will not mend the boiler.

The author has several ideas about re-balancing , some more practical than others. His suggestion that all school pupils should learn a manual or technical skill, in order to rediscover the pleasure of handling materials and making something sounds interesting, but his idea of ‘celebrating craft’ seems a bit whimsical and William Morris–ish. Working as a thatcher, cheesemaker, or making craft beer might be enjoyable, but those occupations are surely not mainstream employment.

Whilst I find his defence of housewives and home makers admirable, and to be fair, he does not want to undermine the advances women have made, suggesting that the state should subsidise mothers who want to stay at home sounds too much like the old wages for housework idea.

I agree with his plea for the upgrading of care work, both in terms of status and remuneration. Goodhart wants to see more men going into care work and nursing. But the idea that nurses and medical professionals should focus more on emotional and human interaction with patients is, I think, misguided. These professionals need a certain amount of detachment and emotional distance in order to do their jobs properly. Too much empathising could undermine them.

A new system of ‘education for life’ – re-balancing the universities away from the standard undergraduate student towards ‘educating people for democracy and for mental and physical well-being’- would result in a more educated and cultured citizenry. A bit like the old WEA, perhaps.

The book is written in a chatty, accessible style, and though it draws on a very wide range of sources – perhaps too many as it feels a bit random at times – it is not meant to be an academic text. However the author has interesting ideas, and his critiques of higher education and the political class are persuasive.