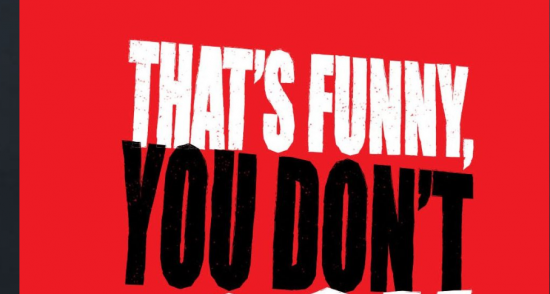 It’s interesting to look at the range of people and groups that have endorsed NoPasaran’s reissue of Steve Cohen’s 1984 classic, That’s Funny, You Don’t Look Anti-Semitic: Ruth Smeeth, Clive Lewis, Marlon Solomon, Daniel Randall ( of the RMT), Rachel Shabi – and Momentum.  Any debates which touch on antisemitism – or Israel-Palestine – tend to divide down the middle, but this book almost does the opposite, (apparently) bringing together a very broad middle ground but tacitly excluding those further away from the centre.  (I think Keith Kahn-Harris might approve.)

In his foreword to the new edition Tom Cohen, Steve Cohen’s son, describes how his late father began to be aware of antisemitism on the left after the Israeli invasion of Lebanon in the 1980s.  Cohen strongly opposed Israel’s actions but was horrified by some of the positions taken by the supposedly ‘anti-racist’ left. Tom Cohen draws readers’ attention to the continuities between the situation when his father was writing, and the current political context – the same conspiratorialism, the same urge to sweep the problem under the carpet lest it distract from battles with the right, and the same arguments about antisemitism not fitting the patterns of ‘structural’ racism (pp.vi-ix).

That’s Funny was first reissued by Engage in 2005 and Steve Cohen’s preface to that edition is included in the NoPasaran volume. Here and elsewhere Cohen presents a challenge to readers with different perspectives on antisemitism. ‘Zionism is anti-racist. And Zionism is racist’, he asserts. (p. x) Cohen insisted on a separation between anti-Zionism and antisemitism but found that, in practice, much anti-Zionism was tainted by racism. He writes bitterly about the way some on the left, back in the 1980s, refused to accept him as a genuine anti-Zionist because of his determination to call out antisemitism (xviii). This hostility led to him identifying as an ‘anti-Zionist Zionist’.

In the same 2005 preface Cohen highlights a few areas on which he’s shifted his position. One of these is the relationship between the Islamic world and antisemitism which, he explains, he had originally underplayed.  There’s a characteristic determination to offer no comfort to any one ‘side’ here:

Moreover whatever the significance today of Left antisemitism, its influence and social weight is insignificant compared to that within Muslim communities (an antisemitism which is possibly matched by racism within the Jewish community.) (p. xxii)

The 1984 text itself opens with a cry of frustration which could easily be echoed by today’s anti-racists.

[A]ny attempt to raise even a discussion about the antisemitic nature of much socialist practice is almost invariably met with apoplexy and vilification. It is virtually a taboo subject. (pp. 3-4)

Cohen goes on to write lucidly about antisemitism as an ideology, about its conspiratorial core, about its relationship with Christianity and about its total irrationality, its capacity to embrace utterly opposed claims about Jews: ‘Literally everything can fit into the conspiracy. It is infinite.’ (p. 11) He also offers a fascinating, and chilling, dissection of the nakedly antisemitic views propounded by many early left wing groups and trade unions – in particular their support for the Aliens Act of 1905.  He deplores the way many on the left – and Tony Greenstein is singled out here (p. 52) – erase the shameful historical intersection between antisemitism and socialism:

It is as though the political agitation by the trade union movement, which was antisemitic to the core and supported by many socialists, to keep Jews out just did not happen. (p. 52)

Later in the book, Cohen goes on to explain just how – and why – he denies an equivalence between anti-Zionism and antisemitism, even though he certainly agrees that many who identify as anti-Zionist are indeed antisemitic:

In fact, antisemitism in this context, as in every other context is rooted in a variant of the world Jewish conspiracy. This has two linked aspects in relation to notions of ʹZionismʹ: (a) the concept of Zionism is expanded to equate it with world domination; (b) the entire Jewish experience is reduced to ‘Zionismʹ—and likewise all Jews are held to be responsible for Zionism. This is the concept of collective guilt which is intrinsic to theories of the world conspiracy. It is the presence of these ideas which distinguishes antisemitism from genuine anti‐Zionism. (p. 61)

One way in which Cohen’s approach differs from that of many anti-Zionists is that, while thinking Zionism the wrong solution, he fully acknowledges the historical context which led to its growing acceptance by Jews: ‘Zionism is itself an attempt by Jews to escape the scourge of antisemitism, in a world where no other escape routes have become apparent.’ (p. 63)

Whatever one thinks of Cohen’s own brand of anti-Zionist politics, he certainly offers a devastating account of the ways in which anti-Zionism has so often morphed into antisemitism in leftist circles – culprits include the WRP paper Newsline, the SWP and the Big Flame newspaper. He is also trenchant in analysing and denouncing the imposition of collective guilt on Jews, and the perverse accusation that Jews, ‘you of all people’, failed to learn the correct lesson from the Holocaust.

In fact, the theory that our own suffering should have cleansed our souls owes more to the gospels than to Marxism. What our suffering points to is the need to combat antisemitism. It is no advertisement for the purity of our morals. (p. 79)

Although the 1980s far left seems in some ways very similar to its modern equivalent, there is one respect in which the landscape seems to have altered – assimilationism.  It no longer seems true that ‘Assimilationism has today reached the status of a tenet of faith on the left’ (p. 92). This has been replaced, for much of the left, by a preference for multiculturalism (as a political process). Cohen goes on to interrogate the history of the left’s attitude to Jewish assimilationism – or distinctiveness. He is particularly wary of those who speculate over the reasons for Jewish survival.

The fundamental difficulty with [Abram] Leonʹs work is that the original question he sets out to answer—what is the reason for the  ʹmiracleʹ  of Jewish survival?—is a strange one. A similar interrogative is not normally asked about any other people or group. No‐one usually asks why the English, who have state power, or the Irish, who live in an occupied state, or the Romany gypsies, who have no territorial state, have survived. These could well be important and interesting questions, but why is the question asked only of Jews? (p. 109)

Cohen suggests that it was the Jewish ‘elite’, in the late nineteenth century, which was most anxious to assimilate – and sometimes critical of Jews who failed to do so.  The parallel is obviously not exact but there are interesting echoes of today’s cautions against separatism in other communities in this extract from an article which appeared in the Jewish Chronicle in 1888.

ʺIf poor Jews will persist in appropriating whole streets to themselves in the same district, if they will persevere in the seemingly harmless practice of congregating in a body at prominent points in a great public thoroughfare, like Whitechapel or the Commercial Road, drawing to their peculiarities of dress, of language, of manner, the attention which they might otherwise escape, can there by any wonder that the vulgar prejudices of which they are the objects should be kept alive and strengthened?ʺ (28.8. 1888). (p. 119)

As I read the chapter on ‘Left Responses’ towards the end of the book it became tempting to quote every point, so precise were the parallels with today’s left apologias (and worse) for antisemitism. Cohen deftly sketches the history of so many persistent tropes – the accusation that Jews are claiming special privileges, the claim that they are exaggerating the problem, the willingness to hide behind a minority of Jews on the left who appear to share, or tolerate, antisemitic views, the tendency to pay dutiful lip service to opposing antisemitism while demonstrating antisemitic attitudes, the insistence on the left’s exemplary record on racism – which means any culprits are simply anomalies – and the list goes on.

Even though I’ve read quite a few books and articles on this subject I found That’s Funny a riveting and insightful read and thoroughly recommend it.  Thank you to the Jewish Labour Movement and NoPasaran for teaming up to send free copies to all JLM members.