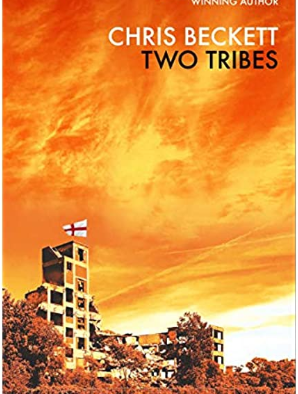 The experience of reading Two Tribes, Chris Beckett’s most recent novel, reminded me of some of the debates we’ve had on Harry’s Place over the years – in particular around Brexit.  At the heart of the story is the relationship between Harry, an architect who lives in London, and Michelle, a hairdresser based in a small town in Norfolk.  Harry’s ‘tribe’ is Remain, whereas Michelle is a committed Leaver.  Chris Beckett describes the dynamic of their sometimes uneasy friendship in a blog post here:

The main protagonist of Two Tribes is a man, Harry, who, in the latter half of 2016 notices that his own group’s flag is, after all, just one of several flags. He doesn’t reject it, but he becomes suspicious of the claims his friends make for it. He meets a woman, Michelle, who, so to speak, lives under the enemy flag. Both of them are intrigued by this because in other respects they like each other very much.

The story is largely seen from Harry’s perspective. Even before meeting Michelle, he starts to question the tribal certainties of his friends.

‘If Parliament had any guts it would simply disregard the result of the referendum,’ Phil boomed, and Richard roared that it had been ridiculous to ask the general public to make a decision on a matter as complex as this.’ (p. 7)

Harry begins to confront the fact that his own Remain vote was as much the result of tribal instinct as Michelle’s wish to Leave: ‘we’re both just repeating things we’ve been told’ (p. 81). A new friend is shocked and startled when he begins to question whether the Leavers’ false claims might not be matched by similar evasions on the Remain side.  He even starts to wonder whether his own comfortable certainty that immigrants don’t take away jobs fully applies to every local instance. (p. 82).

Harry’s efforts to discomfit his solidly Remain voting family are both thought provoking and amusing. I’ll just pick out one example which was – from his interlocutors’ point of view – particularly galling. He is suddenly struck by the similarities between the arguments used by some Remainers and memories of his elderly Rhodesian uncle who had endlessly grumbled about the credulity of those who longed for independence, and the dire warnings they ignored (p. 120). The conversation raises questions about the circumstances in which we admit temporary hardships may be necessary in order to achieve a longer term goal – and those in which the hardships are invoked as a deal-breaking argument against change.

Here Chris Beckett explains the relationship between his own views, his own experience of Brexit, and the novel’s genesis.

I voted remain, and have always had a warm feeling for the whole European project, so I was very saddened by the referendum result, but I thought to myself, how would it be if instead of looking at all this as me living in an island of correctness in a sea of error, or an island of civilisation in a sea of barbarity, or an island of decency in a sea of intolerance, I was to look at it more in the way that, say, an outsider looks at the political geography of Belfast.

The story of Michelle and Harry is absorbing in its own right. However there is a further dimension to this novel which puts the Brexit debate into perspective.  Harry’s narrative has been reconstructed by a 23rd century archivist, Zoe, who finds it difficult to imagine why the issue of whether or not to leave the European Union seemed so momentous. From her point of view, writing from a world devastated by climate change. both Harry and Michelle seem astonishingly privileged, and her detached anthropological stance defamiliarises those all too familiar debates of 2016.  Here is just one of her reflections:

They could have been seen at the hospital completely free of charge – an extraordinary thing, of course, from our perspective, and pretty much unprecedented in human history – so that, unlike most parents these days [they] weren’t faced with the agonizing dilemma as to whether this was the moment to dip into the roll of yuan stowed under their bed, or whether they should hold their savings back for a still more serious emergency in the future. (p. 26)

As the reference to ‘yuan’ here suggests, this is a future in which China plays a prominent role. The precise relationship between the Chinese regime and the Brexit debates – as revealed by Zoe – is particularly intriguing and (to me) unexpected.

I should note at this point that Chris Beckett is a friend and former colleague. However my recommendation of this novel – if you are interested in the social and political debates outlined above, or simply in science fiction – is wholehearted and disinterested.