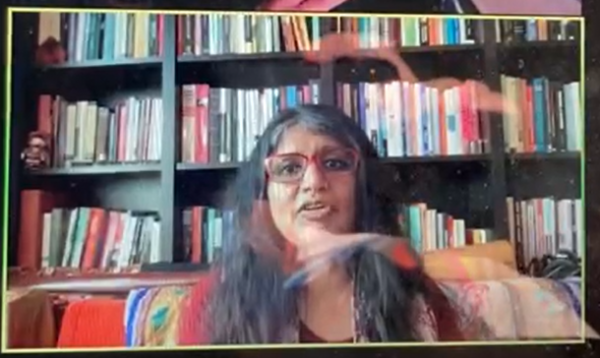 An associate Professor of Sociology at Warwick University claimed that the International Holocaust Remembrance Alliance (IHRA) definition of antisemitism was part of a Tory plot to “legitimate racist speech and de-legitimate anti-racist and anti-colonial research, teaching and activism”

Goldie Osuri, who was previously cleared by Warwick University of making an antisemitic statement in a different lecture, lambasted the IHRA definition, which has been adopted by her employer, at an event in April organised by the Universities and Colleges Union entitled Resisting the IHRA Working Definition of Antisemitism.

Harry’s Place has published a tape of Osuri’s shocking comments on Soundcloud so as to prove their veracity.

The Warwick University lecturer added that:

“Pressure to recognize or adopt the IHRA working definition with its examples should be understood as a racist move against Palestinians.”

“It is part of a broader gamut of Tory moves to legitimate racist speech and de-legitimate anti racist and anti colonial research, teaching and activism.”

Osuri claimed that she had been the victim of a “smear campaign” at Warwick university following a complaint made against her by the University’s Jewish Society after she said in a lecture:

Osuri called the complaint made against her a “deliberate misinterpretation”.

The context to this is a reactionary movement by some university academics to push back against a highly successful campaign by grassroots Jewish students to have a definition of antisemitism adopted by their institutions that represents the difficulties they face on campus.

This is in the hope that antisemitism might be more effectively addressed when it is reported to their universities.

A full transcript of Osuri’s comments has been published here:

Thank you Margo. My very warm thanks to the organizers of this event and for this much needed campaign against the IHRA so I will focus on three main points.

Secondly, should be understood as a way of smearing as antisemitic and hence silencing critics of Israel and pro Israel advocacy organizations and 3rd Lee, I think this is a really important point, it is part of a broader gamut of Tory moves to legitimate racist speech and de-legitimate anti racist and anti colonial research, teaching and activism.

Regarding the first point, the use of the IHRA with its examples, delegitimizes, long-term scholarly work on Israel as a settler colonial apartheid state because it is a way to aid and abet colonialism and apartheid of Palestinians through the chilling effect as mentioned earlier and delegitimizing, anti colonial and anti racist scholarship and speech and activism on Palestine.

So this point I think relates to the Third Point that I will make. But first I will talk about how the the campaign for the IHRA works by smearing as a strategy, ensuring that even if one is exercising lawful speech, they will be called antisemitic. So I want to make it clear here that I’m not a free speech, academic freedom libertarian, any form of racist or anti Semitic speech is of course unlawful.

So how does the smear strategy work? In November 2019 a vexatious complaint was made against me concerning a comment I made in class about the role of Pro Israel advocacy groups in the Labour Party. I did not refer to Jews as a collective controlling society or government, which is the IHRA example. In other words, I could not be deemed anti-Semitic even by the IHRA example, but of course there wasn’t the media campaign against me alongside the lodging of the complaint and the subsequent investigation. I was immediately deemed anti-Semitic by student societies, by Pro Israel organizations on social media. Tory ministers were immediately involved. They were invited to Warwick for example, these strategies were part of pressuring the university to adopt the IHRA. Since then, my name, my head of Department’s name, and the Warwick vice Chancellor’s name has been mentioned in UK Parliament sessions as examples of anti-Semitism at Warwick.

When in reality my speech was found to be lawful. In effect, a repetition of a deliberate misinterpretation. And a lie is a convenient way to conduct a smear campaign, and the point of the smear campaign is to render guilty those who are innocent. Having undergone a university investigation even before the recognition of the IHRA at Warwick, I want to say that the individualized disciplinary procedures of universities and their neoliberal concerns with brand names are not adequate to the task of protecting academics from the smear campaign.

The fact that I was under investigation was enough of a smear to be used on social media and in international media. I could not speak about the details because I was under investigation due to confidentiality reasons while the media campaigns continued. When the complaint was first released to the media, the university did not defend me. When the Times did a story in December 2020, the university said it could not comment on individual complaints. Universities are legally obliged to protect and promote academic freedom. However, they possibly feared defending staff accused of anti-Semitism or their own due process, is thus enabling the continuing smear campaign. Because of course, universities fear being called anti-Semitic. And that hurts their brand. I continue to be considered guilty. The December 2020 campus anti-Semitism report produced by the Community Security Trust featured me as an anti Semite and the University of Warwick as an example of bad practice in tackling anti-Semitism.

On April 27, Tory MP Jonathan Golers called for the sacking of myself, my head of department and even Warwick’s Vice Chancellor. Thus universities are being pressured to fire those smeared of anti-Semitism so that universities are being pressured to fire those smeared with the utter lack of regard not only for academic freedom, but for due process in investigations for employment law and for university autonomy. This trend of referring to academics hiding behind employment law and academic freedom is a dangerous one and effects all of us.

I have one more point, my last point relates to my first point regarding abetting racism against Palestinians. The IHRA campaign must be understood as part of a broader Tory agenda to shift the norms of free speech and academic freedom toward legitimating racist, Islamophobic, transphobic and transphobic speech and delegitimizing anti racist and anti colonial speech. The Tories are attempting to legitimize racist speech through the freedom of speech Universities bill introduced in January 2021. MP David Davis, who introduced the bill, referenced a libertarian understanding of free speech and spoke of the no platforming of Germaine Greer and Peter Tatchell. These speakers were on in fact allowed to speak. So that was a kind of lie.