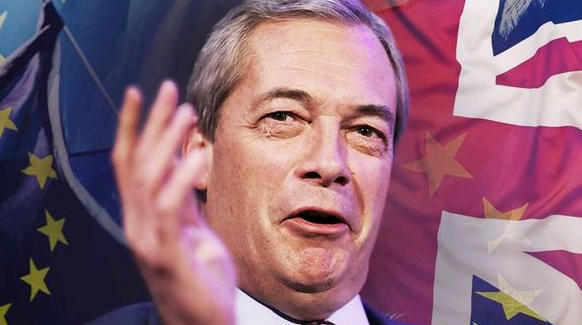 Love him or loathe him – just don’t ignore him.

The remainers are making the same mistake as the US Democrats (Hillary Clinton’s “basket of deplorables”) in that they see, and portray, Brexiteers as racists, fascists, nazis or general untermensch rather than trying to understand their concerns,

Brexit cuts across society, the stereotypical kipper as a retired army officer with a double-barrelled name and a gin and tonic was always fallacious, and the opinion polls, if correct, suggest that both the main parties are being battered.

To some extent they’ve only got themselves to blame. The fundamentalist leavers saw the glass as half empty, but had they concentrated on just getting out (which Jacob Rees-Mogg eventually realised) they wouldn’t have made space for the remainers with their sophistry of a “People’s Vote” which became a “Confirmatory Ballot/Referendum” and is intended to try and revoke Article 50. I’m not sure if they’ve thought what would happen if a second referendum reversed the 2016 decision by a similar margin – the Brexit Party riding high should be a warning to them!

It looks like Farage was ready and the Brexit Party could almost be described as a virtual party – although there is, and has to be, a physical office, it mostly exists in cyberspace. Supporters sign up online, receive email updates and the free delivery of parliamentary election material by Postman Pat only requires a centralised mail merge with an electronic version of the electoral roll.

Phasing the announcement of candidates extended the media coverage and their diverse range certainly can’t be described as male, pale and stale.

The short timescales are likely to reduce scrutiny – something the Conservatives might have benefited from in 2017! Although a passionate tub thumper, Claire Fox has unpleasant skeletons in the cupboard, and Farage is not without baggage, but the broadcasters aren’t really prepared and postal votes are arriving. The media coverage is being shoehorned into the “standard” weekly cycle and the many parties all have to be given air time, there are no prime time set pieces on BBC1, ITV, etc.

Theresa May tried to make the 2017 election about Brexit, but the overlong campaign, poor manifesto and Corbyn being given a platform meant that it wasn’t – this time Brexit does mean Brexit!

Beyond the EU elections the Brexit Party has to become a nationwide campaigning organisation as a General Election before 2022 cannot be ruled out and, assuming an even spread of registered supporters, could be approaching 150 per constituency.

Contesting all 650 constituencies requires a deposit of £325,000, plus the cost of printing literature. There does appear to be a cunning plan as applicants for parliamentary seats have to pay a non-refundable fee of £100 for administration, background checks, etc and, if selected, to put in place a campaigning infrastructure.

There may be sufficient people but it takes time to build up canvas data on an area and then there is the problem of filtering out, or not!, undesirables. The rapid rise of UKIP in the early 2010s and Labour under Corbyn overloaded the systems and was a gift to those who trawl through social media – although being a Marxist, Israel hating, antisemite now seems to be an essential prerequisite for membership of Corbyn’s Labour Party.

It currently looks like there will be a Brexitquake on the 23rd of May, possibly also on the 6th of June in Peterborough and should there be an election whilst Brexit is still uncertain Farage is likely to remain significant.

The lesson of UKIP, however, is that once the referendum had been won their support dropped off the edge of a cliff.