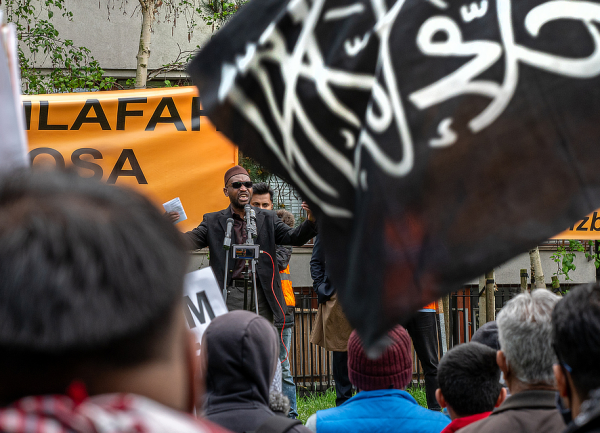 The great British poet Samuel Taylor Coleridge once remarked ‘The wise only possess ideas; the great part of mankind are possessed by them’. This is perhaps less true today than it was in the early part of the eighteen century when Coleridge was writing but it is certainly true of the seemingly resurgent Islamist group Hizb ut Tahrir. In the aftermath of heightened tensions in Israel-Palestine, the Hizb has been holding a series of street rallies across London to remind the masses of their distinct yet dull solution to every contemporary ailment, namely the establishment of an Islamic state.

The Hizb solution is simplistic to the point of being redundant, ‘Muslim armies, move’ their speakers scream whilst standing on a bench in Tower Hamlets reading from an iphone. It is difficult for passers-by not to think they just walked past the set of Four Lions part two, but they would be mistaken because the Hizb are deadly serious. They genuinely believe the solution to Israel-Palestine is an all-out regional war pitting the only nuclear power in the Middle East (backed by the US and UK) against a group of countries who are almost entirely dependent on Western powers for military hardware and training.

Putting aside their limited understanding of military strategy, the Hizb are not avid students of history either. They seem to ignore the fact that their solution has been tried and failed (quite spectacularly) in the past and that, in part, is the reason why Israel’s neighbours are not keen to repeat it. But such is the effect of ideological possession on the mind of the possessed that practical considerations must not be allowed to get in the way of the solace offered by ideological purity.

The greater tragedy, however, is the fact that the Hizb will never accept responsibility for the bloodshed and death that is caused when a small group of naïve people do embrace their empty slogans and act upon them. Thus, we find ourselves in a farcical situation in which those who are claiming to care about human suffering are doing all they can to cause more of the same. In other words, there is a price to be paid for promulgating hopeless remedies, yet the promulgators are never prepared to pick up the tab.

The Hizb are a curious bunch. They had very little to say when ISIS did indeed establish a political entity that reflected their vision, other than rejecting it without explaining why. They completely ignore the fact that there is no consensus amongst Muslims on the definition of an Islamic state, how to bring such an entity about nor the necessity for it. Furthermore, every time a state veers towards an Islamist model of governance it encounters unmitigated disaster and misery. One can’t help wondering why the allure remains for a small group of core adherents who do everything they can to avoid countries that embody their political vision whilst gravitating towards those that do not.

In my view, it is less about what they can do to bring about a utopian theocratic state from the relative comfort of London, rather what possessing such an idea can do for them. Allow me to elaborate. Grand narratives have always been attractive to those who seek simple solutions in a complex world, those not prepared to grapple with the ambiguities of theology and those not prepared to face the innumerable intricacies of history. This is because the grand narrative replaces the need for hard work by offering an easy way out, so easy in fact that it eventually becomes a lifestyle for middle class idealists seeking a hobby in their free time. The cost is so low yet the psychological reward for being an imagined global revolutionary during your lunch hour is so high.

As such, the Hizb will always exist as long as there is a yearning for struggle, a need to express frustration and a search for purpose and identity. The empty slogans and hopelessly simplistic solutions will find a home in the minds of those unwilling to accept the world as it is, always was and always will be. However, this does not mean that they should be ignored or dismissed outright. As Dostoevsky reminded us, there is no isolated sin and each man is at least partly guilty for another’s sin. We owe it to ourselves and our communities to stand up to the hateful and dangerous rhetoric of the Hizb. We should be challenging them in any way possible and at every opportunity, whilst trying to understand what it is about the human condition that renders some of us so vulnerable to ideological possession.

This article was slightly updated about 12 hours after publishing