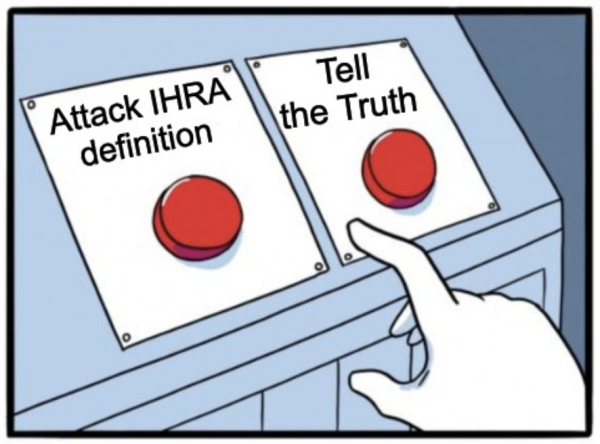 The Palestine Solidarity Campaign has released a Student Legal Support Guide. It claims that the guide has been produced by “with legal support from Bindmans LLP”.

It has a section on the International Holocaust Remembrance Alliance definition of antisemitism which includes this:

“it is important to remember that there is no known case of any university directly citing the IHRA definition to close down an event that is legitimately critical of Israel and is therefore not anti-Semitic in the proper sense of manifesting hatred, discrimination or prejudice, towards Jewish people as Jews.”

Not only does this prove the point that Pro Palestine events aren’t being shut down on campus it also shows that events that have been shut down on campus have been antisemitic thereby supporting the argument made by the Jewish community that it is both necessary and respectful of free speech.

The guide was released on the 7th of January and includes a “case study” from Warwick university where they appear to  praise them for not adopting the IHRA definition. Embarrassingly for the PSC the definition was adopted by Warwick University in October of last year:

The legal guide has the following disclaimer in it:

“While we have endeavoured to ensure everything in this guide is up-to-date, the law does change regularly. When in doubt, please be in touch before relying on this content in any engagement with others.”

While the law may change history doesn’t. Seeing as how Warwick University adopted the IHRA definition two months before PSC even released their legal guide one hopes they will edit the guide to reflect reality and do so by removing IHRA from it entirely.

That they think it’s their business to pass judgment on what is and what is not hatred against Jews shows just how entitled and privileged this movement is.

Warwick University placed a Jewish student under investigation after he reported a member of staff at Warwick to the university over her discourse.