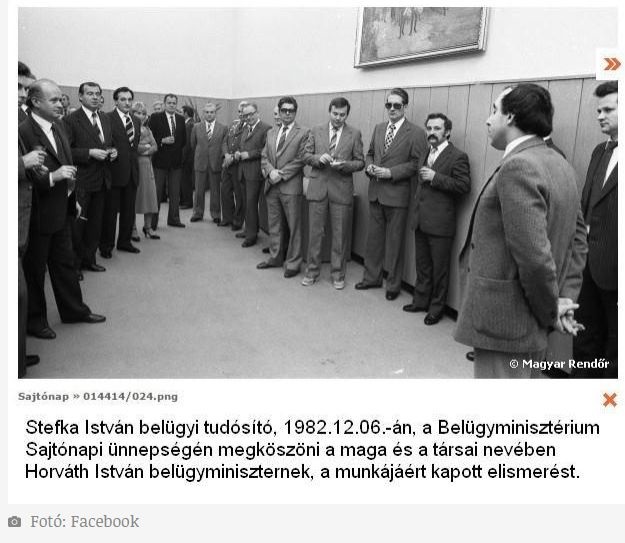 One of the unpleasant duties of a journalist covering Hungarian affairs is to review pro-government newspapers. This is not an edifying task.

Nowadays many of them refer to the “Jewish World Conspiracy” allegedly inspired by George Soros. A few days ago, I picked up the weekly “Pesti srácok” and was surprised to find an article by its editor István Stefka.

Stefka (77) was not only a former member of the ruling Communist party but he was also one of the few journalists to receive an award from the Interior Ministry. (See above.)

After communism Stefka found his way to the right and to Viktor Orbán. Now as editor of the pro-Fidesz rag “Pesti srácok” he published an article on July 27, 2020, about his friend Péter Szentmihályi Szabó, who was, like Stefka during the Kádár period, an ardent Communist:

Szentmihályi Szabó was discredited disastrously in 2014, after it became known that the erudite, humanist writer was nominated as ambassador in Rome. A slanderous campaign without precedent started against him. He resigned and died shortly after…. It was a natural idea of the foreign ministry and of course of Viktor Orbán, that those should be the ambassadors of the country, who do not work against Hungary, but represent honorably their country.

However the left liberal media hyena – with the help of left liberal political groups and the foreign anti-Hungarian business-political circles – vilified the candidate.

The plan was to discredit former ambassador Szabó; he was exposed as an anti-Semite and he died shortly after the negative publicity.

At Hungarian Spectrum, Eva Balogh described Szentmihályi Szabó as a “raging” and “inveterate” anti-Semite. She quoted an article written by him in 2000, when Fidesz was in government, in the far-right Magyar Forum, called “The Agents of Satan,” which, although it does not specifically use the term “Jew,” clearly describes Jews in classic anti-Semitic terms similar to those used in Nazi propaganda.  Balogh’s translation follows:

I don’t know, I don’t understand why they hate us so much. They live here in Hungary, they speak and write in Hungarian, but they loathe us. I really don’t understand why they stay if it is that bad here, in this welcoming country that is so foolishly patient. It is not difficult to recognize them because they are cowardly and impertinent at the same time. Money is their God, their mother tongue in which they have trusted from time immemorial. Dark circles under their eyes, flabby skin, clammy palms, cold feet, freakish smiles give them away. They can be found everywhere on the earth. They are the agents of Satan. They arouse fear and they live off of fear. They create turmoil and discord. They are constantly packing, yet they don’t leave. Are they foreign spirits whose mission is to destroy the local communities? International criminals who, following Marx and Lenin, decided to enslave mankind? Eternally homeless folk condemned to be constant wanderers? They are the debt collectors. The ones who first figured out that money “works” without labor although there are no goods behind the merchandise, only a piece of metal, a piece of paper, or by now only a digital symbol on the computer….

Pharisees, hypocrites, agents of Satan. They are in every party, in every church, in every community. They are ready for every betrayal because they are empty. They have no God, no nation, no people, no homeland, no Weltanschauung, only bank accounts. They don’t even have families, only temporarily. Their families are replaceable. They use everything, but nothing is theirs. And they clearly realize that. I am listening to the naive official statements about the forthcoming law on Hungarians living in the neighboring countries. One can hear the mistaken centuries-old notion being repeated: “a Hungarian is one who considers himself to be a Hungarian.” Oh, my Lord, any member of any reasonably cultured nation would have a hearty laugh hearing this! Is someone who calls himself an Englishman, a Frenchman, a German, an American actually an Englishman, a Frenchman, a German or an American? ….

After publication of this story abroad, Szentmihályi Szabó  was unable to take up his appointment in Rome.

Covid-19 is a new infectious disease however the decades old virus known as the “Jewish World Conspiracy” continues to multiply in Hungary. The ruling party and its leaders appear to have little or no resistance. This sickness or delusion was flawlessly expressed by Tamás Fricz, political scientist and Counsellor at the Hungarian Center for Fundamental Rights research institute. The government- sponsored center “considers preserving national identity, sovereignty and Christian social traditions as its mission.”

This article by Tamás Fricz appeared in the daily Magyar Nemzet, June 27, 2020.

…The role of informal networks was discovered to be indispensable in the case of Trianon [peace treaty with Hungary, 1920]. The influence of networks also became evident during the 1990s when an orchestrated attack began against Hungary.  A century ago, the objective was the disintegration of Hungary. Today’s choice is simplified in terms of full globalism versus departure from the European Union. The activities of the established political organizations are there for all to see but the informal networks wield influence from the shadows. Sometimes both the formal and informal policies can be observed, other times not. It would be good to recognize reality – that the EU is not a federal state but is an alliance of nations, some weak some strong, open to manipulation by globalists and shadow networks.

George Soros is a prominent member of the ‘super rich elite’ but there are even more important members of this club. In the previous European Parliament 224 MPs could be identified as members of his network; in the present Parliament this number might be even higher…. In the European Court of Human Rights 18 judges are thought to be connected to the Soros-network. The Facebook Control-Censorship Commission and the United Nations are also subject to this influence.

The power of this nihilistic under the radar network is immense and may be even more  dangerous than the activities of some political leaders, who in many cases have become little more than puppets on a string.  And this is very important: The Soros Network is in reality not just the Soros Network, it is itself part of a larger network of the global financial elite directed against nation states. The interests of Soros and the Rothschilds being complementary…

Meanwhile Hungarian government propaganda continues to assist the legitimizing of anti-Semitic attitudes in order to mobilize the supporters of hard rightwing politics. This is unforgivable.