In his 1970 book The Malay Dilemma, he described Jews as being “not merely hook-nosed, but understand[ing] money instinctively,” sentiments he repeated in a BBC interview last year, when he also questioned the number of Jews killed in the Holocaust.

The Cambridge Union’s decision to host him was greeted with great – and justifiable – concern by the UJS, BoD, and others. The interview more than lived down to expectations, and you can read a summary (by Daniel Kosky) of a whole string of disgraceful comments here.

The moment which has received most attention was this.

Appearing at the world’s oldest debating society on Sunday, Mahathir Mohamad, 93, said he had “many Jewish friends. They’re not like other Jews, that’s why they’re my friends”.

What made this particularly sickening was the audible laughter which greeted his sniggering, racist remarks.  Judging from the clip the laughter was pretty widespread and I heard no obvious sounds of disapproval from the audience.

Although I often disagree with Douglas Murray I had a not too dissimilar response to the one he describes in his recent article.

The critiques of this write themselves. Would any guest of the Cambridge Union have been so indulged if the above had been said about people of any other ethnic group? Or of any other minority? I would have thought not.

But that isn’t what is interesting. The interesting thing is that this happened (as with LSE in 2010) in the heart of an institution that is positively bursting with what used to be called ‘political correctness’ and has now become ‘wokeness’.

However I’m genuinely not sure whether those guffawing at blatant antisemitism were the same types who complained about, say, the appointment of Jordan Peterson. The distinctions between antisemitism on the far left and the right seem increasingly blurred.

Condemnation of Mohamad’s words has been widespread.  Miqdaad Versi of the MCB was I think making an implicit parallel with Trump’s appalling retweet of Katie Hopkins’ bigoted comments about Sadiq Khan here. 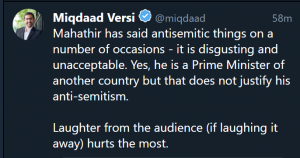 Finally, this seems a crucial point: 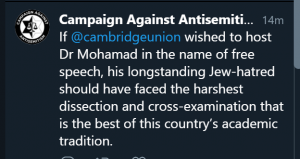