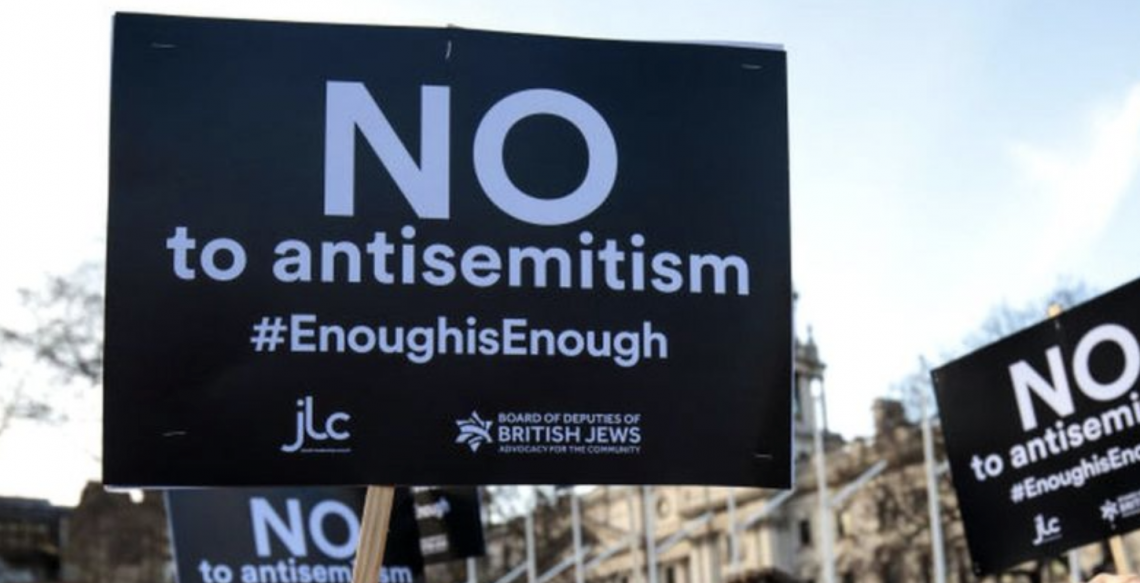 Until we understand that Israel is a stain on the world, a country born in original sin, unnatural, doomed to failure, conceived on top of another civilisation & guilty of everything from racism to ethnic cleansing to genocide to forced sterilisation and organ harvesting we’re never going to be able to deal with left wing antisemitism.

It really doesn’t matter how many settlements Israel is building or what the occupation looks like or what potential “solutions” there are. It’s really not about that.

Perhaps we’re spoiled and are too used to thinking that Jew hatred is something that those who espouse it are proud of, only too happy to raise their hands and scream that yes, they do hate Jews.

Even the Far Right are moving away from that – they’ve witnessed the success of the left wing model.

The left aren’t playing our game, in fact we’re playing theirs. We’re seeking their approval, their permission. We still see them as the arbiters of morality, they represent the people we overwhelmingly wish to vote for and therefore can’t bear the thought of being cast out of the movement by them.

A line in Batya Ungar-Sargon’s latest piece really hammers this home, she writes:

“As the protesters started to gather in the lobby, I approached them. I told them that I respected their passion and commitment to what they thought was right, but asked why they had picked this panel.

“Come to my panel tomorrow,” I said. “Come protest my comments on Zionism. I’ll be talking about the occupation. Bring your signs.”

I told them I’d reserve the first and second audience-questions for members of their group, but that protesting the all-Jewish anti-Semitism panel was undercutting their work.”

She’s actually offered pride of place to a bunch of people there to attack her, she’s thinking her logic works on them but they’ve got no reason to listen to her, they’re the ones who had the support not her.

Instead of fighting against the antisemitism their Opinion editor has experienced The Forward undermined her argument by publishing FOUR narratives contradicting hers to various degrees; “her account of what happened at the conference misrepresents the facts.” Says the conference organiser who adds; “To now find her accusing the conference of silencing her is deceptive and disingenuous.”

Another organiser wrote, also in The Forward:

“By choosing to leave, Ungar-Sargon opted to protest, instead of remaining in the conference to have difficult conversations. She opted for call-out culture instead of critical engagement. Walking out of a room might look good on social media, but this kind of self-de-platforming is not going to move the conversation forward.”

Being familiar with some of what Ungar-Sargon has commissioned in the past she’s probably happy The Forward published articles contradicting hers and giving the readers the chance to decide for themselves whether she’s right or wrong to claim antisemitism. But you can’t play around like this with racial hatred. Either she was a victim of antisemitism or she wasn’t.

Publishing accounts rubbishing her experience is tantamount to saying, nothing to see here folks, just another hysterical Jew dropping the A bomb in an attempt to shut down debate.

We won’t win this way.

Antisemites from the left claim to be anti-racist and yet they’re racist.

We don’t debate these people we offer evidence of their racism.

American Jews you’re slow to this fight, Jews are being pushed out of the anti-racism space.

The Forward thinks it’s nice to present a bunch of different views as to whether antisemitism really happens to their own Opinion Editor.

There aren’t any half measures here, they aren’t playing for the sake of playing, they’re playing to win and they’ll do whatever they have to to push Jews out of any space they find them.

We must do the same.