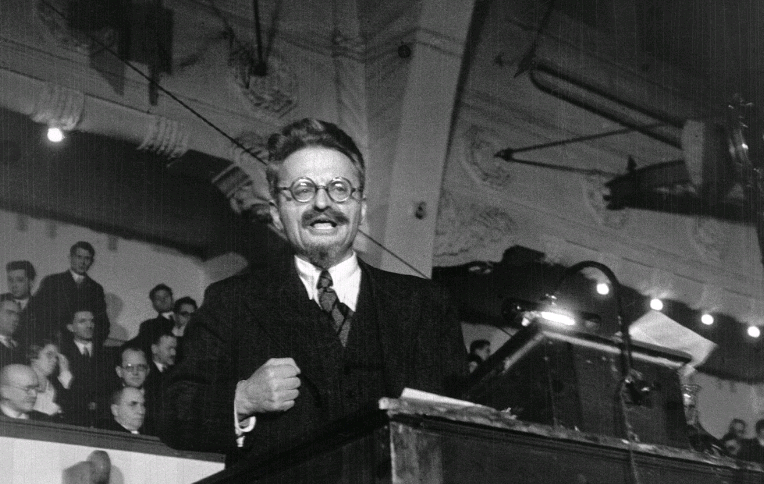 All his life Trotsky was a consistent fighter against antisemitism. – Joseph Nedava, Trotsky and the Jews, 1971.

Of course we can close our eyes to the facts and limit ourselves to vague generalities about the equality and brotherhood of all races. But an ostrich policy will not advance us a single step … All serious and honest observers bear witness to the existence of antisemitism, not only of the old and hereditary, but also of the new ‘Soviet’ variety. – Leon Trotsky, Thermidor and Antisemitism, 1937.

The rise of Nazism in Germany led the Russian revolutionary to a global revision of his approach to the Jewish question.  – Enzo Traverso, Marxists and the Jewish Question: The History of a Debate 1843-1943, 1994.

The dispersed Jews who would want to be reassembled in the same community will find a sufficiently extensive and rich spot under the sun. The same possibility will be opened for the Arabs, as for all other scattered nations. – Leon Trotsky, ‘Interview with Jewish correspondents in Mexico’, 1937.

The writings of Trotsky are a blast of clean air through the swamps of hysteria, ultra-left fantasy, vicarious Arab chauvinism, and – I think – elements of age-old antisemitism recycled as ‘anti-Zionism’ into which much of post-Trotsky Trotskyism has disintegrated on this question. – Sean Matgamna, 2001.[1]

The classical Marxist tradition of the late 19th and early 20th centuries believed that Jewish peoplehood, along with antisemitism, would inevitably dissolve in the solvent of the coming progressive universalism.[2] Specifically, it looked to the inevitable victory of an international proletarian revolution, and the advanced stage of human civilisation it would usher in, to solve what was called ‘the Jewish Question’ once and for all.[3]

But world history went another way and Jewish history went with it: a terrifying wave of anti-Jewish pogroms in Europe and the resulting rise of the Zionist movement, the defeat of the European socialist revolution, the degeneration of the Russian Revolution into Stalinism (and antisemitism), the rise of Fascism and Nazism, the closure of the world’s borders to the Jews, and the unprecedented radicalisation of antisemitism, culminating in the Shoah, an industrial-scale genocide in the very heart of European modernity. In place of history-as-progress, then, the Jews were faced with what the cultural critic Walter Benjamin – before he committed suicide himself, trapped at the French-Spanish border as he tried to outrun the advancing Nazis – called history-as-train-wreck.[4] As a result, many Jews turned to the Zionist movement to fashion their own escape from the wreckage: mass emigration and the eventual creation of a Jewish national home in Palestine in 1948.

More than any other Marxist, it was the Russian revolutionary leader Leon Trotsky who, in the years before his murder in 1940, broke from the unscrupulous optimism of Marxist orthodoxy on the Jewish question. This essay is about how and why he did so, the alternative approach he began to put in its place, and the relevance of that alternative for the Left today.

Isaac Deutscher, author of the classic three-volume biography, tells us that Trotsky ‘re-formulated his views on the Jewish problem’ before his death, while the scholar of antisemitism Robert Wistrich has praised Trotsky’s ‘important theoretical shift’.[5] For Werner Cohn, by the late 1930s Trotsky ‘saw how wrong he had been’ about the nature of antisemitism, and about the best way to tackle it.[6] The Italian Marxist Enzo Traverso has claimed that Trotsky’s late writings are ‘the most profound analysis of antisemitism that Marxist thought produced in the interwar period’ and that, despite their fragmentary character, what he calls Trotsky’s ‘global revision of his approach to the Jewish question’ amounted to nothing less than a ‘rich … but embryonic’ renewal of Marxism per se on antisemitism and the Jews.[7] Ernest Mandel, a Jew who survived the concentration camp in Dora in Germany to lead the mainstream of the Trotskyist movement for the next half century, has argued that the Left had not taken the measure of the ‘new approach to the Jewish question … less simplistic and less mechanical’ that Trotsky developed in response to the rise of the Nazis. Mandel believed that ‘[His] analysis of contemporary antisemitism and his recognition of the right of self-contained Jewish populations to a territorially and politically secure national existence constitute a coherent unity and a decisive step forwards in the Marxist attitude to the Jewish question’.[8] From the Right, Robert Service (in a unrelentingly hostile biography of Trotsky), insists that ‘on a single big topic he shifted his position … a homeland for Jews in the Middle East’.[9]

In the first part of the essay I explore what it was in orthodox Marxism’s approach to the Jewish Question that Trotsky revised, why he did so, and what his alternative was. I agree with Enzo Traverso about the limits of Trotsky’s late writings; they are indeed only ‘the outline of an alternative,’ best read as ‘a series of intuitions rather than a coherent and systematised conception’. It’s certainly up to us to do the work today. Still, as the Left is not exactly overrun with serious attempts to fathom antisemitism outside the ‘economistic limitations,’ it is surely wise to attend carefully to those attempts it does have.[10]

In part two I suggest a couple of reasons why Trotsky was able to change his mind on the Jewish question. First, the course of his life, punctuated as it was by fierce battles against antisemitism of several different kinds. Second, the cast of his Marxism, sceptical as it was of those economistic simplicities, alert to national specificities, and unusually sensitive to the looming danger of barbarism. What Traverso has called Trotsky’s ‘practical … nonsystematised’ Marxism, at odds with ‘any form of evolutionist and positivist Marxism’ surely helped make possible his global revision on the Jewish question.[11] In part three, I ask if Trotsky ended his life as a Zionist. I answer ‘no, but…’ and I claim that Isaac Deutscher developed Trotsky’s approach for the era of the Jewish state in ways still relevant to today’s Left. I conclude with a suggestion: knowing about Trotsky’s war against the antisemitisms of his day can help the Left understand and confront those it faces today, including the one within its ranks. READ MORE.