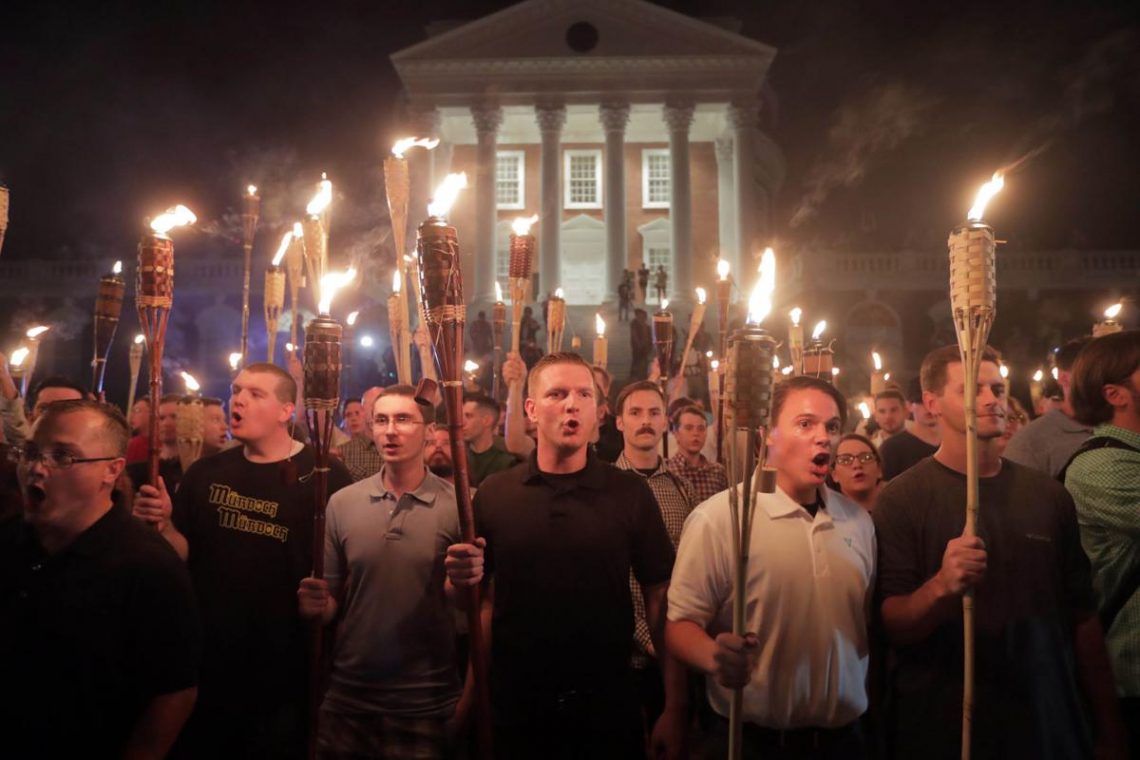 From an op-ed piece in Monday’s Roanoke (Virginia) Times:

Last month, federal agents in Maryland arrested a United States Coast Guard officer and said he was plotting to assassinate Democratic members of Congress, prominent television journalists and others. The officer, Lt. Christopher Hasson, apparently inspired by a right-wing Norwegian terrorist who slaughtered 77 people in 2011, stockpiled firearms and ammunition and researched locations around Washington to launch his attacks, according to investigators. Fortunately, the F.B.I. arrested him before he could act.

When news came of Hasson’s arrest, President Trump– who has no problems expressing the fiercest outrage at Democrats and even Republicans who oppose him– could only bring himself to call it “a shame” and a “very sad thing.” We don’t have to guess the difference in his reaction if, say, a Muslim had been arrested for plotting to assassinate Republicans.

This frightening case is just one of several recent reminders that white supremacy and far-right extremism are among the greatest domestic-security threats facing the United States.

In 2017, hate crimes, generally defined as criminal acts motivated by the victim’s race, ethnicity, religion, or gender, increased by about 17 percent nationally, to 7,175 from 6,121 (the number of police agencies reporting crimes also rose, by about 6 percent); in my state, Virginia, they were up by nearly 50 percent, to 202 from 137.

Killings committed by individuals and groups associated with far-right extremist groups have risen significantly. Seventy-one percent of the 387 “extremist related fatalities in the United States” from 2008 to 2017 were committed by members of far-right and white-supremacist groups, according the Anti-Defamation League’s Center on Extremism. Islamic extremists were responsible for 26 percent.

The rising scourge of domestic hate has been underscored by particularly heinous acts in the past few years. In 2015, an avowed white supremacist murdered nine black congregants at the Emanuel African Methodist Episcopal Church in Charleston, South Carolina. Last year in Kentucky, a white man with a history of making racist remarks was charged with shooting and killing two African-Americans in their 60s at a grocery store after trying to enter a nearby black church. Several months ago, an assailant shouting anti-Semitic slurs stormed the Tree of Life Synagogue in Pittsburgh with a semiautomatic rifle and murdered 11 people.

Virginia, too, has experienced extremist violence. In August 2017, several hundred people — mainly young white men heavily influenced by white-nationalist propaganda — converged on Charlottesville, ostensibly to protest the possible removal of Confederate monuments from public parks. Among other odious acts, these “Unite the Right” protesters marched with lighted torches on the campus of the University of Virginia. They chanted “Jews will not replace us!” before attacking a small group of students and counter-protesters at the base of a statue of Thomas Jefferson.

The following day, some of these Unite the Right enthusiasts attacked and injured counter-protesters in Charlottesville. Their violence culminated when a white supremacist from Ohio drove his car into a crowd of people, killing 32-year-old Heather Heyer and injuring about 30 others.

You may recall that Trump remarked afterwards— to the disgust of even many Republicans– that there “were very fine people on both sides.”

In 2009, Congress took an important step in arming federal investigators to deal with hate crimes by passing the Matthew Shepard and James Byrd, Jr., Hate Crimes Prevention Act. This law makes it possible to prosecute as hate crimes violent acts committed against victims because of their race, color, national origin, religion, gender, gender identity or disability. The law provides stringent maximum penalties, including life imprisonment, if someone is killed during a hate crime.

The Hate Crimes Prevention Act was approved by Congress and signed by then-President Obama despite the opposition of most Republicans in the House and Senate.

But the author of the op-ed believes the current law doesn’t go far enough.

Given these limitations, elected officials should consider providing law enforcement with additional tools. At the federal level, this could include a domestic-terrorism statute that would allow for the terrorism prosecution of people who commit acts of violence, threats and other criminal activities aimed at intimidating or coercing civilians.

The Trump administration has proposed no such law. After the Pittsburgh synagogue massacre in October, Democrats on the House Judiciary Committee called on the Republican chair to hold an emergency hearing on white supremacist- and antisemitic-inspired violence in the US. No such hearing was ever scheduled. One of the many good things about Democrats reclaiming a majority in the House in the 2018 elections is that perhaps such a hearing will finally be held.

What makes this op-ed remarkable is that it was written by Thomas Cullen, US Attorney for the Western District of Virginia, who was nominated to that position by President Trump in 2018, and who has no apparent political motive for exaggerating the threat posed by far-right extremism.