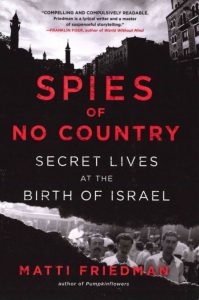 Journalist and author Matti Friedman talks to Fathom Deputy Editor Calev Ben-Dor about his acclaimed recent book, Spies of No Country which tells the little known story of the origins of Israeli intelligence by following four of Israel’s first spies through the 1948 War of Independence. He also discusses the importance of the ‘Mizrachi’ component in Israel’s identity, arguing that without grasping its centrality, neither Israelis, Westerners nor those in the Arab world can properly understand the country. Download a PDF version here.

Calev Ben-Dor (CB-D): Your new book Spies of No Country tells the story of four young Jewish men from the Arab world who form the beginnings of Israel’s spy network. What drove you to focus on this?

Matti Friedman (MF): The book follows four of Israel’s first spies through the 1948 War of Independence. The main characters are young men on the margins of the Zionist project who are recruited by a small, ad-hoc intelligence outfit within the Palmach called the Arab Section, which encourages Arabic-speaking Jews to cross enemy lines and gather intelligence in the Arab world. They actually don’t call themselves agents, but Mistarvim, which means ‘ones who become like Arabs’ and it’s a term used today, made famous by the TV hit Fauda. At its height at the onset of the war, the section was no more than 20 agents, only half of whom survive. Their mission expanded to attempted assassinations of Arab leaders, and in Haifa they carried out a pre-emptive attack on a garage where the Arab militia was preparing a car bomb in the spring of 1948. And then when Haifa fell to the Haganah in 1948 and the Arabs begun to flee, the people in charge of the Arab Section realised that they have an opportunity to insert their agents into the Arab world by disguising them as refugees. They ran away to Lebanon and spent the first two years of Israel’s existence as Palestinian refugees, so the way they experienced the birth of the state is radically different to most of the stories people have heard about at that time.

For many years, I have had the feeling that the stories we tell about Israel no longer explain the country; nor are they useful as a map for navigating the country in 2019. Israel has always told its story in a very European way, about socialism, Theodor Herzl, the Holocaust, the Kibbutzim. That is very important if you want to understand how the country was founded, but it doesn’t explain the society that we live in. So I was looking for other stories that would explain the state of now, particularly from the Middle Eastern perspective, which reflects the fact that half of Israelis today actually come from the Islamic world rather than from Europe. In 2011 I met a 90-year-old former spy, Isaac Shoshan, who lives in a small working class suburb of Tel Aviv with whom I had a series of fascinating conversations. Isaac told me a story about the founding of the state that I hadn’t heard before. He experienced 1948 as a Palestinian refugee, which was his job as part of the very small, embryonic intelligence outfit that as part of the Jewish military underground and that story struck me as worth telling. READ MORE.