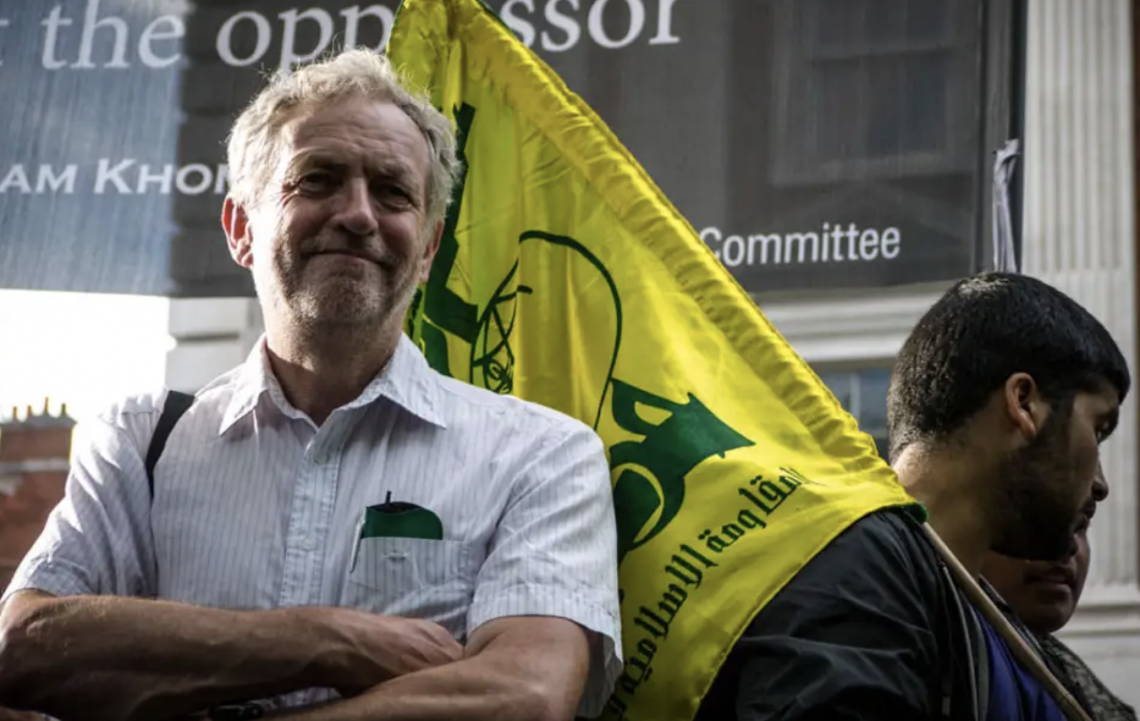 This is from Guido Fawkes:

Just hours after Labour chose to impose only a one-line whip on the vote on banning Hezbollah, meaning that Labour MPs – including Corbyn – are under no obligation to vote for the ban, a Labour spokesman has gone further and directly challenged Sajid Javid’s decision to ban it:

“The Home Secretary must therefore now demonstrate that this decision was taken in an objective and impartial way, and driven by clear and new evidence, not by his leadership ambitions.”

Hezbollah is already banned in its entirety – including the political wing – by numerous states and organisations from the United States to the Arab League. Even apart from their direct terrorist and military activities, Hezbollah are prolific spreaders of Holocaust denial and egregious anti-Semitic conspiracy theories and their ultimate goal remains the destruction of Israel. Hezbollah itself has mocked the supposed distinction between its military and political wings that its apologists like to promote in the West…

Corbyn once again shows why he is completely unsuitable to be Leader of the Opposition, let alone Prime Minister. Labour MPs who talked themselves into not quitting the party yet because of his second referendum pledge must be having serious second thoughts already…

Remember that moment Andrew Murray, chief of staff of Unite and Corbyn staff member, read out a speech from a senior Hezbollah commander while Corbyn, who also spoke at the rally, looked on?

From the Daily Mail:

Andrew Murray, chief of staff of the Unite union and one of the Mr Corbyn’s closest allies, came out openly in support of terrorists at a rally at which the Labour leader also spoke.

He took the stage to read out a message sent to him by Ali Fayyad, a Hezbollah terror chief.

The letter began, ‘Greetings to you from the freedom fighters of Hezbollah,’ and included an extended anti-British, anti-American and anti-Israeli rant that justified kidnap and violence.

Listen to the speech here:

Personally I find that there’s a galaxy sized irony in the fact that the man who stopped the UK (and by extension the USA) from bombing ISIS in Syria supposedly for fear for the lives of civilians, is now employing a man who sang the praises of a murderous terror group currently occupying swathes of Syria and engaged in the wholesale slaughter of the Syrian people.

But that’s just me.

This is Corbyn speaking in 2006 while Israel and Hezbollah were locked in combat and as good an example of any of how to respond to his bollocks as you’re likely to find (from a Labour politician to boot):

Everyone who has spoken in the House today has quite rightly condemned all the violence in the region and all the killing that is going on. The Minister himself has acknowledged that Israel’s actions in Lebanon are disproportionate and illegal, and are killing a large number of civilians. In view of Israel’s illegal activity, is he prepared to propose any kind of sanction against Israel, such as suspension of the EU trade agreement, which has within it a requirement in relation to human rights law and international law being adhered to? Will he also say the same to the United States? It has it within its power to put real pressure on Israel to cease this illegal activity.

No, this is not the time to start dusting off theories that I have heard over the past 30 years about how we can sort this problem out. We have to try to bring a cessation to the immediate violence and try to make people safe. Let us start negotiations from there