Respect to all the students who voted against a particularly ugly motion proposed at Cardiff University SU AGM. The Jewish Chronicle wrote:

The Union of Jewish Students and the Cardiff Jsoc have condemned a motion by the students’ union calling for a boycott of Israeli institutions while claiming to “protect… Jewish Students”.

The UJS and Jsoc said the motion, which will be debated at Cardiff University Students’ Union’s Annual General Meeting on Thursday, was “appalling” and deployed “a skin-deep mention of combatting antisemitism in an attempt to ‘kosher’ BDS”.

In a joint statement, the Jewish groups said it paid “merely lip service to antisemitism”, noting only four out of its 24 bullet points related to Jews.

The motion is titled “protecting our Palestinian and Jewish Students” and proposed by Amr Alwishah, the union’s vice president for welfare and campaigns, and seconded by Fadhila Al-Dhahouri, the president of the union.

It begins by saying “the rise of antisemitism is an extremely worrying threat” and then spends the next two pages criticising Israel, accusing it of a “system of occupation and colonialism”, and saying “Israeli universities play a key role in Israel’s crimes against the Palestinian people”.

“They are intimately involved with the Israeli state and its machinery, Israeli academic institutions are directly complicit in the state’s policies of apartheid, discrimination and colonialism,” the motion says.

Among its resolutions, the motion calls for the Students’ Union to “support students and academics that call for a boycott of Israeli academic institutions as a means to hold them accountable for the contribution that they make to Israeli violations of international law and to end international support for Israel’s colonial systems.”

It also includes a resolution to “endorse a zero tolerance policy to antisemitism”.

“In Cardiff, only a couple days ago we read about an antisemitic incident on a bus, and last week we heard disgraceful antisemitic comments from a member of the Welsh Assembly.”

They also noted the motion defined antisemitism using the definition Labour came up with earlier this year, which omitted examples of how criticising Israel can stray into antisemitism from the internationally recognised definition and triggered “huge uproar and hurt to the Jewish community”.

Their groups’ statement continued: “Anyone who believes that they can erase Jewish experience and define antisemitism better than Jewish people cannot claim to be ‘protecting Jewish students’.

“It is clear that this motion’s skin-deep mention of combatting antisemitism is being used as an attempt to ‘kosher’ BDS, a movement that the vast majority of Jewish students oppose and see as an attack on our identity.

“We will not accept our oppression being used to further the politics of division and hatred.”

Note the sentiment from inside the room regarding the motion:

I am the president of jsoc here! I had absolutely no idea about this until I read the AGM schedule. Don’t let outside affairs affect the safety and welfare of my friends and family. I am sat here at the moment already nervous about my safety! #CardiffAGM18

Thank fuck the motion was voted down. Blatently targeted and biased, with seemingly no support from Jewish students. #CardiffAGM18

Very relieved about the result of the motion. I can sleep easier tonight #CardiffAGM18

The proposer of the motion, Amr AlWishah, is scared of what the Jews will do to Al Aqsa: 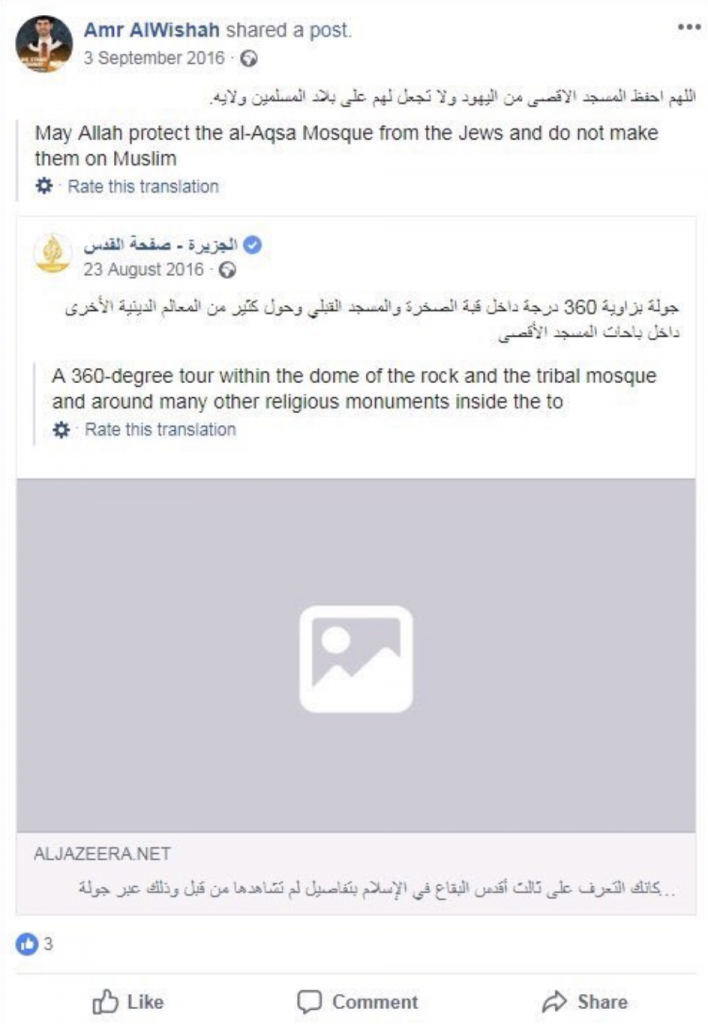 Then there’s this from Huda Ammori:

#BDS is asking for Palestinian human rights and international law to be respected by the Israeli state. It’s a peaceful non-violent movement which is rooted in anti-racism. Calling for the rights of one group doesn’t take away the rights of another. #CardiffAGM18

Funnily enough the head of the Palestine Solidarity Campaign Ben Jamal made a statement that he’d never even have someone with those views in the movement let alone in the office:

“We stand resolutely against antisemitism and I have no truck with anybody who says “well I have never encountered antisemitism within the Palestine Solidarity movement broadly” because I have and there are those at the fringes of our movement who wish to articulate the cause for Palestinian rights through anti-Semitic narratives, through engaging in nonsense about Holocaust denial, or engaging in conspiracies about Israel’s power that draw on anti-Semitic tropes and we need to be clear that there is no place for you within our movement.”