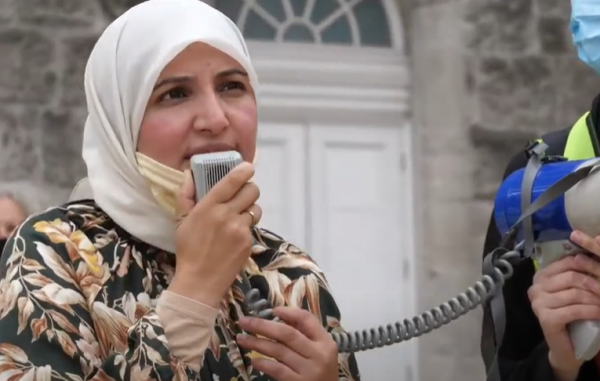 On the 28th November, the Labour Left Alliance held their final event marking Islamophobia Awareness Month. The event; “War and Islamophobia” featured Salma Yaqoob, former leader of the Respect party and Zubeda Begum, founder of the Daughters of Kashmir as the main speakers. Other prominent contributors were LLA leading light Tina Werkmann and Tony Greenstein. The discussion was punctuated by a series of arguably antisemitic and certainly conspiracist comments, mainly by Yaqoob.

She goes on to say:

“This thing about a uniquely antisemitic trend is simply not true. Even now people are trying to  make out that Muslims are uniquely antisemitic and it cannot be divorced from the issue of Israel. Suddenly in order to justify, to justify the kind of policies that right-wing Israel governments have pursued, now we are seeing more and more how all people are called antisemitic who it seems criticize Israel…..”

Israel it seems is never far from her thoughts:

“So there is a lot of sinister erasure going on, all actually very much to protect a privileged position of the Israeli government’s stances and the Israeli government’s regime to kind of make the “us” and “them”, the “them” being the Muslim other which then becomes the Palestinians. Palestinians are all characterised now as extremist Muslims, even if they happen to be Arab-Christians…..”

Mention is also made of a report written by the Reut Institute, an obscure Israeli think tank who wrote a report about BDS around 15 years ago:

“written almost 20 years ago now where strategies like this, about literally infiltrating student movements, academia, all political parties with a certain defence of right-wing governments, in that particular case the Israeli government by crushing alternative viewpoints and solidarity viewpoints of politics over there…”

Needless to say the actual Reut report didn’t call for any of those things. There’s also been sinister collusion afoot between the Israeli and Indian governments apparently:

“This is no accident, so the fact that there is an alliance between the right-wing Indian government and the BJP kind of activists and ideology and the Israeli government. And this attack on Labour, they’ve got the same playbook now. So what we’re seeing now is an Indian lobby which very much has the Israeli kind of government template now. And so what happened in the Labour party, we are now beginning to see that same aggressive mischaracterisation of solidarity politics. And so it wasn’t surprising to me when despite the fact that in the Labour party conference overwhelmingly a resolution on Kashmir just expressing solidarity was passed, suddenly Jeremy Corbyn is told that the Indian embassy will no longer want ties with him. There was huge amounts of pressure put on Keir Starmer, one of the first people he met alongside the JLM etc were the representatives of the Indian lobby…”

“The Modi government is fascist, they admire Hitler, they, you know, studied Hitler’s (sic), the way he behaved the same way they did this. What Israel has done now, the way they have done now, treated Palestine, the same thing Modi is doing to Kashmir, it’s the same steps they have taken…”

Birds of a feather flock together, Yaqoob lavishes praise on Tony Greenstein, expelled from Labour, Kicked off Twitter, lost a libel case against the Campaign Against Antisemitism when he sued them for calling him  a “notorious antisemite”:

“You have been personally vilified because of the solidarity stance you have taken, particularly, for Palestinians, your personal life, I know, would have been lot easier had you stayed silent…”

Greenstein hasn’t been vilified at all, his own comments are well known, for some they show him as a hero. For the rest of us as someone toxic.

This is the latest in a long running pattern of behaviour for Yaqoob. Her political background is in the Respect party, which was founded by George Galloway, another toxic individual, never shy of spreading conspiracist views and taking a dim view of the Israeli government. She became leader of the party in 2005 and having failed to be elected as an MP in the General Election that year,  she became a  councillor in Birmingham. After stepping down in 2011, she subsequently resigned from the party after falling out with Galloway. Last year she joined the Labour Party.

Yaqoob likes to paint herself as the perennial victim, especially as she is a true defender of anti-racism. At an online rally in support of Jeremy Corbyn on the 1st November, she said the following (47 mins in):

In many ways, Yaqoob sees herself as a fellow-traveller to Corbyn, who she has shared many platforms with and interviewed, brought down by evil forces precisely because of his stance on Israel. At that same online rally, she states that antisemitism allegations in the Labour party is a “witch hunt against anybody who has any, any tenuous link with standing up for the oppression of the Palestinians” and its been set up against those who “refuse to criminalize dissent against the Israeli government”.

This is the latest in a long running pattern of behaviour for Yaqoob. In 2013, she tweeted a fake news article about Iceland arresting 10 “Rothschild Bankers” regarding the indictment of executives at the Icelandic Bank Kaupthing as an example of financiers being punished after the 2008 crash. The Rothschild bank had nothing to do with Kaupthing the source of article was a far-right website. This is a classic antisemitic trope of greedy Jewish banks pulling the strings of the world and there she was pushing the conspiracy.

In May 2019, Yaqoob tweeted about Israel hosting the Eurovision contest: 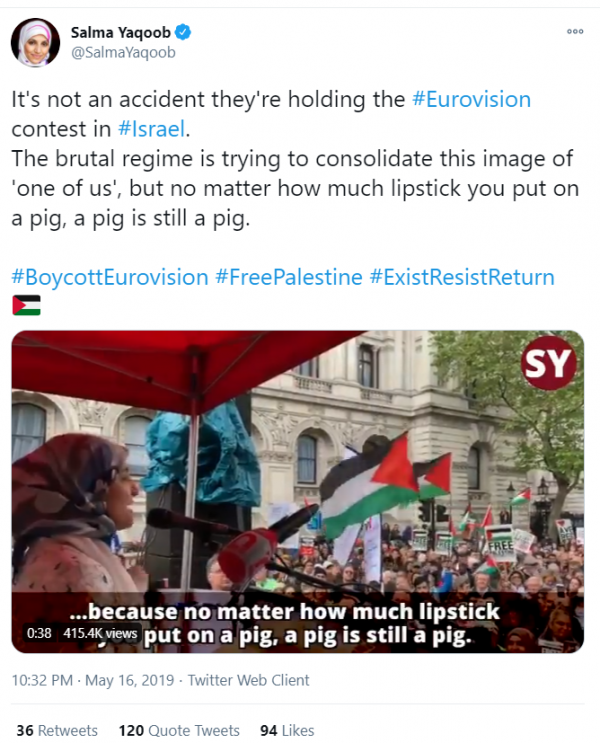 Last year, when Yaqoob was running to be the Labour party’s West Midlands mayoral candidate, she apologised for these comments saying:

“I’ve witnessed some individuals, under the cover of the Palestinian cause, stray into perpetuating antisemitic narratives, by sharing conspiracy theories about Israel or Zionism, which recycle historic tropes about Jewish people”

Of sharing fake news about Rothschild bankers she said:

“I would of course never deliberately promote such a website, or deliberately spread Islamophobic or antisemitic conspiracy theories. Whilst it was an honest error on my part, caused by carelessness not malice, in one tweet using a poor source, I understand the hurt caused by people spreading such tropes and sincerely apologise for that.”

“It is wrong to claim my use of this phrase meant I referred to Jews as pigs. In both Islam and Judaism pigs are considered ritually unclean. I assumed that because I, as a Muslim, was not offended by this phrase, that others wouldn’t be either. I should not have made such an assumption and I apologise for doing so.”

She also remarks that the “complex issues” of the Israel and Palestine “must be treated with sensitivity and understanding”. If Yaqoob is so contrite about her previous comments regarding Jews and Israel, then why is she making similar comments again? The Israeli government according to her is pulling the strings behind the antisemitism allegations in the Labour party and the perception of the Palestinian issue. She even adds to the conspiracy with the claim that the Israeli and Indian governments have come together in some kind of vague, nefarious conspiracy. In this case the Israelis have provided them with a lobby “template” on how to control the perception of their policies in Kashmir.

What does that even mean?

And why has Yaqoob chosen to air these at a Labour Left Alliance meeting?

The LLA furiously oppose the antisemitism allegations in the Labour party and have become a kind of safe harbour for those expelled or suspended from the party precisely because of antisemitism. This is the group where Werkmann described in an online meeting the number of antisemitism cases in the party as “miniscule” .

It’s interesting that now Yaqoob isn’t eyeing up the role of Mayor the discourse she became well known for is all spewing forth once more.