This is a special by Lee Kern

For the past three years Jeremy Corbyn, leader of the British Labour Party, has been embroiled in an antisemitism scandal.

As a defence against these charges – Jeremy has frequently invoked the actions and values of his family as evidence of his stance on antisemitism – particularly his mother’s alleged participation at the Battle of Cable Street – a stand off between fascists and British Jews who were assisted by Irish residents and trade unionists.

With this in mind we are invited by Jeremy to look at the actions of other family members – including his brother Piers Corbyn – a strong advocate for a Labour government under a Jeremy Corbyn leadership and someone whom Jeremy has previously said he fundamentally agrees with.

By this metric – which Jeremy himself has initiated – it doesn’t look good.

This article will show that despite self-identifying as being an anti-racist on the Labour left, Piers Corbyn:

This October I highlighted a tweet sent by Piers that asserted antisemitic ideas of Jewish financial control of the world, that these Jews are the new Nazis and that they brainwash humanity.

Hey everyone – if you’re going on the People’s March today just letting you know Jeremy Corbyn’s brother thinks you’re puppets of some bankers who happen to be Jewish and that they are the heirs of the Nazis trying to establish a “4thReich” https://t.co/7oKUaeV8Tz

The next day I highlighted a second tweet from Piers that referenced thirty pieces of silver and a Judas style betrayal in relation to a Jewish politician:

It was at this point Piers Corbyn sent me the following legal sounding threat: 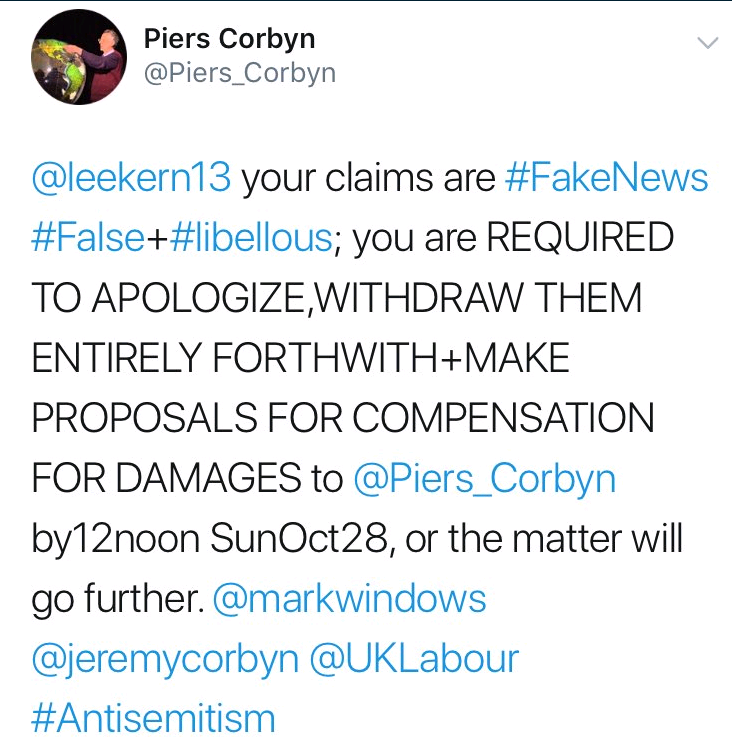 Putting aside the fact he shows a lack of insight into how British law works – and that the caps lock button on his computer appears to be broken – the threat was an attempt to intimidate and bully me into silence and stop anti-racists from highlighting antisemitism.

I think I have accurately characterised your rhetoric @Piers_Corbyn and would welcome the public scrutiny of your views. Sunlight is the best disinfectant. I understand you’re a climate change denier so I imagine you’ve something incredible to say about sunlight too… pic.twitter.com/a3BiGkwlXw

The arbitrary noon deadline Piers set me has since passed and I’ve heard nothing from him. So let’s cast some sunlight on the antisemitic, alt-right-esque and neo-Nazi-style rhetoric frequently employed by Jeremy’s brother.

Piers Corbyn ceaselessly promotes conspiracy theories about “Soros” and “Globalists” – antisemitic conspiracies that have their origins on the neo-Nazi far right:

His social media was littered with the same kind of rants about Soros and Globalists that Piers Corbyn constantly hashtags: 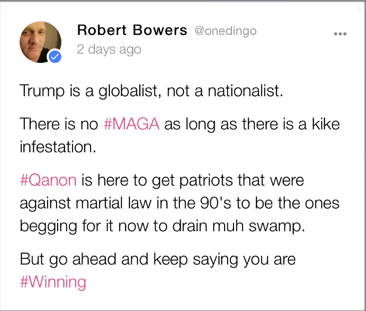 The Anti-Defamation League have resources that go into detail on these antisemitic tropes about Jewish financiers controlling the world for anyone who wishes to learn more.

Is there a direct line between Piers Corbyn and the Jew-killing Robert Bowers? No. I’m sure they’ve never been aware of each other’s existence.

But is Piers part of a global problem that helps keep alive the kind of antisemitic rhetoric that inspired Bowers? Absolutely. 100%

It doesn’t matter whether you are on the left, on the right, whether you are a David Icke style conspiracy theorist, a Christian antisemite, an Islamist or a regular person who has generic antisemitic attitudes: these Jew-phobic ideas all overlap, intersect, buttress and reinforce each other.

I really don’t care whether the antisemitism goes into my left ear or my right – it all sounds the same to me.

Whether he is consciously aware of it or not – the ideas of the far right evidently hold a strong appeal for Piers as he frequently spreads their propaganda to his 15,000 followers – including his brother Jeremy.

In the past he has been reported as retweeting a Muslim-baiting AND Jewish banking conspiracy tweet from an ex member of the far right BNP: 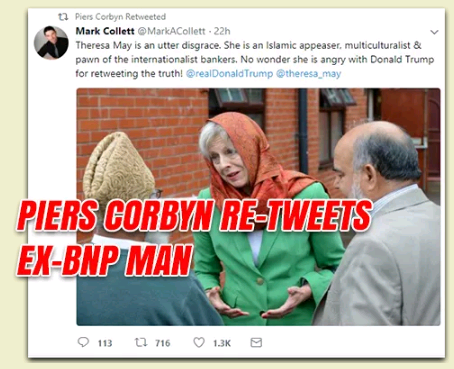 He has also retweeted a white supremacist who is literally called “WhiteKnight”: 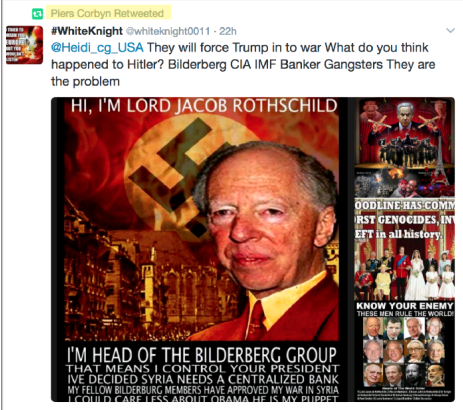 From the Rothschild conspiracy to the depiction of a Jewish politician as a puppet-master orchestrating disasters with a Star of David on his head – this is Hitler and Goebbels level antisemitism: 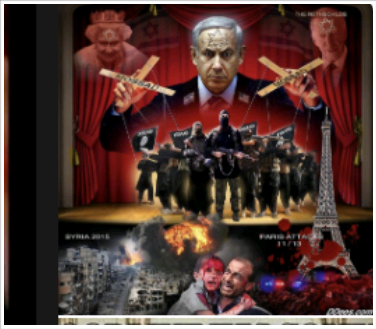 Any anti-racist would be able to spot this as easily as if they saw say – a giant mural on a wall depicting hook-nosed Jewish bankers. You know? Like the one that Jeremy Corbyn failed to identify as antisemitic and in fact praised on Facebook (see HP’s more nuanced take on the mural here): 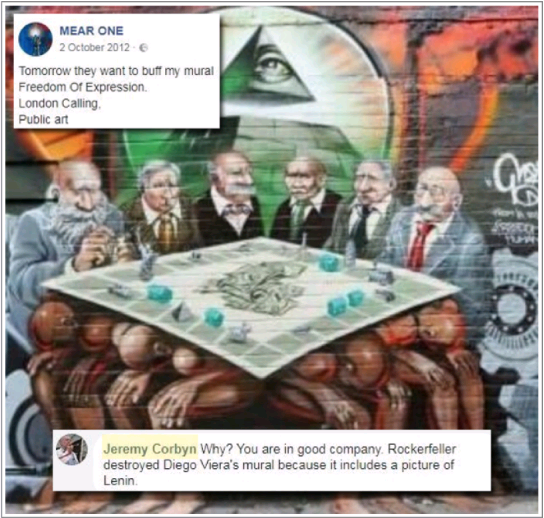 Whilst Piers wouldn’t self-identify as being far right or an antisemite – and he would protest the labels in good faith – there’s a pattern revealing he is unconsciously  infatuated and seduced by the racist rhetoric of neo-Nazis.

We might say the same about Jeremy Corbyn – substituting rhetoric with Nazi style imagery.

In both these instances they can brand themselves as leftists – but Nazi imagery was instantly appealing to them – so much so that Piers wanted to share it with his followers and Jeremy wanted to publicly praise it.

When the Jewish MP Louise Ellman spoke out against the antisemitism infesting Britain’s Labour Party, the response from Piers was antisemitic in a number of ways:

Firstly, he irrelevantly and antisemitically dragged in Israel-Palestine.

Coupled with this is an instantaneous knee-jerk reaction to antisemitically regard a Jew’s words as dishonest, untrustworthy and concealing an ulterior motive.

Then we see the same treatment that Jewish politician Bernie Sanders received – to be characterised as some kind of traitor. In this instance the British Jewish MP is branded a Zionist. There’s nothing wrong with being Zionist – after all it’s the emancipation and indigenous rights movement of the Jewish People. But the implication is that she puts another country before her own – that she is a filth column traitor. And she was damned with this accusation of treachery simply for being a Jew speaking out against racism targeting her Jewishness.

Pressed for a response on this antisemitic tweet Jeremy Corbyn stated to the Sun Newspaper:

“No my brother isn’t wrong. My brother has his point of view, I have mine. We actually fundamentally agree”

Before we conclude let’s return to the threat Piers made against me. We can see he deliberately copied in a man called Mark Windows: 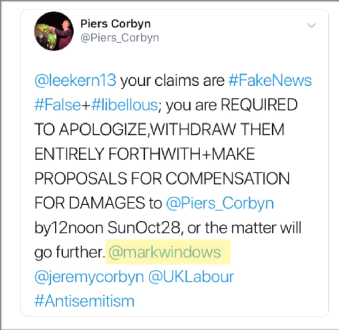 Mark is a friend and colleague of Piers. They frequently appear together on Mark’s online “show” where they agree and reinforce each other’s conspiracy theories: 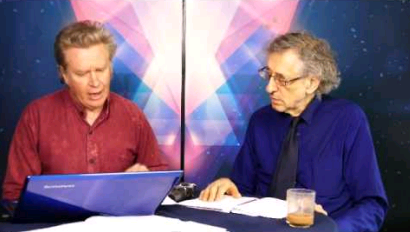 For an idea of who Mark Windows is let’s look at a post he recently retweeted – one that explicitly champions Nazi-style scientific racism against Jews: 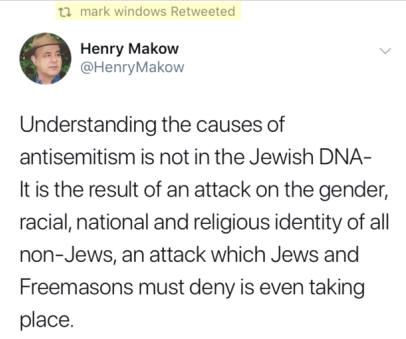 It claims that Jewish DNA prevents them from understanding antisemitism. Then, in a huge cocktail of victim-blaming and racial slander, it accuses Jews of being responsible for racist abuse targeted at them – and asserts that they are engaged in a war against all non-Jews.

There’s no way to dress this up – these are the same ideas Adolf Hitler had in Mein Kampf and which provided the racist foundation of the Holocaust.

This is the man who Piers Corbyn has found common ground with and who he copied into a tweet threatening legal action against me for highlighting antisemitism.

Here he is using a racist slur employed by neo-Nazis to imply Jewish control of the media, referring to the New York Times as the Jew York Times: 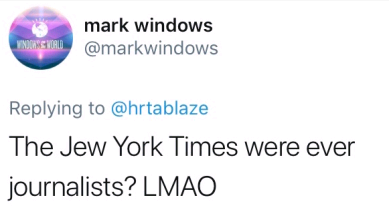 This is the man who Piers Corbyn continues to work with and finds common ground with – a racist bully who perpetuates the same antisemitic motifs used by the Nazis of last century and the Nazis of today.

This is the man who, as we speak, is copying me into tweets in order to goad and victimise me, claiming there is no antisemitism. Tweets which are being retweeted by Piers Corbyn: 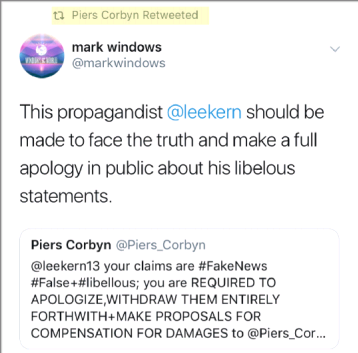 And let’s be clear: the overarching antisemitic themes shared by Mark echo the template of Jewish malevolence, control, deceit and manipulation that is to be found in the tweets Piers has personally written and retweeted.

These are the men trying to silence a Jew from speaking out against antisemitism.

Even though prone to conspiracies and hashtag heavy in his tweets – it is wrong to dismiss people such as Piers as just a crank. His online behaviour is not a frivolous joke. Ideas matter. When  Robert Bowers gunned down the Jews of Pittsburgh he did it with an idea in his head – a “globalist” idea that Piers Corbyn helps propagate – one of many antisemitic ideas he helps propagate.

Jeremy Corbyn has frequently declared he will fight antisemitism wherever it exists and whoever it comes from.

I could make a pointless demand that Jeremy Corbyn should condemn his brother’s antisemitic rhetoric.

I could say that if Piers is a member of the Labour Party they must remove his membership.

However, we know there’s no point.

Jeremy Corbyn and the Labour Party are three years past the point of redemption when it comes to dealing with antisemitism.

At the time of writing this, the police are investigating criminal acts of antisemitism that the Labour Party failed to deal with or pass on to the police themselves.

Jeremy Corbyn himself has said he agrees with at least one of his brother’s antisemitic tweets. Add to this the fact that he’s a man who has spent his career supporting and championing terrorist groups whose explicit goal is to exterminate Jews; who laid a wreathe at the site of Black September terrorists who orchestrated the castration and murder of Jews at the Munich Olympics; who praises art depicting hook-nosed Jewish bankers controlling the world; who celebrates Raed Salah – a man who calls Jews germs and invokes the blood libel against them; who bullies British Jews by implying that even though they’re born here they aren’t truly English; who speaks passionately at Hezbollah rallies – an Islamist terror group whose flag features a machine gun and who call for the murder of Jews around the world; and who has donated money to known holocaust deniers.

So it is now simply up to civil society to shame the Corbyn Project and reject the institutionally racist Labour party.

It’s time to be clear that anyone who supports Labour in it’s current guise is complicit in normalising and mainstreaming racism.

I say this as a man who voted Labour his entire life but cannot whilst the Corbyn project rots the party – a far left movement that has the politics of antisemitism at the core of it’s DNA.

The shame is entirely on those who’ve enabled this.

We can also pressure Twitter to look at the accounts of Piers Corbyn and Mark Windows.

Right now Louis Farrakhan’s account remains active, even though he has used it to describe Jews as “termites”.

But again, it is up to civil society to get on with the grim task of exposing and shaming antisemitism wherever it exists and whoever allows it to breathe unchecked.

Because antisemitic ideas like those shared by neo-Nazis, white supremacists, the alt-right, the Far Left, Louis Farrakhan and conspiracy theorists lead to antisemitic actions.

Jeremy Corbyn has invited us to look to his family for proof of where he stands on antisemitism.

We now have proof of where his brother stands.

Perhaps we should ask for proof of whose side Jeremy’s mother was on when he claims she was at Cable Street.