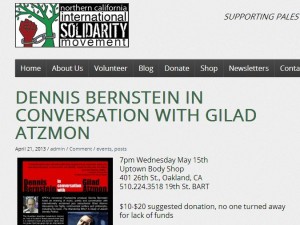 Gilad Atzmon claims that Fagin and Shylock accurately represent Jewish identity, the credit crunch was caused by the Jews, the Holocaust is a religion, and Hitler may be proved right about the Jews. He argues  the Jewish lobby in Germany provoked the Nazis into fighting back. At a recent jazz show, he “joked” that throwing the Jews into the sea, would be unfair on the sea.