Look again at the defence of Gilad Atzmon published by Messrs. Mearsheimer and Walt.

Atzmon illustrated the piece with this photo: 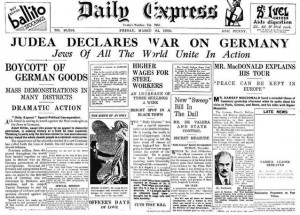 Atzmon writes in the piece:

Jewish lobbies certainly do not hold back when it comes to pressuring states, world leaders and even super powers. AIPAC’s behavior last week reminded me of the Jewish declaration of war against Nazi Germany in 1933.

I obviously do not think that Obama has anything in common with Hitler. There is not much the two leaders share in terms of their philosophy, their attitude to humanism or their view of world peace.(Unlike President Obama who postponed his Far East trip just to meet Israeli PM and sent his Secretary of State to appease his Jewish opponents promising more confrontation with Iran, Hitler actually reacted furiously to Jewish pressure.) However, it is hard to turn a blind eye to the similarity between AIPAC’s behaviour last week and the Jewish American Congress’ conduct in 1933.

Here is Mearsheimer’s view on this argument, posted on Walt’s blog:

Goldberg refers to a blog post that Atzmon wrote on March 25, 2010, written in response to news at the time that AIPAC had “decided to mount pressure” on President Obama. After describing what was happening with Obama, Atzmon notes that this kind of behavior is hardly unprecedented. In his words, “Jewish lobbies certainly do not hold back when it comes to pressuring states, world leaders and even superpowers.” There is no question that this statement is accurate and not even all that controversial; Tom Friedman said as much in the New York Times a couple of weeks ago.

In the second half of this post, Atzmon says that AIPAC’s behavior reminds him of the March 1933 Jewish boycott of German goods, which preceded Hitler’s decision on March 28, 1933 to boycott Jewish stores and goods. His basic point is that the Jewish boycott had negative consequences, which it did. In Atzmon’s narrative — and this is a very important theme in his book — Jews are not simply passive victims of other people’s actions. On the contrary, he believes Jews have considerable agency and their actions are not always wise. One can agree or disagree with his views about the wisdom of the Jewish boycott — and I happen to think he’s wrong about it — but he is not arguing that the Jews were “persecuting Hitler” and that this alleged “persecution” led to the Holocaust. In fact, he says nothing about the Holocaust in his post and he certainly does not justify in any way the murder of six million Jews.

This is beyond a defence of the Hitler-sympathising Atzmon.

The only thing they disagree about, with Atzmon, was whether the Jewish boycott had “wisdom”. Yet they support Atzmon’s argument – in reference to the anti-Hitler boycotts and AIPAC – that “Jewish lobbies certainly do not hold back when it comes to pressuring states, world leaders and even superpowers.”

Mearsheimer and Walt are using their positions to push Atzmon’s antisemitic arguments about Jewish power.