Earlier this week we had the No To AV campaign TV ad launch. Now it is the the turn of the Yes to Fairer Votes campaign with its TV ad. Oh dear. Is it bad? No not at all. It is workman like. The best you could do with what you have in terms of ideas. And there in lies the central problem of the Yes campaign. The ad like the campaign itself is an emperor’s new clothes of political ideas that peddles fantasy middle class politics promising so much, but delivering absolutely nothing.

One of the Yes campaign’s big arguments in favour of AV is that it will make MPs more accountable. I still don’t understand how this will happen and I get the impression from pr0-AV people that really they’d rather not go into too much detail as it is not an argument that stands up too much prodding.

But then they have also been pushing the idea that in their latest leaflet that AV won’t help the BNP (as the No campaign argues), but will in fact hurt them. Sounds good. What right thinking sort wouldn’t want to take down the BNP? The truth is that it will do no such thing. It is another piece of fantasy politics. According to Channel 4’s Fact Check blog quoting Institute for Public Policy Research “BNP voters couldn’t have changed the result of any seat [in the last election]”. That’s right not one, but they’ve launched a scary fists of a fascist leaflet. So you jolly well ought to be scared (although really for authenticity any right minded BNP supporter would have got a tattoo not used felt pen). 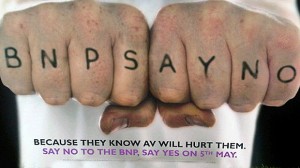 I digress, back to the TV ad. Some woman goes around with a megaphone saying that she’s hasn’t seen her MP for fives years. Apparently under first past the post he isn’t working for us all. Under AV the woman tells her MP he will have to work  harder and listen to us all. It is a ludicrous idea. Do people really think that their MP won’t work for them or address their concerns if they didn’t vote for them? Do you have to declare who you voted for when you write to your MP or visit his surgery? Of course not.

The truth is your MP will be no more responsive or unresponsive, they will work no harder or less harder, under AV than they will under first past the post. AV will not change the political structures of Westminster. Like expenses. We were promised reform, but we don’t seem to have got it. There isn’t any new oversight. There isn’t any magic political fix. Although I imagine you can buy your own megaphone.

AV simply means that you and I will help elect our second or third choice if our first choice does not get the required majority. Where is the extra accountability in that? It isn’t proportional, it isn’t real change, it is (repeat after me) a miserable compromise.  It is a political fantasy designed to appeal to middle class voters and nothing else.