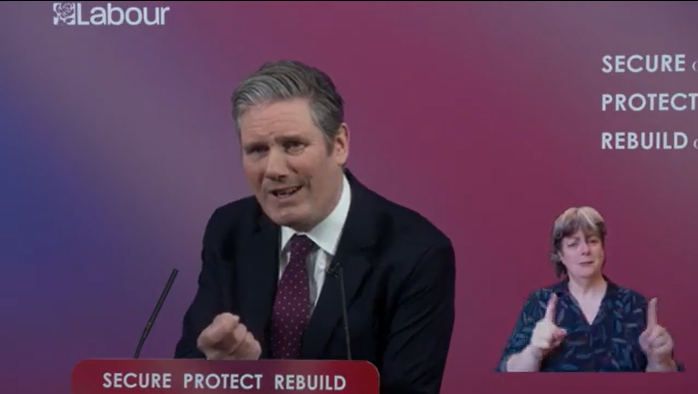 Starmer seems to be demonstrating the old adage that oppositions don’t win elections, governments lose them.

After a pretty torrid year in which the Conservatives repeatedly showed that they were adept at using their banana skin detector in order to step on them, it must be galling for Labour to see Johnson and his government with a poll lead averaging about 3-4% and Starmer third in a two horse race.

There is little doubt that this is due to the success in rolling out vaccines, the light at the end of the tunnel is getting closer. Unfortunately for the opposition the decision to go it alone with the Vaccines Taskforce and the appointment of Kate Bingham have been completely vindicated. The time available for planning was used well and the mess made by Brussels has been all over the media.

It’s also clear, possibly due to the behind-the-scenes changes at No. 10, that the government has learnt the art of expectation management. Hard pledges have been thin on the ground, it’s been stated that progress will be “lumpy and bumpy” and information about vaccine supply kept vague.

When the government says that it’s getting the vaccine out as fast as supplies permit there’s nothing for the opposition to get hold of and Starmer’s proposal to move some key workers, such as teachers, to a higher priority gained little traction, particularly when Drakeford didn’t endorse it.

The numbers of jabs is relentlessly rising – blink and there’s another million – and, as the supply increases, it may well hit a million per day.

Oppositions have only two ways of getting media coverage; being asked to comment on the government’s performance or policy announcements. At the moment only the second is really available, hence Starmer’s “big speech”.

I followed the BBC coverage, starting with Radio 4’s “Today” programme which is generally reckoned to be full of Grauniad reading lefties. Their attitude, like other broadcasters, towards Labour has shifted, challenging them about “calling for” things the government was already doing. The programme’s prime slots are 07-50 and 08-10; Starmer was “previewed” at about 06-45 and Dodds interviewed at about 07-15 with a brief extract included in the 08-00 News bulletin, but not as a headline item. Neither the 1pm nor the 6pm BBC TV News mentioned the speech in the headlines so someone would have had to watch the whole bulletin to learn about it.

The media are far from hostile but it looks like the honeymoon is over.

Local elections, including those originally scheduled for 2020 and outstanding by-elections, are approaching and the decision to keep them in May looks astute. Restrictions on leafleting and canvassing coupled with continued good publicity on vaccinations – there will soon be few who haven’t either had a jab or know someone that has – and a reducing lockdown could add to a feelgood factor which will help the government.

In 2017 the local elections were held when the May government was riding high and, based on Projected National Vote Share, resulted in an 11% lead. The Conservatives will be expecting losses but a, possibly increasing, poll lead should reduce that and also increase the pressure on Starmer. Local elections are political parties’ bread and butter and councillors their backbone. Although he would probably survive, a challenge to his leadership would be an unwelcome distraction.

Hodges contends that Starmer ”banked on Britain blaming Boris for his failure to prepare for the pandemic. Yet the nation has broadly come to view the crisis as a once-in-a-lifetime event beyond the Government’s control“, and the opinion polls seem to support that.

You only have to win the last battle to win a war.

There will be inquiries but whether these result in a knockout blow is uncertain, the conclusion could well be that the government got some things right and some wrong. 1992’s Black Wednesday was clearly the result of government policy, albeit predating Major, and the incumbent carried the can.

Although Starmer should be ready for inquiries, the recovery, and a new set of potential pitfalls, will be first.

Starmer will, inevitably, be asked if he agrees with the government but if he doesn’t he’ll have to propose alternatives. But that’s not all…..

Doctors and nurses take time to train and, whilst the government is recruiting, the amount of postponed treatment is frightening. An obvious (partial) solution is the private sector, which wouldn’t worry a pragmatic social democrat like Blair, but Starmer’s party has been dragged left.

Most schools didn’t close, teaching the children of key workers, but there has been a terrible toll on many youngsters and it isn’t like paying a private hospital to do knee replacements. It may be that Johnson replaces Williamson with a competent heavyweight but there are no easy options and what would the militant teaching unions say about catching up through a longer school day or shorter holidays?

Historians will speculate as to whether Trump might have been re-elected had the pandemic been at the start of his presidency but Johnson and his government have learnt important lessons. With Starmer and his party trailing in the polls the difficult road ahead for the Conservatives doesn’t mean open goals for Labour.