The Yes to AV campaign has got itself in hot water after being caught red handed this weekend axing the face of Benjamin Zephaniah from its campaign material. His image was removed from leaflets being delivered outside of London.

The Yes! To Fair Votes campaign replaced Britain’s most famous black poet on literature with ‘Blackadder’ actor and TV presenter Tony Robinson and then proceeded to make matters worse as it got into a row with opponents on Twitter.

Considering how the Yes campaign has been dismissing claims by the No To AV campaign that the BNP would be a winner under the alternative vote it seems an odd decision to remove Zephaniah’s face from what can only be over  fears that his dreadlocked image won’t play well in less ethnically diverse areas such as Cornwall or Sussex among others.

The Yes Campaign has denied it kept the black poet off leaflets, but its denial is hard to swallow when you look at the leaflets below, which are up on the Newstatesman blog. Now you see him now you don’t. 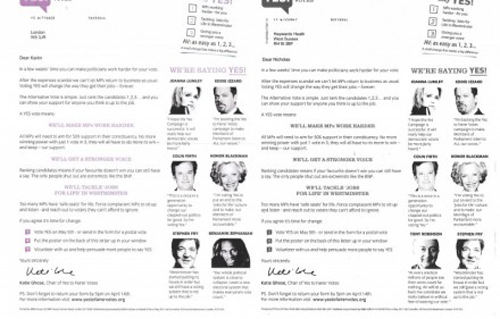 The Zephaniah story reflects very poorly on the Yes campaign and has already spawned a dozen or more stories with headlines like “The Yes to AV campaign must think the West Country is packed with racists” in the Telegraph.

Terry Paul, a spokesman for the no campaign, told the Guardian: “Why are Yes to AV ashamed to have the support of Benjamin Zephaniah in places like Cornwall and Hampshire? The yes campaign’s leaflet offers a chilling preview of politics under the alternative vote. We have warned that AV would encourage parties to pander to extremist opinions in a chase for second and third preference votes, but we never imagined the first example of such outdated views would come from the yes campaign itself.”

This is part of a longer post on social media that I wrote earlier on The Wall blog. Last week the two campaigns traded blows with separate video launches with the No campaign pushing the BNP line of attack. And it is true to degree, smaller parties whose candidates stand no chance of winning will have their votes counted not just once, but possibly two of three times. However, for me using the spectre of the BNP is a scare tactic.

What it should come down to is that AV is not a truly proportional system; it is overly complicated; and it will more than anyone else benefit one party. That party is the Liberal Democrats. If we are going to reform our electoral system let’s do it properly. AV doesn’t do that. Most small parties who are losers under first past the post will remain losers under AV. They just get their vote counted a few more times.