NO to AV launches the next phase of its campaign this week kicking off today with some poster and press ads. Not sure you can spell it out much more clearly than this. 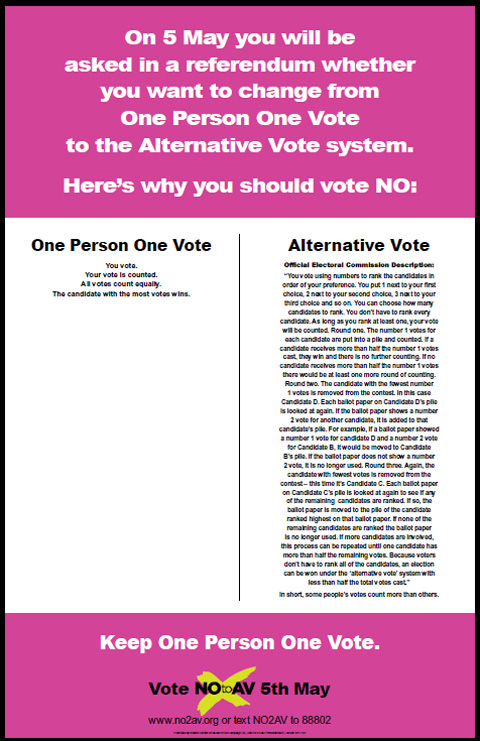 Unlike the previous misfiring ads that first launched the No campaign, which focused on the £250m figure that the Alternative Vote would cost to implement, the new work neatly contrasts the simplicity and fairness of the current One Person, One Vote system with the complexity and unfairness of the AV.

They do what they are supposes to do and tell the voting public exactly what they need to know. If you vote for, and we get AV, those individuals who support smaller parties, like the BNP, will have their vote counted several times.

Joan Ryan, NO to AV Deputy Campaign Director,  “With the launch of One Person, One Vote, we provide those who know that AV is the wrong change with a simple reason to reject it. For centuries, generations of reformers were inspired by a simple principle. They believed that because each person is equal, they should each have an equal vote. Right now, 2.4 billion people choose their governments using first-past-the-post. That’s 2.4 billion people – each with one ballot paper and one, equal, vote.”