ABC News star correspondent Diane Sawyer has been reporting from Damascus in recent days– including an “exclusive” interview with President Bashar al-Assad (the first time I’ve heard him speak English). 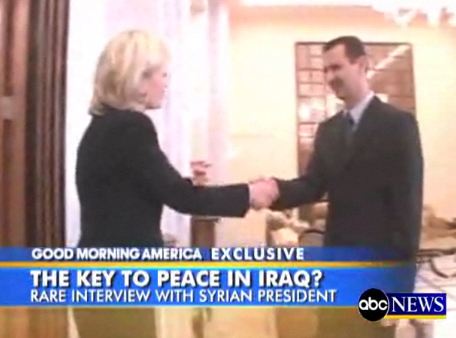 Sawyer asked a few “difficult” but polite questions about human rights, democracy and the Hariri assassination in Lebanon– which Assad easily deflected, and which she did not follow up. But mostly the whole series of reports looks like a carefully-crafted PR exercise for the Assad and his regime, giving the impression of a young, modern, reform-minded leader who wants to play a positive role in the Middle East– if only the US and Israel will let him.

Here, on the other hand, are some of the question Sawyer forgot to ask the Syrian president:

–Why was the neo-Nazi David Duke invited to speak at a Damascus rally in your honor and interviewed respectfully on state-controlled Syrian TV?

–What did you mean when you accused Israelis of trying to “kill the principles of all religions with the same mentality in which they betrayed Jesus Christ and…the Prophet Mohammed”?

–When you said Lebanese prime minister Siniora “is a slave working for a master who is himself a slave getting his orders from his bosses,” who is the master and who are his bosses?

–When will you end Syria’s 44-year “State of Emergency”?

–What happened to Dr. Shakir Al-Dujaily?

–Why did you ban wardytron’s blog?

Perhaps reader davem, who has spent time in Syria and discovered the blog ban, can suggest some more questions that Sawyer missed. If she had done her homework and taken her job seriously, Assad would not have been laughing and smiling as much as he did.

Update: davem, in Damascus, has some thoughts in the comments.