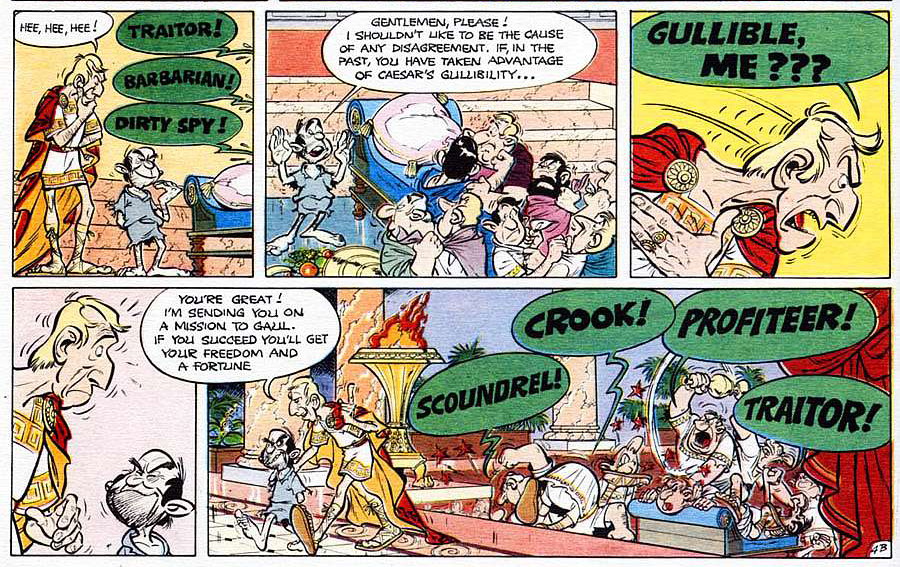 If you are the sort of (increasingly rare) person who pauses for thought, here’s something to ponder: What if the polarisation of society has reached the point where we are so desperate to believe that society will collapse into hatred and violence if a party we oppose wins an election, or a policy we disagree with is passed, that we seize on any story which supports our desire for this affirmation?

Are we so willing to believe that people who were decent yesterday will not still be decent tomorrow if we don’t get our way?

How else do we explain our attachment to the narrative of a massive escalation in hate crime following Brexit in the UK and Trump in America when more and more high-profile cases turn out to be staged, or based on outright lies?

I have reached the point where I am sceptical of the repeated claim that there has been a significant escalation in the number of hate crimes. There are three reasons for this:

The worst of these hoaxes sets the media – both mainstream and social – aflame, further polarising a society which seems more than willing to ‘pick a side and cheer’ before the full facts have emerged.

In the last couple of months there have been three high-profile cases. Each was distilled into an obnoxious social-media ‘meme’ which was shared by hundreds of thousands of people, and attracted outraged comments from millions of furious fingers flying over keyboards. Shamefully, it was often politicians, celebrities and journalists with a premium following who got the snowball of lies rolling. gathering misinformation, conjecture and plain insanity as it went.

Which of us does not have friends on social media who have hair-trigger reactions and fire off these virtue-signalling memes before the High Noon bell of reason even rings? Here are the three cases which polluted my timeline recently: 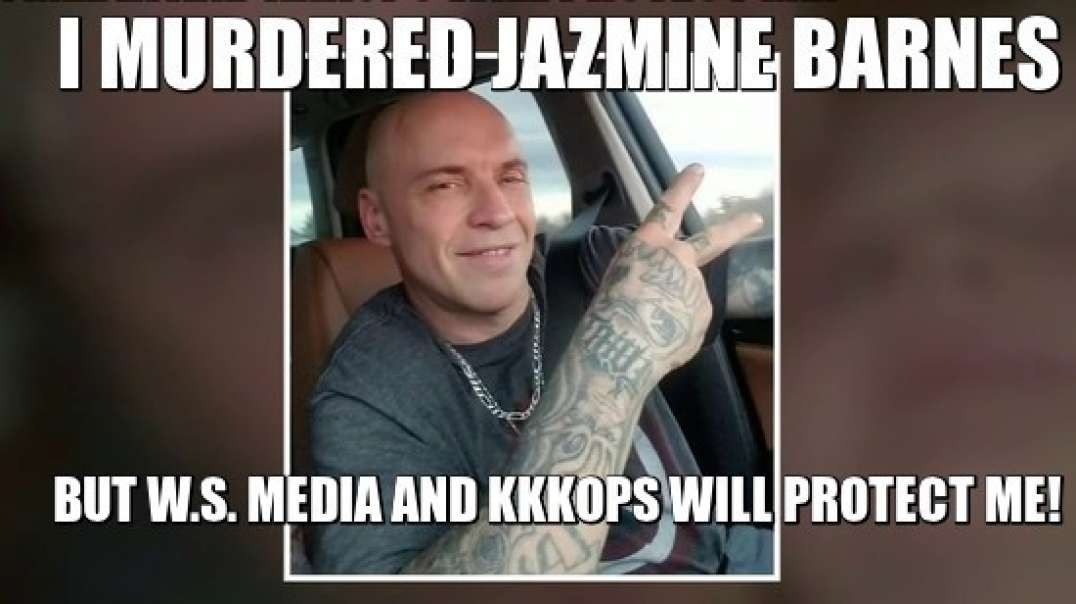 Jazmine Barnes was a 7 year old black girl who was shot dead in a drive-by shooting. Her mother claimed the shooter was a white man in his 30s or 40s driving  a pick-up truck. The police were provided with an identikit. The face of a local white man who seemed to fit was turned into the meme above and widely shared, along with its conspiratorial message. Social media fumed. Op-eds were written on the state of racism in America. The now-obligatory “GoFundMe” page was set up, raising almost a $90.000 in days. A civil rights lawyer for the family declared that he had “no doubt that the family was targeted because they were black.”

“We want to emphasize the racial nature of the attack and that hate-crime charges are appropriate,” he boldly told the media. The suspect was tried and convicted on social media. Death threats to his family followed.

But then arrests were made. There was no Trump-supporting white man. The killers were two black men.

Usually getting something so wrong and the truth being such a shock would prompt people to take a step back and re-evaluate their behaviour, but within a fortnight of this revelation, a new meme was firing people up. 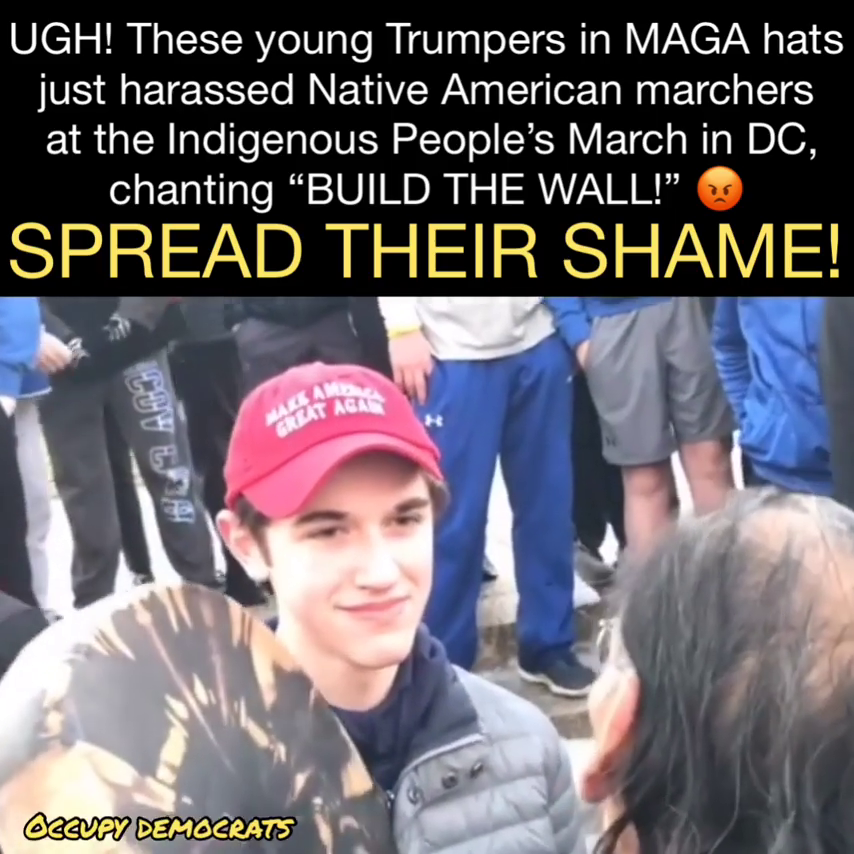 I shan’t rehash the Covington case – which I covered a few weeks ago – but suffice it to say they have been cleared by an independent investigation and they have hired some high-powered lawyers.

In this case – as with the first – the social-media trial by increasingly robust virtue signalling reached fever pitch, with the same politicians, celebrities and journalists weighing in, inciting all sorts of retribution before the full facts emerged.

Twice stung in one month, you’d think that people would be more cautious before ramping up the outrage and shrieking that “Trump’s America” is a place where terrible people do terrible things, but once again, you’d be wrong. Enter Jussie Smollett: 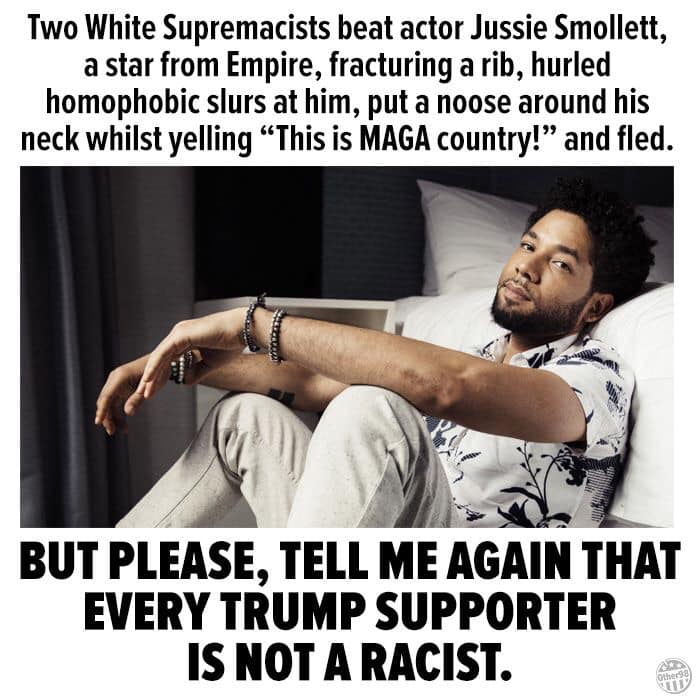 Smollett is a b-list celebrity, one of the stars of the TV show “Empire”. He claimed he was attacked after he left a Subway sandwich shop at 2am by two masked white men shouting “This is MAGA country!” and using racist and homophobic language, insulting his TV character, tying a noose around his neck and splashing him with acid. His story seemed implausible from the start. It was sub-zero temperatures in Chicago at the time, so the likelihood of racist gay-bashers roaming the streets equipped with a noose seemed far-fetched; that even the most fanatical Trump supporter would believe that Chicago was ‘MAGA country’ was bizarre; that white-supremacists would be familiar with a TV-show like Empire – about the rap-music business, with an almost-entirely black cast – is unlikely. What’s more, his entire journey from Subway to his apartment was caught on CCTV, except for the 60 seconds when the attack allegedly took place, after which he emerged still carrying his sandwich, and exhibiting none of the injuries claimed.

To cut a very long story short. Two men were identified as the likely attackers on CCTV and arrested. Unfortunately they turned out to be two black Nigerian brothers who worked as extras on ‘Empire’ with Jussie Smollett. They confessed to having been hired by Smollett to help him stage the attack and were released. He is now being investigated, though he continues to deny he staged it.

His motive is unclear, but some have suggested that the “lynching” trope was an effort to support a new bill by the Democrats aimed at making lynching a federal hate crime. Since there hasn’t actually been a lynching in America in more than half a century, I don’t really understand the point of this bill. Perhaps someone could elaborate in the comments.

But in the lead-up to these revelations, social-media was aflame with virtue-signalling politicians, celebrities, journalists and activists decrying the state of race-relations and the rise of hate in Trump’s America. This is the common theme.

First of all, polarisation means that people divide the world into ‘the utterly good’ and ‘the irredeemably wicked’.  Many believe that those on the other side of the divide have always been utterly evil and are only awaiting permission – such as the triumph of Trump in the presidential elections – to unleash their violence. So these toxic memes are a ready-to-use and graphic “I told you so” to your doubters – friends and enemies alike.

To be fair, there may or may not be a rise in hatred resulting from events or shifts in the political landscape. It’s hard to say. But in the long-term, polarisation is a self-fulfilling prophesy; and it is just common sense that if people continue on this trajectory violence will be inevitable.

Finding that specific attacks are staged or misreported doesn’t necessarily mean that it isn’t the case that hate-crime is on the rise. It is plausible that there is a rise both in actual and faked hate-crime. But ‘on the rise’ or not, real hate-crimes do exist. With each high-profile hoax, is it less likely that people will believe real victims?

Unfortunately the answer is “it depends “. It depends entirely on whether or not the next report reinforces your own confirmation biases or not. The Right will be reluctant to believe anything and genuine victims will be harmed. The Left will continue to #believethevictim no matter what, feeding this credibility gap, and the tribes will continue to incite their respective followers to greater heights of indignation, outrage, and anger, until violent words spill into violent action.

Whatever your tribe, think before you repost a meme. In fact, it is time sensible people stopped engaging in this pernicious form of communication altogether. It will only end in tears.