First The Guardian. Now this forum for acolytes of the Democratic Peoples’ Republic of Korea and its Dear Leader. It’s getting harder and harder to tell what is and isn’t a spoof anymore.

I am terrored! A film has just arrived on the markets of Cameroon, this film the American Police Team or some name that is similar. My nephew, purchased this and asked me to watch because he said is had something to do with DPRK. The shock I see! The general, beloved general, Kim Jong Il is a puppet character in this film and speaking the most offending things! He swears in English, kills his interpreter, and turns into a small insect at the end. They make the Dear Leader to be evil man, and lonely man. They find risible the undying love of the Korean people? They think the leadership of DPRK and the revolution is a joke? Forgive me for saying but makers of this film are bastard people! I denounce them and curse them! Bastard people!

Can we not complain to someone about such slander? Why has not the KCNA denounced this piece of capitalist propaganda? To think that they make light of the general and debase his greatness!

That sounds like the recent film “Team America: World Police”. This was strongly denounced by the DPRK, and their embassies asked for the film to be banned in some countries, such as the Czech Republic. However, it is such a brainless piece of work that bears little relation to the art of cinema that it’s not worth extending too much anger about.

I stand with Comrade Kwango in saying that these are bastards. They should be found and smited good for their aggressions against the people of the DPRK and Generalissimo Kim Jong Il.

As for the Dear Leader himself, he is not amused. 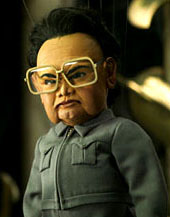