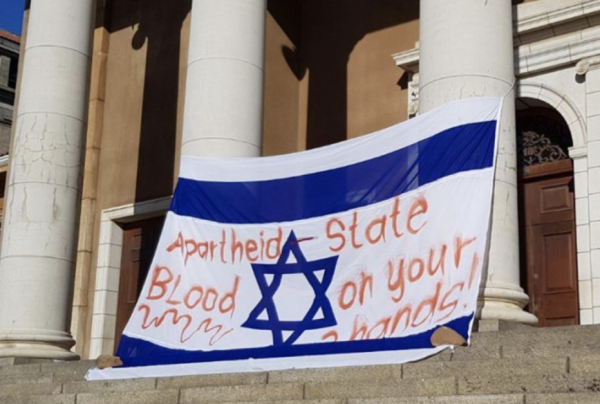 One of the great things about being an anti-Israel activist is that as a perpetual protester you never have to consider whether the alternative would be worse – in other words, what if your protest led to a change in policy? The answer is simple – just protest against that as well. Consistency is so boring.

For example, the evil Israelis built a light railway system in Jerusalem, but deliberately didn’t extend it to Arab areas. Shocking – apartheid in action, in fact, because  the system is excluding Palestinians from convenient access to the centre, so increasing joblessness and affect the poor in particular. Who could propose such an unjust arrangement? Well, that was the alternative to building on occupied land, which was the subject of so many complaints, including boycotts of Veolia and other participants in the project.

Many years ago, the complaint was that Israel had to make peace with its neighbours in order to justify its presence in the Middle East. So there were peace treaties with Egypt, Jordan, and now many others. Shock –  it turns out that many of these governments have lower standards of democratic governance than one would hope for, and by associating with them the Israelis are losing friends. Disgraceful…

Because Israel is essentially a bastion of white privilege, it is unsurprising that people of colour aren’t welcomed by the racist authorities – a sign of an exclusivist attitude totally at odds with multiculturalism. Shock – it turns out that various Indians, Ethiopians, Peruvians etc with little connection to Rabbinic Judaism have in fact been converted and permitted to move to Israel. Outrageous – this shows that the state is desperate to recruit anyone to help the demographic battle against the Palestinians – they should be ashamed of themselves. And by allowing converts at all, they are showing that they are a religion rather than a people, so have no claims to self-determination in the first place.

Israel has world class healthcare facilities, just miles from where Syrians are dying for lack of basic medical care – a typical demonstration of how the Israelis treat an Arab life as worthless – oh, hold on – they are in fact spending millions saving injured Syrians in hospital. That is appalling, partly because they are doing it in occupied territory (see argument about Jerusalem Light Railway, above) and partly because by not asking questions about the victims they may be helping Al-Qaida (which just shows they are a front for the Mossad, in any case). Of course, if the Israelis did question the injured about their political affiliation, you could imagine the headlines in the Lancet: “Israeli doctors pervert medical ethics by turning patients away to certain death due to their politics”. But who cares about the counterfactual when there is Israel-bashing to be done?

The Israeli state sees art as propaganda, so it’s no surprise that public funding is available only for performances parroting the government’s line, and this justifies a boycott of Israeli cinema and theatre. But wait a second! It seems that there is no such rule, and in fact Israeli embassies sometimes provide sponsorship to allow artists who are definitely not government supporters to present at local festivals – even worse! This means the festival is accepting money from the Israeli state – we’ll get a mob together to demand that it be stopped immediately.

As a reactionary and fundamentalist society, it is unsurprising that homophobia is state policy in Israel, which is why progressive groups in the US like to forbid stars of David on their demos. Oops, no, there is a large and flourishing gay community with the only Gay Pride event in the Middle East, and many Palestinians seek asylum to avoid the (often fatal) prejudice in the West Bank. That’s outrageous! It’s pinkwashing at its worst, as the Israelis are obviously trying to use gay rights to distract from the occupation. Stop it now! What might ask what exactly the Israelis should do, but that would credit “Queers against Israeli Apartheid” with rather more foresight than is justified.

Recent vaccine headlines are another excellent example of what would happen if Amnesty and the UN calls had been heeded.  “Palestinians become guinea pigs for inadequately tested vaccines” -“Israelis undermine Palestinian Ministry of Health”. “Oslo Accords ignored as Israelis try to play ‘white saviour’ to Palestinians, who have their own supply ordered”. It would be another nail in the coffin of the two-state solution.

What does this matter, you might ask? Every democratic country has its protestors, and these are often a ragtag bunch of people including the far left and the far right, who are happy to unite against something even though they could never agree on anything positive. States get things right and wrong. But only with Israel are the successes used as a stick as well as the failures.  No other country is accused of helping with disaster relief for propaganda purposes or to steal organs. Bluewashing and pinkwashing don’t exist anywhere else; No-one suggests that France operates ski resorts in order to avert the world’s attention from its colonialist history, or that Australia produces good wine in order to mask continuing discrimination against indigenous peoples. Anyone suggesting either of these would be considered slightly deranged.

Next time you hear someone grumbling about Israeli policy, ask yourself (and the complainer) what they think the alternative is. The answer may take some time…