There were endless cheers since the defeat of Labour in the 2019 general election and the loudest of those came from Jewish communities – not because they wanted Labour to lose, but because they hoped Corbyn and antisemitism within the Party would be banished. But these cheers would be short-lived – because whilst Jeremy Corbyn may not be the leader anymore – antisemitism still infests the Party. This is no truer than when Labour MP Zara Sultana tweeted her support for Palestinian prisoners in Israel, only to find out that some of them were guilty of murder and terrorism.

“the ongoing threat of settler colonialism, apartheid and occupation”.

Zara Sultana with her long history of support for the Palestinian cause sought to take up this offer of solidarity by tweeting (now deleted): 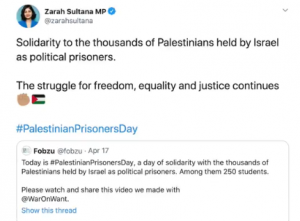 The tweet, which received seven hundred retweets and over 1.6k likes, was quickly criticised by those in the Jewish communities. The Israel Advocacy Movement responded with a video highlighting the issue with the tweet by claiming:

“We investigated why the prisoners in the video were in jail… one had slaughtered six Jewish students.

Terrorists are not political prisoners.”

Labour Against Anti Semitism (LAAS), a prominent group within the Party echoed these sentiments and urged Keir Starmer Labour Leader to take immediate action against Sultana. Yet despite this, the tweet remained live for a few days and the damage this was doing to cohesion between Jewish communities and the Labour Party continued.

To further add salt to the wound, on Yom HaShoah which is the Holocaust Remembrance Day, Sultana tweeted her sympathies to the six million Jews that were killed. For many Jews, they found this offensive, given her earlier apparent solidarity for Palestinian murderers and terrorists. If you want a flavour of how that was received, you only have to look at the replies she got. Either Sultana knew that some of these prisoners were murderers and terrorists, or she didn’t and surely this brings into question her judgment? What is clear is that many in the Jewish communities do no have faith in her as someone willing to stand up for them and this appears to be an unfortunate reoccurring theme within Labour. But is this an isolated event from Sultana, unfortunately not?

The Jewish Chronicle reported that in 2015 – Sultana used an alternative social media account – which is now deleted – to not only show her disdain for former world leaders, Tony Blair, George Bush and Benjamin Netanyahu but implied she would celebrate their deaths. But it didn’t end there, it was reported that again in 2015 Sultana, in her social media tirade, went on to accuse students of advocating a “racist ideology” and should be “ashamed of themselves” for attending Zionist conferences. If anyone has a track record of tackling antisemitism, it doesn’t appear to be Sultana.

It has been long documented that there is a problem of antisemitism within the Labour Party and dealing with it has become somewhat of a farce. Whether it was the disastrous Chakrabarti report which whitewashed there ever being an issue, or the recent internal Labour report into antisemitism which – instead of focusing on antisemitism – sought to make it about Corbyn being undermined. But this incompetence from the Labour Party appears to be a growing pattern, especially when it comes to Jewish communities. Take, for example, the uproar in adopting the IHRA definition on antisemitism. Something relatively easy to do, yet Labour still managed to make it an issue about them and not the Jewish community.

Either way, what is quite clear is that Labour cannot be trusted to root out the problem, especially when one of its own MPs appears to endorse murderers of Jewish students. Just because Jeremy Corbyn is no longer the Labour leader, doesn’t mean antisemitism has been banished. If anything, it is showing it is just as strong as ever despite Corbyn, and this is no doubt worrying the many Jews within the Party and those wishing to re-join.

As Yom HaShoah draws to a close, many in Jewish communities will rightly be reflecting on how there was a campaign that sought to bring the entire Jewish race to extinction. Not only have they had to live with this trauma all their lives, but they have also had to deal with systematically institutionalized antisemitism from the Islamists, the far-right and not so surprisingly the regressive far-left. They were driven out from their actual homes – the regressive left in the Labour Party are now seeking to drive them out of a natural political home many of them consider Labour to be – this cannot be allowed to happen.