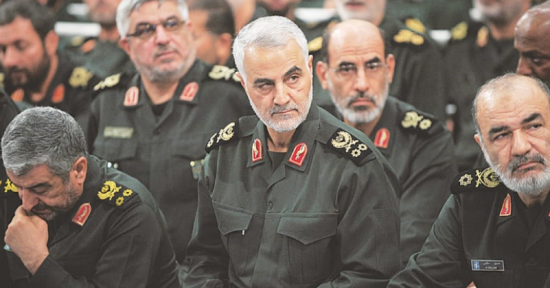 From the Times of Israel;

The US Department of Defense confirmed it had carried out the airstrike.

“We have always recognised the aggressive threat posed by the Iranian Quds force led by Qasem Soleimani. Following his death, we urge all parties to de-escalate. Further conflict is in none of our interests.”

Personally I can’t think of anyone with more blood on their hands, other than perhaps Assad, with whom Soleimani worked hand in glove to aid him in the massacre of his own populace.

This assassination serves as a reminder that when the Americans (regardless of who their President is) choose to act no one in the world can stop them.

Plenty of people, including in Iran, had written the Americans off but really did they think there was someone who could protect them?

Iranian strategists will be discussing how they should respond to this strike. They should consider doing whatever the Americans want.

Breaking: Official Iraqi TV is confirming the killing of Iranian Revolutionary Guards al-Quds brigade commander Qasim Soleimani (in what appears to be a US) strike on Baghdad airport https://t.co/07gl9Bhp3r

Tonight, there are hundreds of American families watching news of Suleimani’s killing particularly closely. He engineered attacks in Iraq, often with sophisticated IEDs, that killed hundreds of US service-members & wounded thousands more.

On Twitter, lots of Brits and Americans wailing and gnashing teeth over the death of someone most had never heard of before tonight.

On Telegram, hundreds of Iraqis and Syrians celebrate the news of Soleimani’s assassination.

Disparity could not be more stark.

This will put a target on the back of every American – military and civilian – in Iraq, and potentially beyond. It is unimaginable that Iran does not respond forcefully https://t.co/u0KrU9VdMC

This is a very dangerous moment. 17 years after the catastrophic decision to go to war in Iraq violence still rages every day. World leaders must stand up to Trump. The last thing we need is another all out war. https://t.co/dB04Zpx3Qf

This is an extremely serious situation. There’s a clear danger of further violence and escalation in the Middle East. We need to engage, not isolate Iran. All sides need to de-escalate tensions and prevent further conflict. https://t.co/ro2bJpk7jl

Congratulations to all involved in eliminating Qassem Soleimani. Long in the making, this was a decisive blow against Iran’s malign Quds Force activities worldwide. Hope this is the first step to regime change in Tehran.

The US assassination of Qasem Soleimani is an extremely serious and dangerous escalation of conflict with global significance. The UK government should urge restraint on the part of both Iran and the US, and stand up to the belligerent actions and rhetoric coming from the US.

A top Iranian general, Qasem Soleimani, has been killed by US forces in Iraq

Hezbollah leader Hassan Nasrallah breaks down in tears over #Soleimani‘s death. As has the Supreme Leader & figures across Iran. Key is that if they did NOT cry they’d look bad. These are some of the most brutal guys around. Interesting to note different concepts of masculinity. pic.twitter.com/wT218l3omT

Attempts to predict what happens next are futile.
Here are the 4 key questions in wake of Soleimani’s killing:
Will Iran abandon caution?
How will losing Soleimani effect Iran?
What was Trump trying to achieve?
Does anyone in the White House have a plan? https://t.co/PXzYR0n6vF

This tough guy bravado bullshit from people who have no idea what consequences America has just unleashed and won't suffer those consequences themselves. For those too young to remember, this is what it was like in 2003

Trump's dangerous escalation brings us closer to another disastrous war in the Middle East that could cost countless lives and trillions more dollars.

Trump promised to end endless wars, but this action puts us on the path to another one.